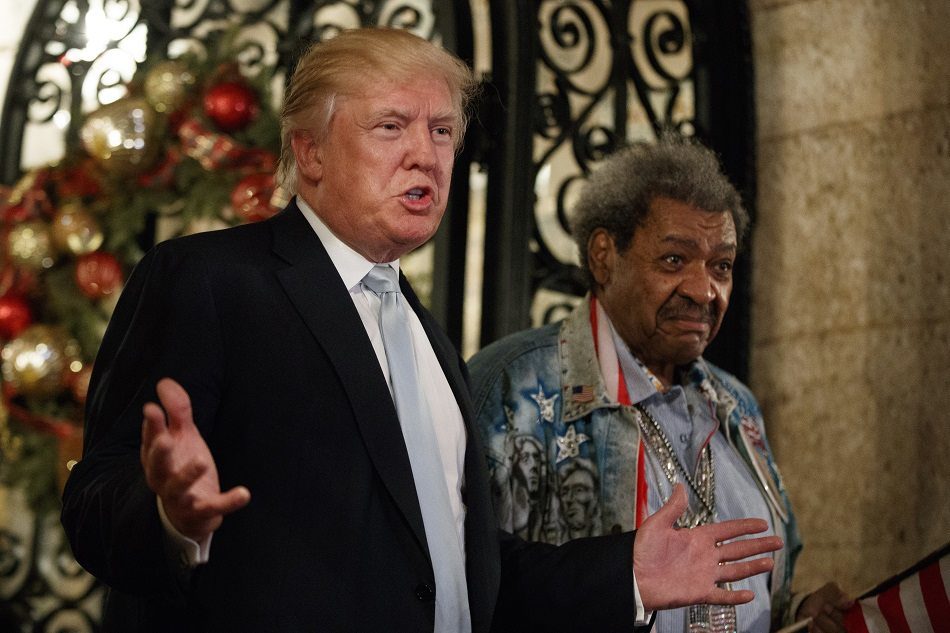 The normalization of the abnormal under President-elect Donald Trump reached surreal new heights when he used a bizarre six-minute press availability to, among other things, urge reporters and the American people to get over Russia's role in hacking the 2016 election.

It is easy to get lost in the surreal nature of President-elect Donald Trump emerging from his Mar-a-Lago palace with boxing promoter Don King at his side to dole out a handful of comments to an eager press corps. But even within this odd spectacle, Trump's self-serving statement on Russia hacking ought to be blaring front-page news.

Asked if he would back sanctions against Russian President Vladimir Putin over the Russian cyber crimes that the CIA and FBI agree were undertaken to help get Trump elected (and which were directed by Putin himself), Trump said we should all "get on with our lives:"

REPORTER: Mr. President-elect, Senator Graham today said that they're putting together a sanction to go after Putin personally. Will you back that?

TRUMP: Senator Graham ran against me. I haven't spoken to him.

REPORTER: What do you think generally about sanctions against Russia?

TRUMP: I think we ought to get on with our lives. I think that computers have complicated lives very greatly. The whole, you know, age of computer has made it where nobody knows exactly what's going on. We have speed, we have a lot of other things, but I'm not sure you have the kind of security that you need. But I have not spoken with the senators, and I certainly will be over a period of time.

This was an utterly bizarre event, once again showcasing Trump's terrifying inability to personally let anything go by taking shots at a guy who dropped out of the Republican primary before a single vote was cast — even as Trump is urging the rest of us to "get on with our lives" regarding Russian interference in our presidential election.

But Trump's brazen attempt to whitewash Russia's role in hacking the election, with direct encouragement from Trump himself, must not be gotten over but rather ought to be top of mind with every responsible journalist and attentive citizen.

While Democrats and a few principled Republicans seek true accountability for this unprecedented and dangerous intrusion, Republican leaders are ready to sweep it all under the rug — and Trump himself has even tacitly endorsed the interference.

My colleague Melissa McEwan recently asked Republican leaders, "Where is your patriotism?" and thus far we have seen little to answer her query. It is time we asked the same question of our corporate media, which continue to let democracy slip through their fingers by denying this issue the urgency it deserves.