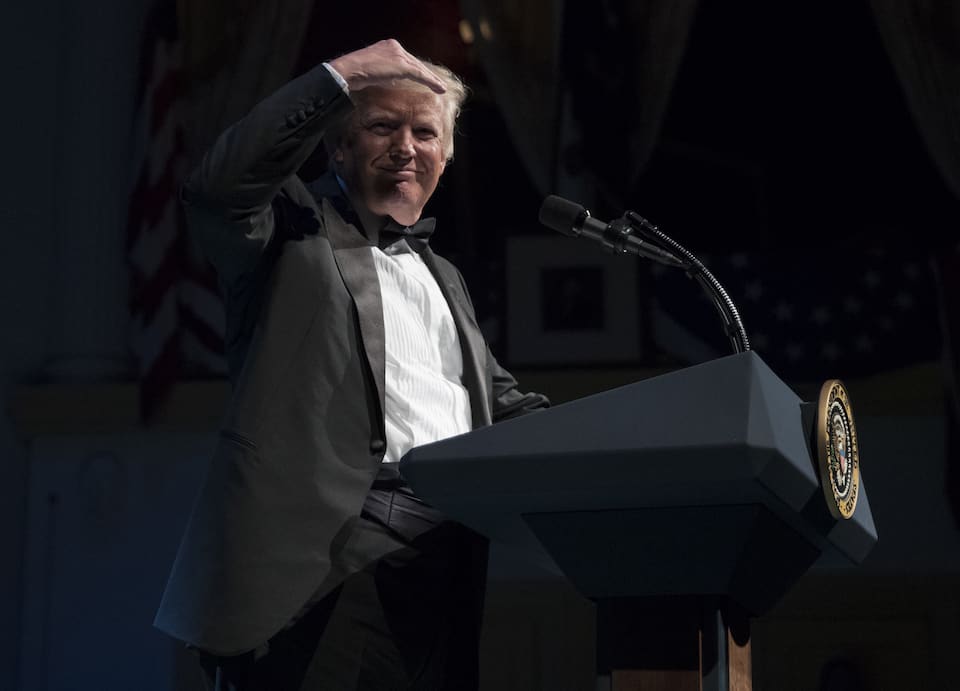 In another early morning tweet storm, the president lashed out at his own Department of Justice and the entire judicial system, in a move that will almost certainly come back to haunt him as his team tries to defend his blatantly racist Muslim ban.

The latest White House strategy to have lawyers vet Donald Trump's tweets to prevent him from being his own worst enemy is not going so well.

On Monday morning, despite the best efforts of his administration to argue that Trump's Muslim ban is not in fact a ban at all, Trump, in typical fashion, issued an early morning tweet storm declaring otherwise:

People, the lawyers and the courts can call it whatever they want, but I am calling it what we need and what it is, a TRAVEL BAN!

This statement alone is certain to cause further problems for Trump. In the most recent ruling from the 4th Circuit, for example, the court described Trump's ban as "an Executive Order that in text speaks with vague words of national security, but in context drips with religious intolerance, animus, and discrimination."

The court also declared that Trump's many statements as a candidate and as president have made clear his "desire to exclude Muslims from the United States."

In a single tweet, Trump undermined his own Justice Department and its attempts to persuade various courts that his ban is not actually a ban at all.

But Trump's meltdown got worse from there, with Trump attacking his own Justice Department for implementing the bans he signed.

The Justice Dept. should have stayed with the original Travel Ban, not the watered down, politically correct version they submitted to S.C.

The Justice Dept. should ask for an expedited hearing of the watered down Travel Ban before the Supreme Court - & seek much tougher version!

It is not news that Trump lacks the most basic understanding of how government works. After all, when he first moved into the White House, he and his team were were apparently stunned to learn that they would have to hire their own West Wing staff.

But for Trump to attack his own Justice Department for the bans he signed is truly breathtaking. Trump signed both of those executive orders, even if he did not bother to read or understand what they would accomplish, other than a vague idea that they would fulfill his campaign promise to ban Muslims.

To suggest, as he appears to, that his own Justice Department went rogue in pursuing a second executive order would be amusing if it weren't so frightening. Because it shows, again, that Trump has no idea what he is doing, what his job is, or what happens when he signs documents in his capacity as president of the United States.

But, to ensure that his morning tweet storm would inflict maximum damage upon himself, Trump reverted to one of his favorite attacks: an attack on the courts.

In any event we are EXTREME VETTING people coming into the U.S. in order to help keep our country safe. The courts are slow and political!

Trump and his administration have repeatedly attacked judges who do not give Trump what he wants. As a candidate, Trump launched a blatantly racist attack on Judge Gonzalo Curiel, whom Trump accused of having "an inherent conflict of interest" because of his Mexican heritage.

In April, Attorney General Jeff Sessions attacked U.S. District Judge Derrick Watson of Hawaii, who had issued an unfavorable ruling on Trump's Muslim ban. Sessions declared that he was "amazed that a judge sitting on an island in the Pacific can issue an order" to stop Trump from implementing his ban.

Trump's ban — and it is clearly a ban, as he himself has insisted — is racist, unconstitutional, and in no way designed to ensure the national security of the country. That's what every judge thus far has ruled. Attacking his own administration, not to mention the entire justice system as "slow and political," is not likely to change anyone's mind.