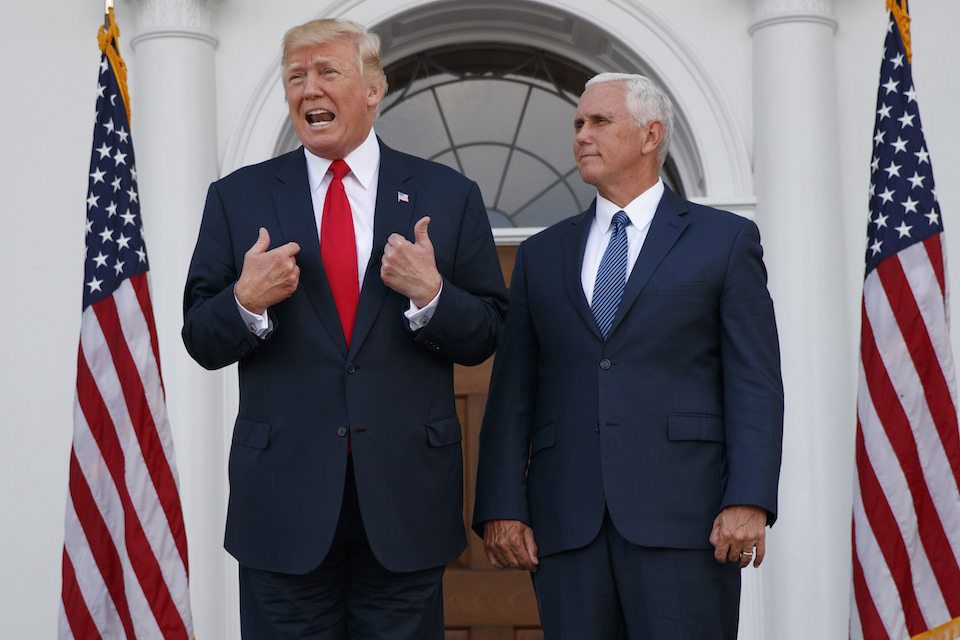 The 2020 election is more than 1,100 days away, but Donald Trump is desperately raising money and strategizing for the race while Republicans, including his own vice president, steadily prepare to undermine him.

After less than eight months in office and with events spiraling out of control on a daily basis, Donald Trump is now ramping up his re-election campaign. He is doing so in the shadow of his own vice president, Mike Pence, who has already assembled many of the essential components to run a strong and credible presidential campaign of his own.

Politico reports that Trump is "rankled by reports that other Republicans are preparing to run in 2020 if the president falters." The most prominent Republican is certainly Pence, who has a PAC to boost congressional candidates who could then endorse him, has held meetings with potential donors at his official residence, and has crisscrossed the country to swing states over the last few months.

Trump, whose approval rating has plummeted even from its very low starting place, is preparing a fall fundraising tour for an election that is over 1,100 days away. His team is also reportedly tracking potential rivals on the Democratic side, while the RNC has singled out leading Democratic senators who could run against him, attacking them in press releases.

States like North Carolina are already being targeted by Trump's political operation. There aren't any significant races in that state in the 2018 cycle, but Trump beat Clinton there by less than 4 percent and the RNC is already making preparations for a fight.

Trump's pollster has also reportedly told Trump that he needs to keep up his smear campaign against the mainstream media to keep his shrinking conservative base with him, and Trump has continued to do so, lamenting "fake news," and blaming them for his own failure to unify the country.

Trump won the White House only by squeaking out an electoral college win, and lost the popular vote by nearly 3 million votes against Hillary Clinton. That result came when people were concerned about the potential downside of his presidency. Should he make it to 2020, he will be carrying the baggage of failing at nearly every aspect of the job.

America's international allies no longer trust the country after Trump has careened from one international mistake to the next, and on the domestic front, things are even worse. Trump has no major legislative achievements, and cannot even get on the same page as his own Republican Party.

And he continues to court and praise and make excuses for white supremacists, Nazis, and other racist groups.

At the same time, he, his family, and his campaign inner circle are the focus of multiple probes into Russian meddling in the election that put him in power in the first place. All the fundraisers in the world can't make the findings of an FBI or special counsel investigation go away.

Trump has significantly accelerated his re-election schedule, scheduling multiple campaign rallies in states he carried and hosting fundraisers at his hotel, which has the added benefit for Trump of putting money right into his pocket.

With members of his own party questioning whether he is fit for office, and his own vice president not so quietly making his own plans for 2020, Trump appears increasingly afraid that he won't be able to hold on to his job.