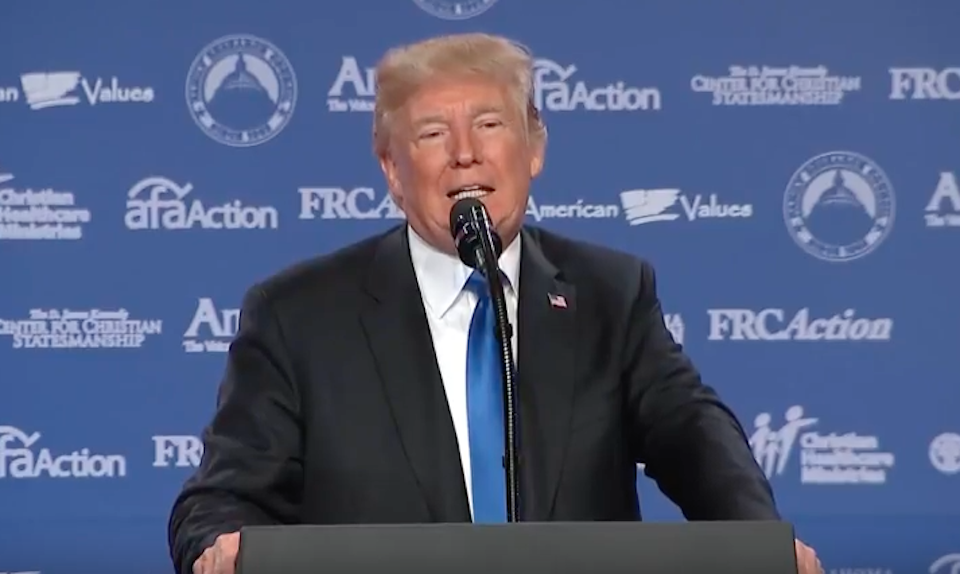 Donald Trump's legislative agenda has been such a complete failure, he's now bragging about saving the word "Christmas."

Donald Trump has accomplished so little in the first nine months of his presidency that he was forced to declare victory in the fictional "war on Christmas."

Trump did not emulate fellow Republican George W. Bush and make his triumphant comments from an aircraft carrier, but instead did so at the Values Voter Summit, an annual meeting of right-wing hate groups.

People "don't use the word Christmas because it's not politically correct," he complained. "You go to department stores and they'll say 'Happy New Year' or they'll say other things. It'll be red, they'll have it painted but they don't say."

TRUMP: And something I said so much during the last two years, but I'll say it again. As we approach the end of the year, you know we're getting near that beautiful Christmas season that people don't talk about anymore. They don't use the word "Christmas," because it's not politically correct.

You go to department stores and they'll say "Happy New Year" or they'll say other things. It'll be red, they'll have it painted but they don't say. Well, guess what? We're saying Merry Christmas again.

Before the speech, Trump retweeted former Fox News host Bill O'Reilly. The timing was fortuitous, because in addition to sharing a fondness for groping and harassing women, O'Reilly was Fox's lead propagandist for the fictional confrontation each December.

The "War on Christmas" does not exist but has been a convenient conservative talking point in an attempt to bludgeon the left on so-called values. Leading progressive figures like President Barack Obama and Secretary Hillary Clinton never showed any reluctance to tell people "Merry Christmas," but scaremongering on the topic has been a staple of Fox News and the right.

Trump secured the Republican nomination and the presidency by pandering to many of these made-up right-wing media themes and lies.

While addressing the friendly and supportive crowd, Trump failed to mention any legislative victories since he became president because he has none. The effort to repeal Obamacare has been killed several times and was woefully unpopular, while he has yet to even offer bills on issues like taxes or infrastructure.

Trump's biggest achievement was the installation of Supreme Court Justice Neil Gorsuch, who assumed the position only because of the work of Senate Majority Leader Mitch McConnell, who stole the seat by refusing to hold hearings, let alone allow a vote, on Obama's nominee for nearly a year.

So Trump resorted to bragging about winning a non-exist Fox-created war as some sort of significant accomplishment.

Trump remains extremely unpopular, and his popularity has never gone into positive territory for the entirety of his presidency.

The contrast with his predecessor is striking. At this point in 2009, Obama had signed the sweeping Stimulus Act into law, which rescued the economy and set the table for billions in economic growth after decline under Bush.

At this point in his presidency, Obama was at 54 percent approval, 17 percent ahead of where Trump is now.

That's why Trump had to declare victory in a war that does not exist.