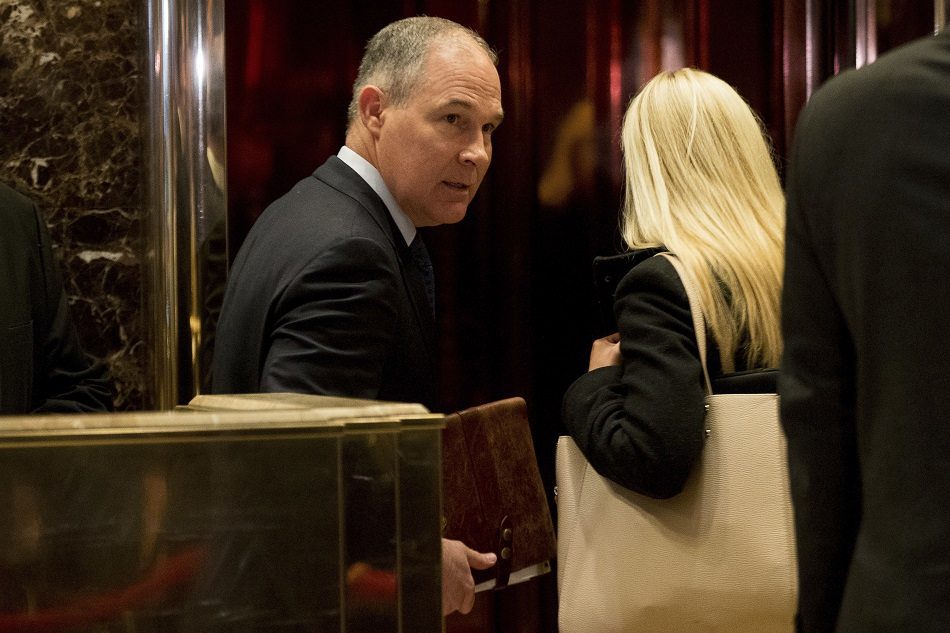 President-elect Donald Trump has named Oklahoma Attorney General Scott Pruitt to head the Environmental Protection Agency (EPA). Pruitt, whom the New York Times charitably describes as an “ally” to fossil fuel interests, is a climate change “skeptic” who has spent years fighting the EPA in court:

Since becoming the top prosecutor for the major oil and gas producing state in 2011, Pruitt has launched multiple lawsuits against regulations put forward by the agency he is now poised to lead, suing to block federal measures to reduce smog and curb toxic emissions from power plants.

He is also a leading figure in a legal effort by several states to throw out the EPA‘s Clean Power Plan, the centerpiece of Obama’s climate change strategy that requires states to curb carbon output.

Another one of those leading figures? Indiana Governor and Vice-President-elect Mike Pence. Pruitt is yet another cabinet-rank pick with Pence's fingerprints all over his selection. When Trump selected Pence as his running mate, Pruitt was highly complimentary: "Mike Pence is a governor and a solid conservative choice who understands the issues of federalism at a very personal level." The feeling appears to be mutual.

The pick has immediately drawn criticism from environmental groups, including the venerable Sierra Club, which said in a statement: "Having Scott Pruitt in charge of the U.S. Environmental Protection Agency is like putting an arsonist in charge of fighting fires."

Indeed, as state Attorney General, Pruitt repeatedly sent letters to federal government officials, including President Obama, under his own name that were actually written by energy company lawyers.

Just for good measure, Pruitt is also an opponent of marriage equality, and supports companies' ability to deny coverage for preventive care to their employees.

“Attorney General Pruitt’s reluctance to accept the facts or science on climate change couldn’t make him any more out of touch with the American people – and with reality. Climate change is one of the biggest threats facing our country and the world today, and we must take it seriously and take action to address it. President-elect Trump promised to break the special interests’ grip on Washington, but his nomination of Mr. Pruitt -- who has a troubling history of advocating on behalf of big oil at the expense of public health -- only tightens it. I expect he will have to answer many tough questions throughout the nomination process to address these significant concerns.”

The Democratic National Committee also blasted the selection in a statement emailed to Shareblue by DNC Spokesperson Eric Walker:

“It’s clear by now that Donald Trump lied to voters about draining the swamp, and his selection of Scott Pruitt to head the EPA puts a giant oil rig right in the middle of it. Scott Pruitt is a climate change denier with a long history of opposing clean air laws. His re-election was bankrolled by special interests, and he allowed energy lobbyists to put their words on his official letterhead opposing rules to protect the air we breathe and the water we drink. In one glaring example, Pruitt took $125,000 from Devon Energy to fund the Republican Attorneys General Association while giving the energy giant ‘special access’ and ‘other perks’.

“By putting a puppet of Big Oil in charge of the EPA, Trump shows he doesn’t think much of protecting the environment, combating climate change, or draining the swamp.”

If he is confirmed, Pruitt will have wide latitude to roll back environmental regulations and gut enforcement of existing ones.

It has never been a good idea to put a fox in charge of the henhouse — unless the intent is to destroy the hens.