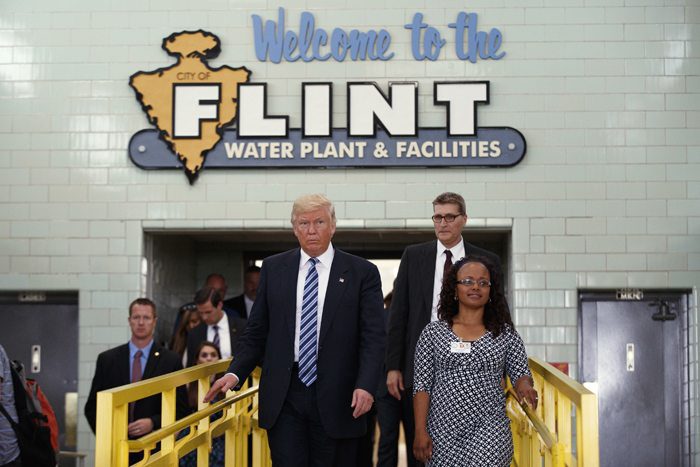 Donald Trump has said some very offensive and insensitive things during this campaign. It's kind of his speciality. But anytime one imagines he's hit the nadir, he finds a new low. Today in Flint, Michigan, site of a devastating and ongoing water contamination crisis, he toured the water plant at the center of the crisis and praised the "very, very good executives" he'd met there.

Donald Trump showed up in Flint with short notice, which was decidedly unhelpful. Flint Mayor Karen Weaver told the Detroit News, "Unexpected visits like this are difficult for us."

But Trump was less interested in being helpful to Flint than using a photo op in Flint to help his campaign.

Michigan AFL-CIO President Ron Bieber gave a pretty blunt assessment of Trump showing up less than 60 days from Election Day and months after Hillary Clinton first lent her support to Flint: "Here we stand, less than 60 days out from a presidential election, and now Donald Trump decides to roll into town for a photo op? Give me a break."

And that was before Trump toured the water plant and heaped praise on its executives. Watch (compliment to executives is at 0:40):

Lest there be any doubt that Trump is well aware of the severity of the ongoing water crisis in Flint, he had no hesitation in using it for some horrendous wordplay during his later speech:

One presumes his concern for laid-off auto workers also only goes so far as this quip. After all, if they're not working, they're part of the 50 percent he says are sitting back and letting other people carry them.

Another day, another example of why working people who want clean water to come out of their taps shouldn't want Trump anywhere near the Oval Office.