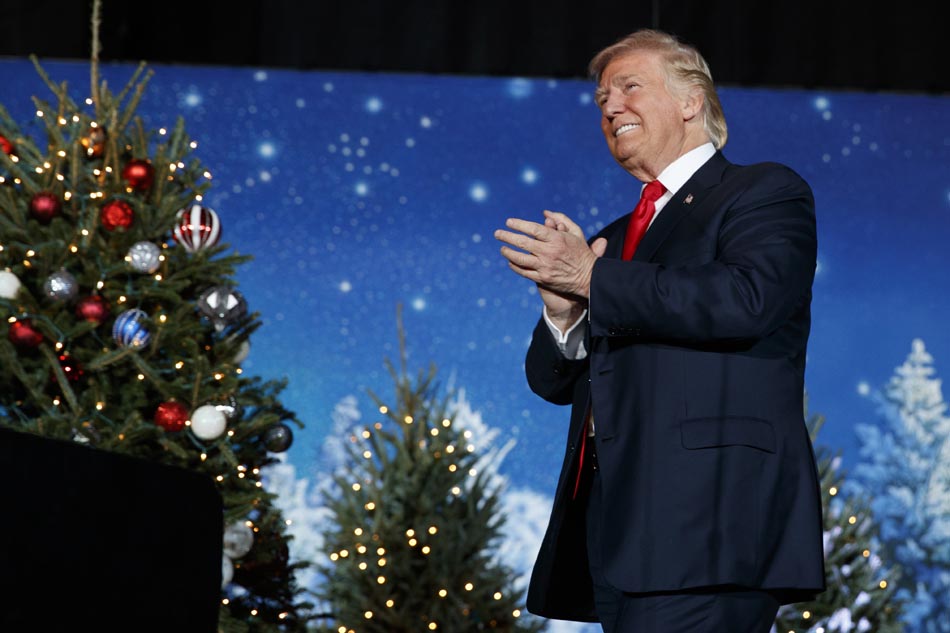 President-elect Donald Trump continued his campaign against the free press by hosting an off-the-record bash at his Mar-a-Lago estate, where members of his press corps allowed themselves to become the subjects of stunning, shameful propaganda.

Off-the-record press events have long been a controversial aspect of presidential coverage, but there has never been one quite like the gathering that President-elect Donald Trump recently hosted for the reporters who cover him.

While no reporting was allowed at the posh Mar-a-Lago event, pictures were permitted. And what pictures they were. There was this grand photo of the generous host, posted by CNN's Jeremy Diamond:

President-elect Donald Trump & his wife Melania hosted reporters camped out in Palm Beach, Florida to cover his movements for an off the record gathering at his Mar-a-Lago residence Sunday night.

More damning, though, were the excited tweets of Politico and Axios co-founder Mike Allen, which culminated in the ultimate prize for Trump:

Christmas at Mar-a-Lago: @realDonaldTrump hosts press pool! We were magged here by Secret Service on way in . @axios pic.twitter.com/OWBh0a0vTB

This event is unacceptable on many levels, not the least of which is that Trump has been on a crusade to intimidate and marginalize reporters, often by name. And now they have stunningly abetted his campaign of hostility toward a free press.

By agreeing to go off-the-record, these press members have ensured that the world will only see what Trump wants them to see of this event: A rapt press corps living it up at a glamorous party, hosted by a generous and fun incoming president.

At Trump's last off-the-record, he intimidated and berated the press, then had his own team leak rosy reports of the meeting that were only revealed to be false, ironically, because there were other non-journalists in attendance who took offense. This should have been the signal to journalists that Trump cannot be trusted.

The press should not have agreed to this OTR, and they should not agree to another one. With Trump's observable history of self-aggrandizing pronouncements and talent for media manipulation, allowing him hours of off-the-record interaction is a dereliction of journalistic duty.

At best, it allows Trump to soften up the press by promising who-knows-what, with no accountability. At worst, it is a blank check to make reckless statements and feed the press disinformation, all while gifting Trump with a trophy to hang on his wall.