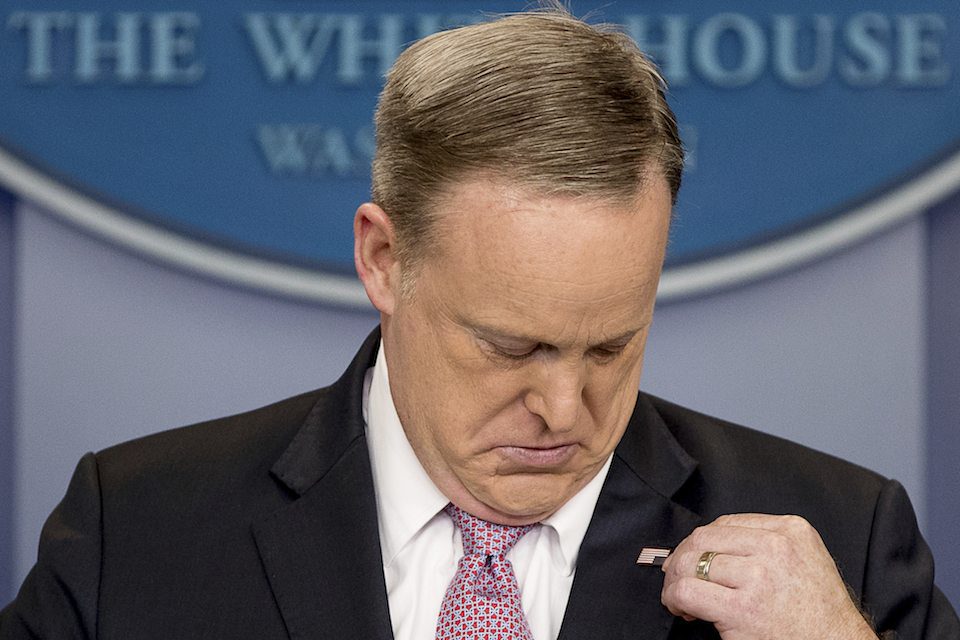 While shopping in an Apple Store, an American woman took advantage of a chance meeting with Donald Trump's Press Secretary, Sean Spicer, to ask him some questions about his and the Trump administration's actions:

Asking @PressSec questions in Apple Store since he doesn't like the press. https://t.co/l493z2gG4x

Notably, Spicer responded to her questioning by saying, in part: "Such a great country that allows you to be here."

That's right: He told an American woman of Indian descent who was literally "born in the USA" that the United States "allowed" her to be here, apparently because her skin is brown:

When @PressSec gets questions from a real American, he says the U.S. "allows" her to be here. Because she's brown. https://t.co/wKXlaxok8L

.@PressSec tells an American woman, this is "such a great country that ALLOWS you to be here" - presumably because her skin is brown: https://t.co/ZHQ1HaLXjY

When I asked this young woman, Shree Chauhan, how she interpreted Spicer's remark — whether "be here" was in reference to her being in the Apple Store or being in the United States — she confirmed that she felt he meant allowed her to be in this country.

Play the video again. Pay attention to what HE says. @PressSec said I am "allowed" here. Like I'm not a citizen. An implied threat. https://t.co/r9tvFkW7hS

When Chauhan received feedback that her approach to Spicer was somehow harassment, she was ready for the criticism:

Normally it is DC decorum to let folks be. But not anymore.

If you see the #TrumpKlan around do your duty. Speak truth to power. #Resist https://t.co/r9tvFkW7hS

Thank you for your opinion Ryan.

I did the best I could under circumstances. I am an everyday citizen who LOVES this country.

Find something better to do with your time. https://t.co/joBl3EqBbV

Like democracy is under threat but please be more polite about defending it! 🙃🙃🙃 https://t.co/Cgot3tYjWP

They can shove their spin. I can defend myself.

I care that they are breaking up families, bullying brown people, going after trans kids... https://t.co/Iko5BzEL4J

Patriots don't allow families to be torn apart, trans kids to be bullied, & TSA-pre-checked citizens to be strip-searched at the airport. https://t.co/Nzq2iXJOMD

The Islamophobic rhetoric of the Trump administration has resulted in an environment of heightened anti-Muslim hate, and Chauhan also makes note of the fact that many Indian-Americans — or "Desis" — are often targeted due to the color of their skin:

Desis. We must speak up. We must engage civically. We must work to dismantle white supremacy. ✊🏾✊🏾✊🏾 https://t.co/zdFIAQIa3g

This is one example of what everyday resistance looks like: Treating ascendant authoritarianism and its representatives with the polite respect normalizes the abnormal.

Chauhan is using her right to speak truth to power while she still has the right to do so. The challenge is for the majority of other Americans to do the same.

In Chauhan's own words:

I hope my action allows others to gain the courage to take their own. If someone is already resisting, I hope it will give them energy to resist harder. If someone has not resisted, I hope it inspires them to get involved. We will only win if we resist together for liberty, justice and equality. This is our shared America.