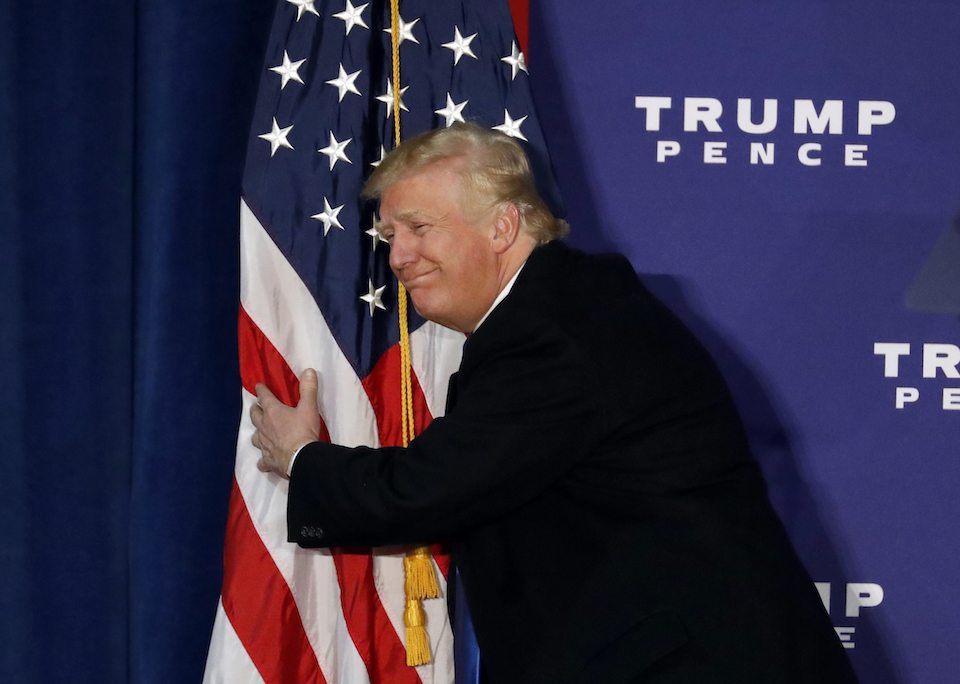 In case it wasn't obvious that Trump's outrage about supposedly disrespecting the flag is utterly ingenuous, this should settle it.

On Tuesday morning, Donald Trump took to Twitter to attack the NFL — again — for supposedly disrespecting the American flag.

Mere hours later, he retweeted a bizarre image of himself standing in front of a burning American flag, something Trump has said should be a crime, the penalty for which would be "perhaps loss of citizenship or year in jail!"

One wonders, then, what punishment he would deem fit for creating or promoting "art" of burning American flags. Trump's "feud" with NFL players silently protesting police brutality has been both ridiculous and deeply offensive from the start. He, his spokespeople, his defenders, and his vice president have gone to great lengths to dismiss the real reason for the protests to instead distort it into an attack on the American flag, the national anthem, and our veterans.

This is certainly not something actual veterans believe. Michael Hayden, a four-star general who served in the military for 39 years and went on to serve as national security adviser and head the CIA, recently penned a blistering response to Trump's fake outrage.

"I think I know something about the flag, the anthem, patriotism, and I think I know why we fight," he wrote. “It’s not to allow the president to divide us by wrapping himself in the national banner."

That didn't stop Trump and his administration from continuing to wage this war on NFL athletes protesting police brutality while pretending it's about respect for the flag.

This weekend, the White House went so far as to spend $242,000 of taxpayer money to send Mike Pence to a Colts game for the explicit purpose of immediately walking out in "protest" of this supposed disrespect. The Trump re-election campaign then turned that stunt into a fundraiser and has provoked serious ethical questions about why taxpayers should foot the bill for a transparent political stunt.

Trump's apparent endorsement of this odd Trump iconography — after all, he has never retweeted anything that wasn't flattering to him — should put an end to this phony debate about who most respects the flag once and for all.