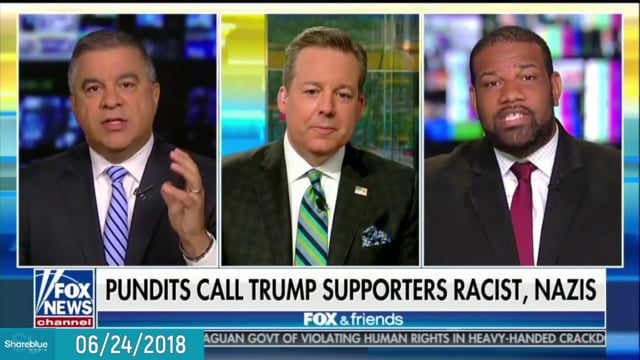 Fox anchor Ed Henry was forced to apologize for what Trump deputy campaign manager David Bossie said to a guest.

Former Trump deputy campaign manager David Bossie showed his true racist colors when he said something so offensive that anchor Ed Henry was forced to apologize.

On Sunday morning's edition of "Fox & Friends," Henry was moderating a discussion on Trump's child prison camps, between Bossie and Democratic strategist Joel Payne, when things took a turn.

Bossie was very upset about the fact that the camps where Trump has concentrated the children he's ripped away from parents have drawn comparisons to concentration camps.

In response to Bossie's attempt to paint Trump critics as "hate-filled," Payne — who is African American — said “You don’t have to be a golden retriever to hear all the dog whistles coming out of the White House these days, and from my friend David here.”

“You are out of your cotton-picking mind!” Bossie exclaimed.

"Cotton-picking mind?" Payne said, incredulously. "Let me tell you something. I've got some relatives who picked cotton. And I'm not going to allow you to attack me like that on TV. I'm not out of my cotton-picking mind. You better watch your mouth!"

They also come not long after Trump himself hosted an event devoted entirely to demonizing immigrants as criminals, and just hours after Fox News contributor Mike Huckabee — father of Trump spokesperson Sarah Huckabee Sanders — posted a racist attack on Democrats to his Twitter account.

"Nancy Pelosi introduces her campaign committee for the take back of the House," Huckabee tweeted, along with a photo of gang members that appears to have been lifted from white supremacist Richard Spencer's website. Both the chairman and the executive director of the Democratic Congressional Campaign Committee (DCCC) are latino.

Republicans have been surprisingly transparent about the fact that racism is the only mobilizing strategy they have left, but when you're too racist even for Fox News, it might be time to rethink.