Home National Trump ramped up his fawning over Putin just as he was trying...
Support progressive journalism.
Donate today 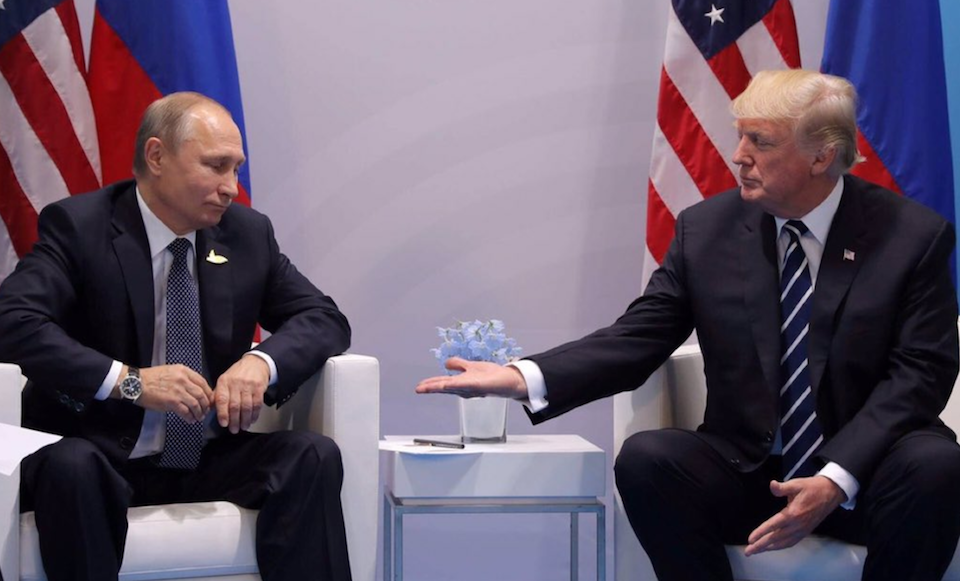 Donald Trump started heaping praise on Putin during the presidential campaign just as his business was trying to get a Russia to give him a real estate deal. That's probably not a coincidence.

Donald Trump used his presidential campaign to promote and flatter Vladimir Putin — even defending his murdering of journalists — while his cronies were reaching out to Russia in hopes of making a major real estate deal worth millions to Trump's bottom line.

That's according to newly disclosed emails that show Trump's closest associates working to get Trump the Trump Tower in Moscow that he had long craved.

In 2013, Trump tweeted about building a Trump Tower in Russia, writing, "TRUMP TOWER-MOSCOW is next."

The New York Times reports that Felix Sater, a business associate of Trump, contacted Michael Cohen, Trump's personal lawyer, to discuss building a Trump tower in Moscow and getting Putin to help.

"Our boy can become president of the USA and we can engineer it," Sater told Cohen, adding, "I will get all of Putin's team to buy in on this." Sater indicated that he had lined up financing for the building in a deal with the Russian VTB Bank, and talked about a ribbon-cutting ceremony in Moscow.

Sater was a partner in Trump's SoHo project and while in Russia identified himself as senior adviser for the Trump Organization. A Russian immigrant, Sater previously served a year in prison for stabbing a man and was convicted of a $40 million stock manipulation and laundering scheme.

The email exchange between Cohen and Sater occurred on Nov. 3, 2015.

Within days, Trump was on the presidential campaign trail sounding like a hype man for Putin.

During the Republican presidential debate on Nov. 10, Trump deflected a question about Russian aggression, citing Putin's decision to invade Ukraine and put troops into Syria.

"It's not only Russia," he insisted defensively, and shifted focus to include behavior from North Korea, Iran, and China.

He then told the moderator, "I got to know [Putin] very well because we were both on 60 Minutes, we were stablemates, and we did very well that night." Trump turned concerns about Russia's occupation of Ukraine into complaints about NATO allies supposedly not keeping up their end of the bargain.

The praise for Putin did not stop there. A few weeks later, on "Morning Joe," Trump said compared Putin to President Barack Obama, saying, "He’s a leader, unlike what we have in this country."

When host Joe Scarborough brought up the claim that Putin "kills journalists that don’t agree with him," Trump was dismissive.

"I think our country does plenty of killing also, Joe," he said.

The comments and praise sound like someone who knew that behind the scenes, he was on the verge of a major real estate deal, and knew that in Putin's Russia, where oligarchs have made billions in proportion to their closeness to Putin, being friendly toward him could go a long way.

Trump had long sought business deals in Russia, but his presidential campaign gave him the kind of media platform he had never had access to before. His company did not have major investments in Russia, but his new political prominence gave him a greater opportunity than he'd ever had before to change that.

Two days after the MSNBC interview, Trump again defended Putin, telling ABC, "In all fairness to Putin, you're saying he killed people. I haven't' seen that. I don't know that he has. Have you been able to prove that?"

"I have been working with a company based in Russia regarding the development of a Trump Tower — Moscow project in Moscow City," Cohen wrote. He requested Peskov's assistance in securing meetings with officials to move the project forward.

Cohen could then have easily pointed to any number of Trump's public statements to make the case that their bosses could work together, eventually paying off handsomely for Trump.

But Trump was elected to the presidency, and despite his insistence that he did not collude with Russia, both the public and private evidence show that several serious contacts were made while Trump was busy flattering Putin and defending his most egregious offenses.

Putin could not have been a stronger advocate for himself than Donald Trump was, even as he was campaigning to be the president of the United States.

Now, Trump is under investigation on multiple fronts, including the probe by special counsel Robert Mueller. He has tried to pressure the both the FBI and Congress to look the other way and obstruct justice, but instead a pattern of behavior and deceit has emerged.

The timeline shows a motivation for his praise of Putin, and how he stood to make huge financial gains at the other end of the campaign.