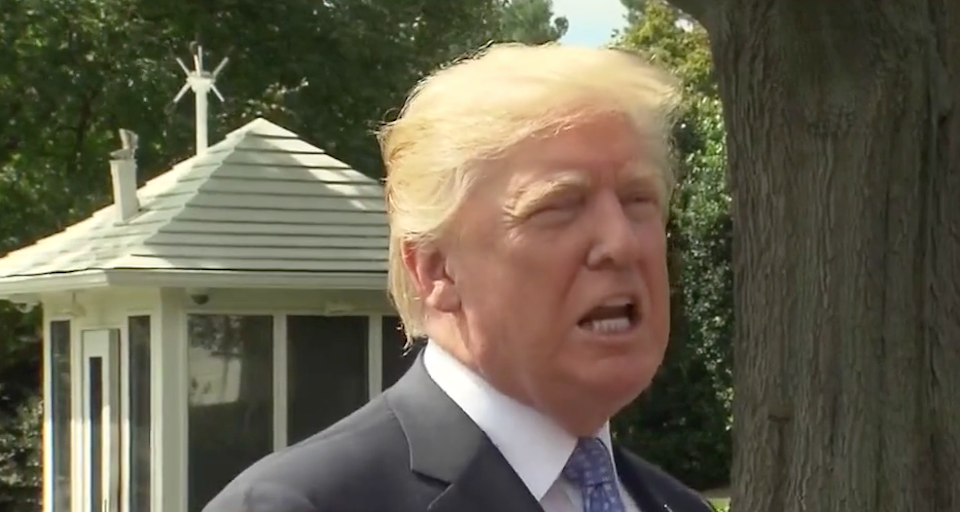 Trump refuses to waive an obscure, century-old maritime law in order to help hurricane victims because, in his words, the "shipping industry" would not be happy.

The devastation in Puerto Rico in the aftermath of Hurricane Maria is one of the worst natural disasters this year. The storm flooded and completely destroyed towns, leaving 3 million Americans without power or cell service for days, and over 1 million without water. Even the hospitals are struggling to keep their lights on.

But Donald Trump has offered them very little in the way of help or even sympathy.

In fact, he is refusing to do everything in his power to help out of concern for "the shipping industry."

When pressed by reporters for an explanation of why he has refused to waive the Merchant Marine Act of 1920, popularly known as the Jones Act, which is making it impossible for several ships to deliver supplies to the island, Trump gave the most stunningly insensitive answer imaginable.

"Well, we're thinking about that," Trump said, "but we have a lot of shippers and a lot of people that work in the shipping industry that don't want the Jones Act lifted."

The Jones Act severely restricts the movement of foreign vessels between the mainland and U.S. territories. Since Saturday, 3,000 shipping containers of food, water, and medical supplies have been sitting unused at port in Puerto Rico, brought by foreign ships, and the Jones Act prohibits them from being unloaded.

But Trump’s Department of Homeland Security refused to grant a shipping waiver for these vessels — even though it did issue a waiver after hurricanes Harvey and Irma, to help devastated Americans on the mainland — a situation Sen. John McCain has blasted as “unacceptable.”

Trump's entire response to Hurricane Maria has been unacceptable. One of his first public statements on Puerto Rico was to criticize them for their debt crisis, which is largely the fault of federal tax law and corporate exploitation and has nothing to do with their need for disaster relief. Distracted by his feud with the NFL, he only sent a naval vessel to the island after being guilted into it by Hillary Clinton, and defended himself by saying that the Atlantic is a “very big ocean.”

Quite aside from the insanity of Trump literally saying that shipping industry executives’ profits matter more than the lives of American citizens in a disaster area, his explanation does not even make sense. Even if Trump did not want to repeal the Jones Act, he could still issue a waiver for this specific situation.

For good measure, Trump is also restricting a bipartisan group of lawmakers from traveling to Puerto Rico, all but cutting off the island from anything that that would bring outside help or attention.

Not since Hurricane Katrina has an American natural disaster been handled with less competence or less regard for the lives of fellow citizens. Trump’s comment about “the shipping industry” was shocking only in its brazenness — the fact that he has this little empathy for Americans in Puerto Rico tallies with every known Trumpian instinct. But it is still a stain on our leadership at a time when we need it most.