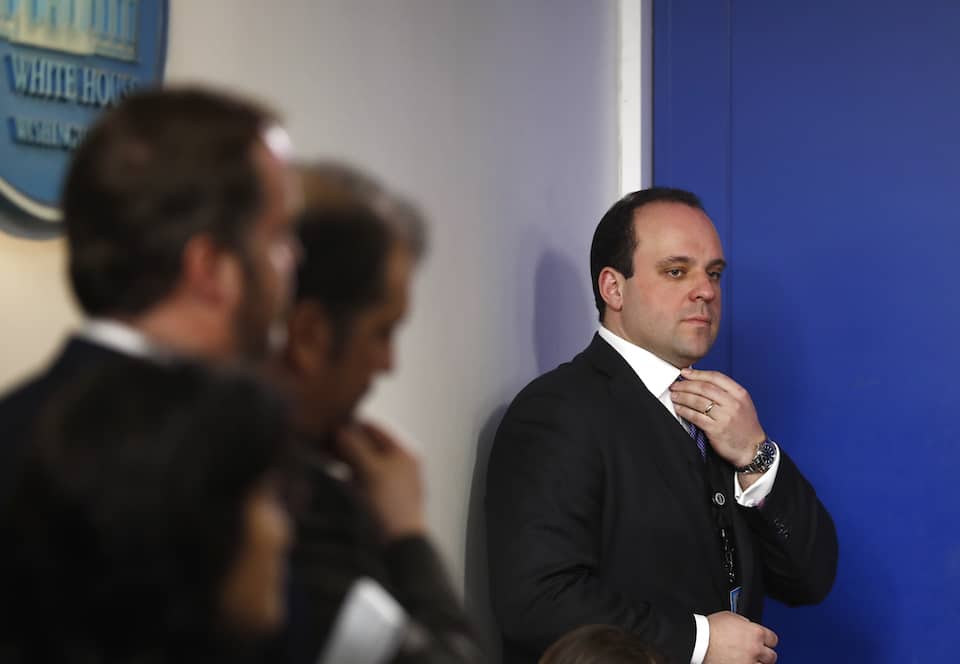 A Trump aide with a Russian background and ties to Russian business is being removed from his position, as multiple investigations into Russian interference in the election heat up.

Boris Epshteyn, a special assistant to the president with ties to Russian business who coordinates media appearances of Trump surrogates to defend the administration, is being pushed out of his position as multiple investigations into the Trump-Russia axis before the 2016 election continue.

The sudden removal of Epshteyn, one of Donald Trump's most vocal advocates for Russia, comes days after FBI Director James Comey confirmed the existence of an ongoing investigation into ties between Russia and the Trump campaign. This latest revelation is in addition to multiple congressional inquiries already underway — with varying levels of Republican cooperation — into the Trump-Russia connection.

Epshteyn was born in Russia, and before joining the Trump presidential campaign, he moderated a 2013 panel in New York City called "Invest in Moscow!" Epshteyn was joined on that panel by several officials from Moscow's city government, including Sergey Cheremin, the minister in charge of international economic relations for Moscow.

Like Russian President Vladimir Putin, Epshteyn has falsely claimed that Russia did not annex the Crimean territory of Ukraine, declaring, during a 2016 appearance on CNN, "There was no seizure by Russia." For months, Trump downplayed the annexation of Crimea, even as the rest of the world had long since condemned the action. The United Nations has officially condemned Russia for its hostile action, and President Obama criticized the action and said Putin had used "dark tactics" to subvert Ukrainian sovereignty.

In addition to his advocacy for Russian business and defense of Russian policies, Epshteyn has been described by multiple sources at all three cable news networks as someone who "terrorizes" other guests and hosts in the green rooms of those networks. He reportedly threatened to pull Trump officials from Fox News after a contentious appearance when anchor Bill Hemmer asked him for details on Trump's Muslim ban.

Basil Smikle, chairman of the New York State Democratic Party, said, "Boris suggested affirmative action means that institutions have to lower their standards to let African-Americans in," during a discussion they had before a media appearance.

Multiple people told Politico that Epshteyn complained about how LGBT rights activist Christine Quinn cut her hair short and wore a pantsuit, whining, "Why does she dress like that?"

MSNBC's Joy-Ann Reid said, "He calls women girls, and he has no decorum about how he speaks to people. He's somebody that just makes the room uncomfortable. When he leaves the room, the conversation is, 'I hope he never comes back.' He enjoys making people uncomfortable."

Despite those complaints and a list of other incidents, Trump was fine with having Epshteyn out front as one of the media faces of his political team. The complaints about his abusive and boorish behavior did not result in a demotion or removal.

But as the FBI and Congress began to publicly acknowledge their investigations into Trump and Russia and the ties that bind them, the White House has now decided to remove Epshteyn, a senior aide with extensive Russian ties and affiliations — a move that hints at Trump's increasing concern about his interests and liabilities as investigators are getting closer to the truth about what actually happened in our election.