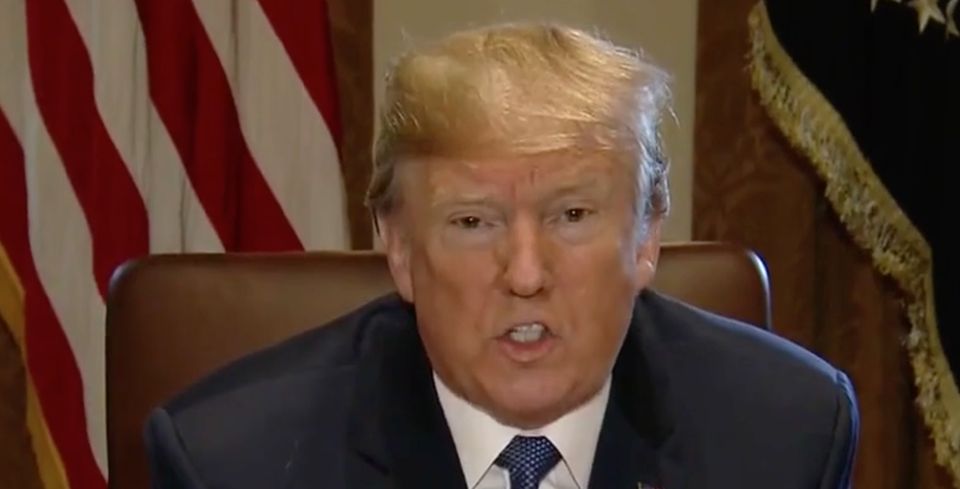 Donald Trump could have called for national unity and purpose after a terrorist attack in New York City. Instead, he did what he always does: attack America.

Donald Trump responded to a terrorist attack in the heart of New York City by issuing a full-frontal attack on the United States of America.

Rather than following in the model of previous presidents and world leaders who pushed for unity and solidarity when faced with tragedies, Trump continued his months-long drive to diminish the presidency, and by extension the United States, with his craven remarks.

Speaking to cameras while using handwritten notes for what he knew would be remarks broadcast around the globe, Trump spoke as if America itself had attacked innocent civilians on Halloween night.

Trump complained that America's criminal justice system "is a joke and it’s a laughingstock and no wonder so much of this stuff takes place."

That same criminal justice system has dealt with terrorists, who are incarcerated at some of the most secure facilities in the world.

Dismissing the long-held and admired American tradition of a fair and impartial trial, resulting in a verdict with the full weight of the public behind it, Trump angrily insisted that America has "to come up with punishment that's far quicker and far greater than the punishment these animals are getting right now."

He added, "We need quick justice, and we need strong justice. Much quicker and much stronger than we have right now."

He sounded more like the thuggish Rodrigo Duterte, the Phillipine strongman who has thrown out the rule of law and turned his nation into a slaughterhouse and international pariah. It is no coincidence that Trump has praised Duterte – they sound the same, just with different accents.

TRUMP: We also have to come up with punishment that's far quicker and far greater than the punishment these animals are getting right now. They'll go through court for years, at the end they'll be — who knows what happens? We need quick justice, and we need strong justice. Much quicker and much stronger than we have right now. Because what we have right now is a joke, and it's a laughingstock. And no wonder so much of this stuff takes place. And I think I can speak for plenty of other countries too that are in the same situation.

The bitter vitriol stood in stark contrast to his predecessors in the office.

After a crazed gunman attacked black churchgoers in South Carolina, President Barack Obama said, "I am confident that the outpouring of unity and strength and fellowship and love across Charleston today, from all races, from all faiths, from all places of worship, indicates the degree to which those old vestiges of hatred can be overcome."

George W. Bush, addressing the 9/11 terror attack, told America, "These acts of mass murder were intended to frighten our nation into chaos and retreat. But they have failed. Our country is strong. A great people has been moved to defend a great nation."

Bush also said, on that infamous day, "Terrorist attacks can shake the foundations of our biggest buildings, but they cannot touch the foundation of America."

Less than 24 hours after a terrorist attack, Trump himself is attacking the very foundation of America as a "joke."

Trump's screed even defied international tradition. Just a few months ago, addressing a terror attack in London, Prime Minister Theresa May said, "The whole of our country needs to come together to take on this extremism, and we need to live our lives not in a series of separated, segregated communities, but as one truly United Kingdom."

The reaction also stood out in comparison to his disinterest in legislative solutions and actions after the mass murder in Las Vegas only a month ago.

In that situation he made no call for action, whereas with the New York City attack, Trump blamed Democrats, whining, "We have a lot of good bills in there being stopped by Democrats because they're obstructionists, and honestly, they don't want to do what's right for our country."

Apparently without the NRA pulling on his leash, it is far easier for Trump to make a call to action, except his ire is directed toward all the wrong targets.

Trump's instinct, in all situations, is to be a bully. He has been caught, time and time again, making assertions that put himself on a pedestal above everybody else, looking down on everyone, elevating Donald Trump not only above his political rivals, but above the rule of law itself.

It is the instinct and mindset of an authoritarian dictator, and completely goes against what America stands for.

The reality is Trump's rhetoric is low, below the dignity of the office, and not deserving of respect from his fellow citizens or the global community. What he spouts is un-American to its core.