Home National Trump ripped this woman away from her family, now her kids will...
Support progressive journalism.
Donate today 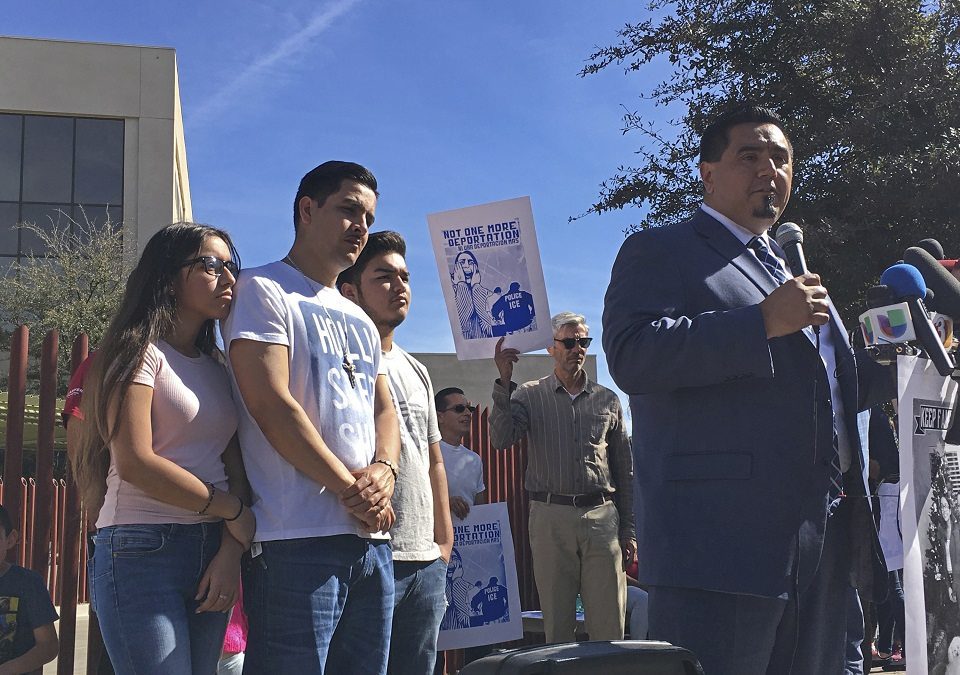 (AP Photo/Astrid Galvan)
Get The American Independent in your inbox

Family members of one of the victims of Donald Trump’s immigration policies will be in attendance at his address to the nation this week, thanks to two Democratic congressmen.

Angel and Jaqueline Garcia de Rayos, the teenage children of Guadalupe Garcia de Rayos, will be the guests of Reps. Ruben Gallego (D-AZ) and Raul Grijalva (D-AZ) on February 28 as Donald Trump makes his address to Congress.

Guadalupe Garcia de Rayos was detained and deported earlier in February after making an immigration check-in in Phoenix, as she had done seven times before. She has been an undocumented immigrant for almost two decades after coming to America as a teenager, where she later married and had two children.

Due to Trump’s xenophobic new policies, the de Rayos family has been torn apart. Even though the mother of two posed no threat to the public at large, she was put in an Immigration and Customs Enforcement van, not allowed to see her children, and taken to Nogales, Mexico. The New York Times documented the aftermath of the callous action and how her daughter felt:

By sunrise, she was back home, packing her mother’s suitcase — her toothpaste, her brush, her favorite pants and shirts.

"Nobody should have to pack her mother’s bag," she said, her lips quivering, tears filling her eyes. "It isn’t fair."

The treatment the de Rayos family has faced is a marked change from the immigration regime under President Obama, who advocated for comprehensive immigration reform — which was stymied by hard-line Republicans in Congress, even though there were enough votes in both parties to pass legislation.

Now, under Trump, Republicans have completely turned against reform, instead prioritizing an agenda to demonize and deport.

Police departments around the country, following the leads of several cities with large immigrant populations, have begun pushing back on anti-immigrant mandates coming from the Trump administration. In turn, some of those cities and departments have faced retaliation from anti-immigrant Republican governors like Texas' Greg Abbott, who has threatened to withhold funds until they bend to Trump's will.

In a statement, Grijalva emphasized the injustice of Trump using a hardworking family as cannon fodder for his ongoing campaign against immigration, one of the bedrock principles of the American ideal.

Two weeks ago, our nation was appalled to see the Trump administration target Jaqueline’s mom, Guadalupe – a wife, breadwinner, mother of two and long-time member of the Phoenix community – with deportation while she met voluntarily with ICE officials. Jaqueline and her brother have shown tremendous courage in speaking out against Trump’s abhorrent immigration policies, which recent DHS memos have made clear are nothing short of mass deportation. Their example is a bright light of hope for immigrant communities across this country who are fearful that Trump will come for them next. Their fight is all of our fight, and I am proud to stand side-by-side with them in opposition to these atrocious policies.

Additionally, Gallego noted, "Congressman Grijalva and I invited Angel and his sister Jaqueline to the address because we believe it is important for Donald Trump to face the people who have been victimized by his disastrous policies. As a result of Trump’s immigration enforcement efforts, Phoenix lost a long-time member of the community and two young Americans lost their mother."

He went on to explain that the de Rayos case is now the norm under Trump.

Unfortunately, the Garcia de Rayos family’s experience is not unique. In the first month of Trump’s presidency, we have seen a wave of raids and arrests that have torn many immigrant families apart. These actions have also caused deep fear and uncertainty in communities across the country. Jaqueline and Angel have courageously spoken out against President Trump’s actions and we look forward to helping elevate their story. By standing alongside Angel and Jaqueline we hope to show immigrants everywhere that they are not alone and that we are prepared to challenge this administration in order to preserve America’s fundamental values and freedoms.

Trump and fellow Republicans have campaigned on the backs of undocumented immigrants, dismissing them as criminals and rapists, despite the reality is that the overwhelming majority are families who work hard and pay taxes, and stay out of trouble. Literally dismantling these families to score political points is what the party of so-called "family values" has come to, and tomorrow they will confront the human reality of that decision face to face.