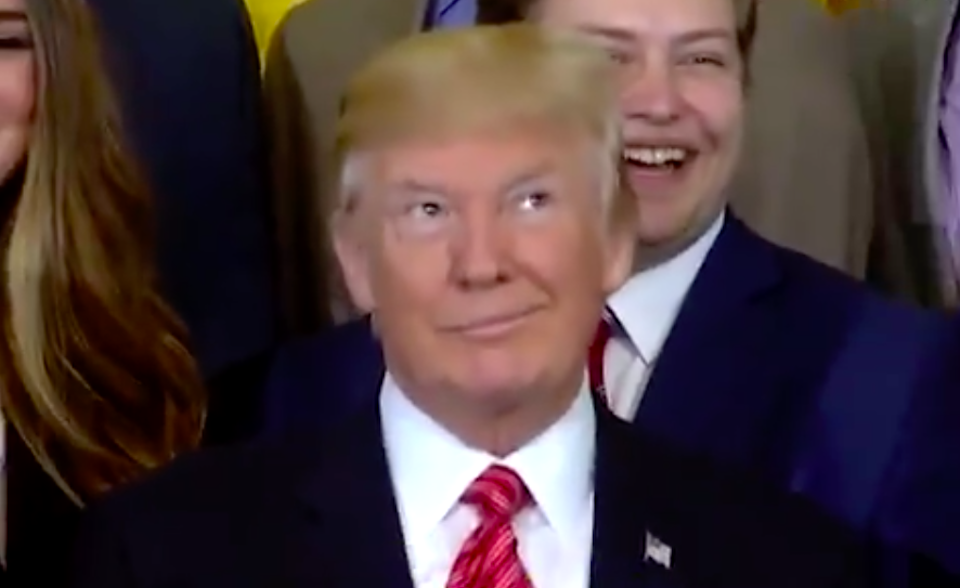 After over 150 days without a presidential press conference, a female reporter tried to get some answers during Donald Trump's photo op with White House interns. What she got in return was an eyeroll, a condescending admonishment, and laughter from the crowd.

Donald Trump's hostility to the press and disinterest in the duties of the presidency has led to drought of over 150 days since his last official presidential press conference.

So journalists have to use whatever opportunities come their way to attempt to get answers on crucial issues facing the country.

But Trump being Trump, he continues to deflect their questions, and to be as condescending as he can in the process.

During a photo-op with outgoing White House interns, a female reporter can be heard off-camera, asking, "Mr. President, should Jeff Sessions resign?"

Trump responded solely with an obvious roll of his eyes, which garnered gleeful laughter from the crowd around him.

And when the reporter continued, asking about the Republicans' health care repeal bill, Trump looked toward her, raised his chin, and tersely stated, "Quiet" — again to the delight of his audience.

The irony of someone like Trump, who has zero measurable respect for the norms and customs — or perhaps, the "codes" — of the presidency whining about someone else violating one is hard to miss.

A reporter was simply trying, in whatever way she can under this administration, to do her job and get answers for the public. Instead, she got a snide dismissal and derisive laughter.