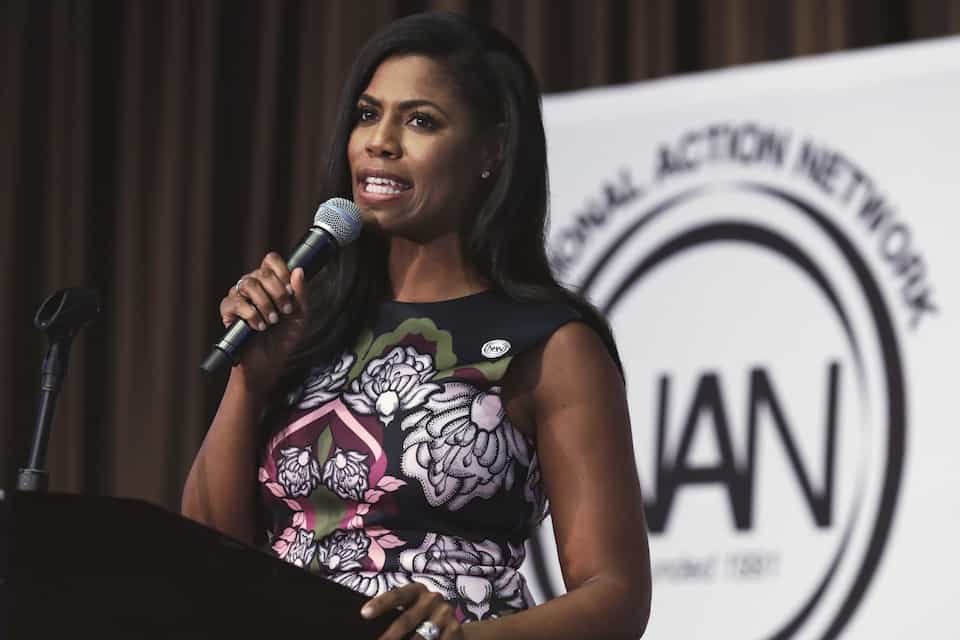 Donald Trump sent administration official and former reality TV star Omarosa Manigault to the National Action Network's annual meeting to sell the civil rights organization on the Trump agenda. Instead, the audience rejected her hostile message, while other speakers lambasted her and Trump's failed record on race.

Omarosa Manigault, former reality television personality and current Trump administration official — ranked by TV Guide as one of the "60 nastiest villains of all time" — was dispatched by the White House to the  National Action Network's annual conference to sell attendees on Donald Trump.

Manigault is the White House director of communications for the Office of Public Liaison, but the members of the civil rights group, which is led by Rev. Al Sharpton, were not in the mood for a sales job from an administration that has so blatantly embraced racism and bigotry.

Manigault said she was at the event to give an "update on the last 100 days of what I have been doing," but Politico reported that she received a "tepid response" from the audience. She asked for the group to help Trump on issues like microlending and clean water for the city of Flint, Michigan — overtures that were met with silence, according to Politico.

Members of the audience groaned when she told them she wished to partner with National Action Network on behalf of "the president of the United States." In response, Manigault said, "I know who cashes my checks."

Sharpton spoke after Manigault and told her that the message the audience wanted her to take back to Trump was, "We as blacks and women are, in the first 100 days, seeing a disaster in Washington, D.C."

She left after Sharpton delivered his remarks, but a later speech from CNN commentator and IMPACT strategies CEO Angela Rye directly rebuked Manigault and Trump.

“Moments ago, we were joined by your president’s apprentice,” she began. “And I have a burden to tell the truth.”

“The truth is Pell grants were cut under this administration. The truth is you don’t put forth a tax reform plan that cuts corporate tax rates but ignores the poor … ensuring that burden is going to be on the backs of ordinary black and brown people. You don’t fight for people by trivializing the first black president by questioning his legitimacy.”

Rye went on to recount Trump's long history of racial antagonism, including calling for the death penalty of the Central Park Five long after they had been exonerated, as well as his work with his father when the Trump Organization discriminated against blacks who applied for apartments.