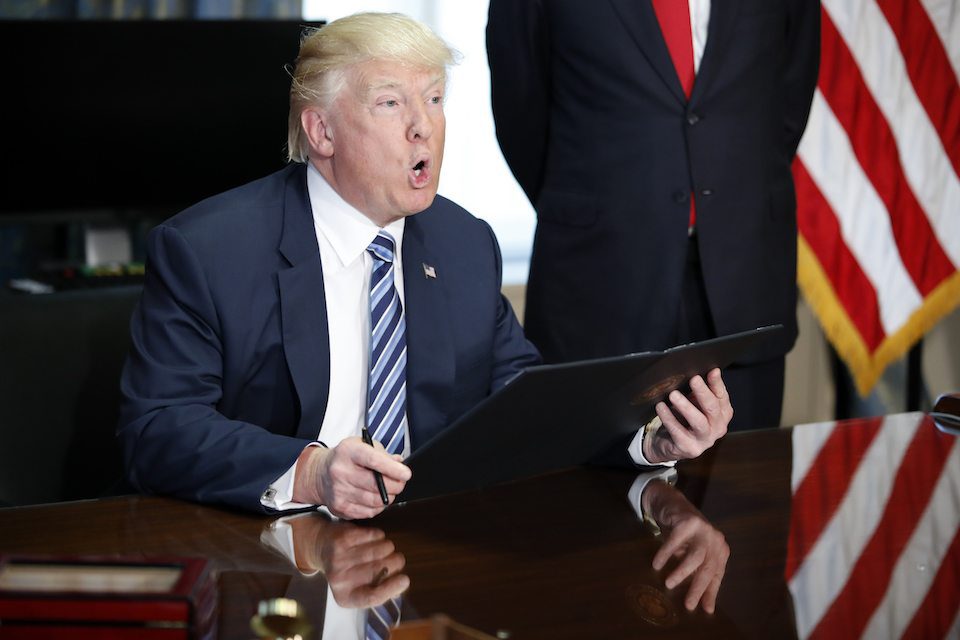 In one day, Trump once again blamed "both sides," signed a resolution condemning the Charlottesville rioters, then issued a separate statement on it that did not mention Nazis or white supremacy.

Donald Trump has handled the aftermath of the deadly neo-Nazi riots in Charlottesville appallingly from day one. His repeated equating of Nazis with anti-Nazi counterprotestors and claiming there were "fine people on both sides" has drawn sharp rebuke from both parties, the United Nations, and Germany.

But this week marked quite possibly Trump's most farcical, offensive, and incoherent attempt yet to address the affair.

On Wednesday, Trump met with Sen. Tim Scott of South Carolina, the only black Republican in the Senate, to discuss racial issues. Press secretary Sarah Huckabee Sanders claimed Scott did not criticize Trump for his remarks on Charlottesville, but in fact this was a flat-out lie.

Despite Scott giving Trump a "pointed history lesson on America’s ‘300-year’ legacy of racism," per The New York Times, Trump came away from the meeting declaring his condemnation of "both sides" was vindicated, insisting that people had written "Gee, Trump might have a point," and that some of the people opposing the neo-Nazis were indeed "bad dudes."

Scott blasted Trump again for his newest comments, saying "there is no realistic comparison" between the rioting racists and the protesters who oppose them.

On Thursday evening, Trump only made matters more confused.

Faced with controversy and public shaming, Trump signed Senate Joint Resolution 49, which "condemns the violence and domestic terrorist attack that took place during events between August 11 and August 12, 2017, in Charlottesville, Virginia."

The resolution also explicitly rejects "White nationalists, White supremacists, the Ku Klux Klan, neo-Nazis, and other hate groups, and urg[es] the President and the President’s Cabinet to use all available resources to address the threats posed by those groups."

However, Trump then proceeded to issue a press release to mark the signing, which made no mention of white supremacy or neo-Nazism:

Today, I am pleased to sign S.J. Res. 49. As Americans, we condemn the recent violence in Charlottesville and oppose hatred, bigotry, and racism in all forms. No matter the color of our skin or our ethnic heritage, we all salute the same great flag, and we are all made by the same almighty God. We are a Nation founded on the truth that all of us are created equal. As one people, let us move forward to rediscover the bonds of love and loyalty that bring us together as a nation.

If Trump still cannot bring himself to directly criticize neo-Nazism, there was no point to him signing the resolution. And if he can't practice the unity and love that he claims to want, he has no business in the Oval Office at all.