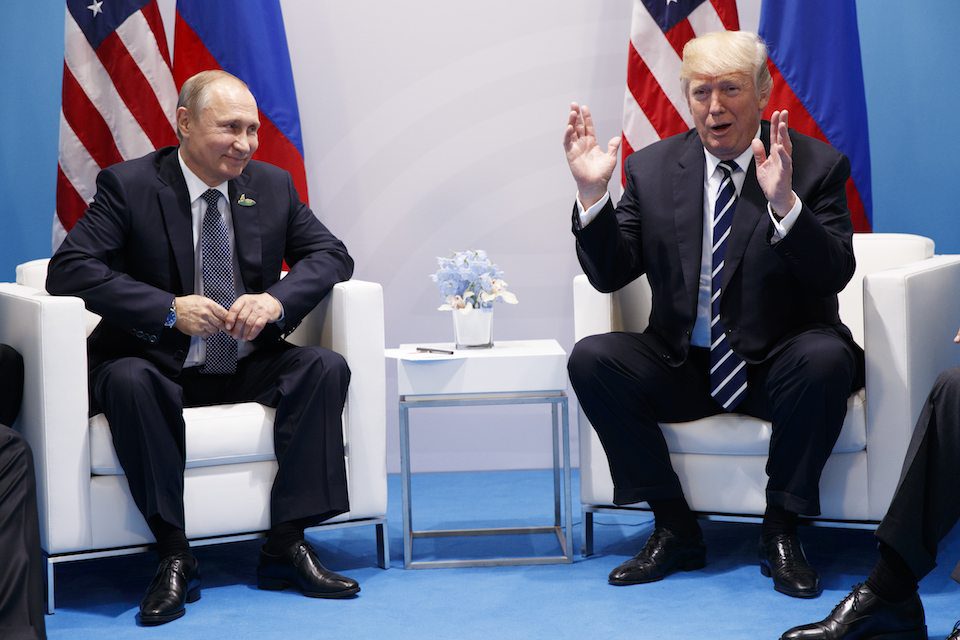 In what one reporter labels as a "bizarre situation," Donald Trump allowed Vladimir Putin to get the last public word about what was discussed during their meeting, including claiming that Trump "agreed" with Putin that Russia did not interfere in our election.

Donald Trump had already humiliated himself before his meeting with Russian President Vladimir Putin.

And he is continuing to do so in the aftermath, allowing Putin's troubling and defiantly definitive statements about what went on during the meeting to be the last word on the subject, at this point in time.

Speaking to the press, Putin claimed that Trump "agreed with" him when he insisted that Russia did not interfere in our election.

Meanwhile, Trump and his wife were making their goodbyes and boarding a plane out of Hamburg, Germany, with no final press conference from Trump — as is the custom for world leaders following the G20 summit — and, at this time, no word from the White House in response to Putin's statements.

As CNN White House correspondent Sara Murray noted, it was a "bizarre situation."

WHITFIELD: U.S. Secretary of State Rex Tillerson had said that the president confronted Putin about interference in the U.S. election, but Putin says he and Trump are in agreement that Russia was not involved.

REPORTER (through interpreter): Did Trump agree with your position that Russia had not intervened in the U.S. elections?

PUTIN (through interpreter): Well, he — let me repeat — he answered all the questions, and I think that he noted it and he agreed with it. But I think it's better to ask him exactly what you have asked, rather than me.

WHITFIELD: All right, but unlike Putin and other world leaders at the G20, we did not hear from President Trump directly, assessing his trip. In fact, just moments ago, we see him, along with First Lady Melania, in their departure from Hamburg, as they are soon to walk up those steps and get right back into Air Force One. So, let's go now to CNN White House Correspondent Sara Murray, who remains there, live from Hamburg. So Sara, so the president is leaving Hamburg, allowing Putin to get the last word on what the two talked about and agreed upon?

MURRAY: That's right. It is sort of a bizarre situation. We haven't seen any Trump administration officials on camera today responding to comments from Putin. As you mentioned, the president is scheduled to leave, he's already there at the airport at his plane, without holding a press conference, which is customary for other world leaders to do at the end of the summit.

Yet again, Trump proves that he is willing to buckle under to Putin's manipulation, and to allow Putin to essentially run the very ominous show being played out between the two men in front of the entire world.

Trump is putting country over party. Unfortunately, it's the wrong country he is elevating.