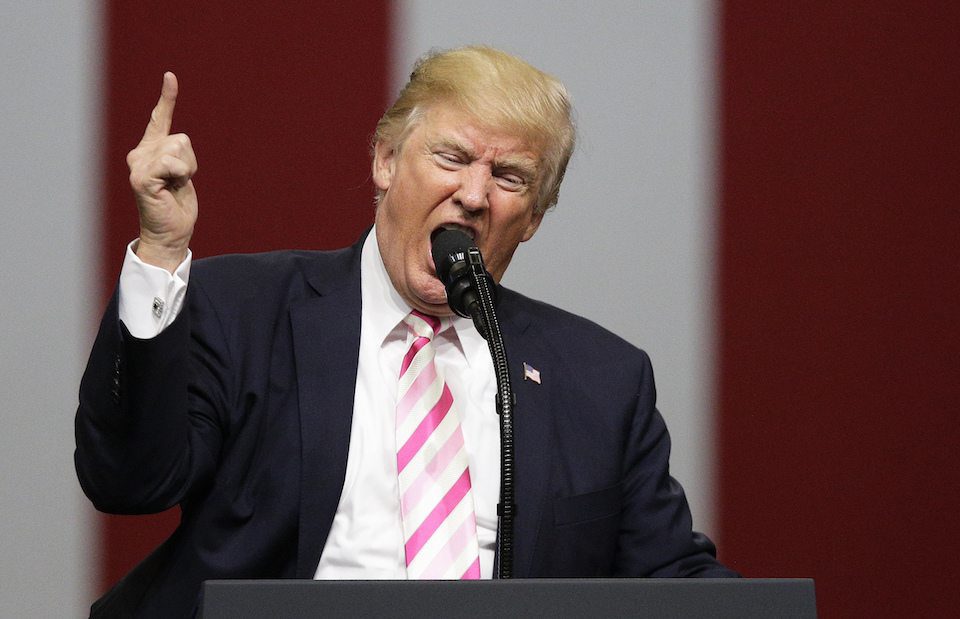 In Donald Trump's mind, black celebrities who speak out are "sons of bitches" while white men who march with Nazis are "very fine people."

Donald Trump is incensed that black athletes would dare to speak their minds.

At an unhinged rally in Alabama, Trump harshly attacked black NFL players who have exercised their First Amendment right to speak their minds by taking a knee during the national anthem.

"Wouldn’t you love to see one of these NFL owners, when somebody disrespects our flag," Trump ranted, "to say, ‘Get that son of a bitch off the field right now, out. He’s fired. He’s fired!'"

The players in question are following the lead of former NFL star Colin Kaepernick,  who began taking a knee during the national anthem last year to bring more attention to issues of racial injustice in America.

While Kaepernick is not playing in the NFL this season, an increasing number of players are kneeling to highlight issues such as systemic racism, police brutality, and the need for criminal justice reform.

Yet Trump ignored the actual reasons for their protest, and decided to curse about these black athletes in front of a largely white audience.

In response to our nation's highest elected official calling her son a "son of a bitch," Kaepernick's mom responded in brilliant fashion on Twitter:

Guess that makes me a proud bitch!

Even the NFL came out with statement condemning Trump's remarks, saying, "Divisive comments like these demonstrate an unfortunate lack of respect for the NFL, our great game, and all our players."

Going to the White House is considered a great honor for a championship team.Stephen Curry is hesitating,therefore invitation is withdrawn!

Curry, part of the NBA champion Golden State Warriors, had the audacity to dare speak out against Trump in a recent interview. While championship teams routinely go to the White House for a photo-op, Curry voiced clear opposition to the visit:

That we don’t stand for basically what our President has – the things that he’s said and the things that he hasn’t said in the right times, that we won’t stand for it. And by acting and not going, hopefully that will inspire some change when it comes to what we tolerate in this country and what is accepted and what we turn a blind eye to. It’s not just the act of not going there. There are things you have to do on the back end to actually push that message into motion.

Shortly after Curry's comments aired on Fox & Friends, Trump tweeted out that Curry's invitation to the White House was withdrawn.

These incidents come on the heels of the White House calling for the firing of yet another prominent black role model: Jemele Hill.

Hill spoke her mind on Twitter, accurately noting that Trump is a white supremacist. In response, the tax-payer funded White House press secretary, Sarah Huckabee Sanders, repeatedly called for Hill to be fired.

In contrast, when a white beauty contestant called Trump out over his hateful remarks about the white supremacist riot in Charlottesville, Virginia, the White House refrained from attacking her.

In the span of less than two weeks, the White House attacked a black ESPN anchor, black NFL players, and a black NBA star.

Trump used harsher language condemning black athletes calling for racial justice than he did describing Nazis marching through the streets.

Apparently, Nazis and white supremacists deserve the benefit of the doubt — but no one else does. Black people who dare to criticize Trump receive a far different response: calls for their firing, shunning from the White House, or being called a "son of a bitch" by a sitting president.

Jemele Hill was right: Donald Trump is a white supremacist. And every day, he seems to be doing his best to make that point painfully obvious.