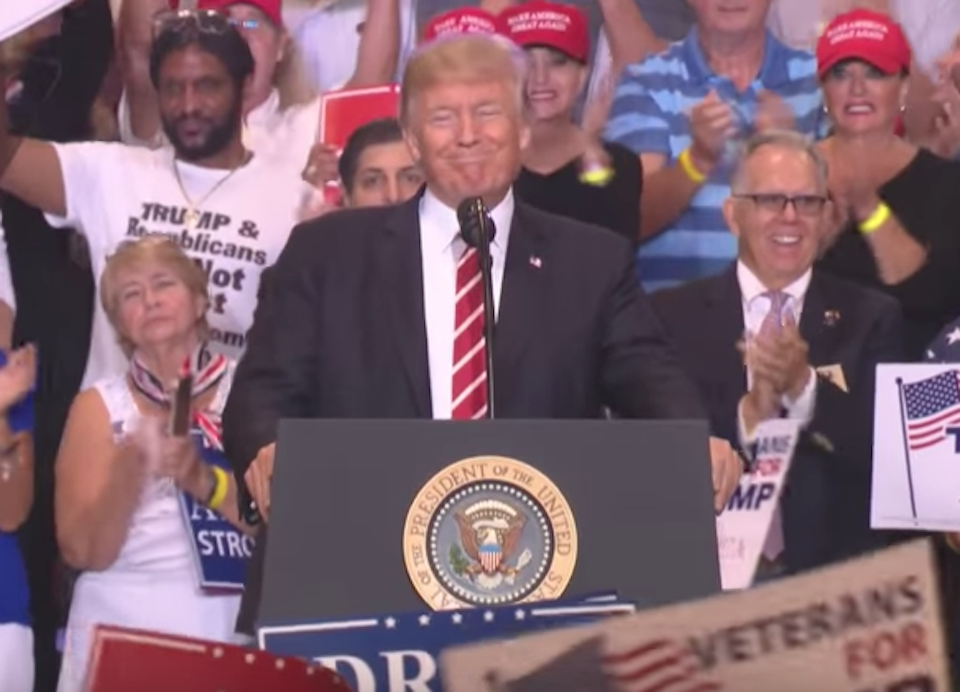 Trump unleashed his narcissism as he wallowed in self-pity at his campaign rally, and failed to honor fallen U.S. military members.

During his televised pity party Tuesday night in Phoenix, where Donald Trump spent huge chunks of time complaining about press coverage, Trump made no mention of the 10 U.S. sailors who remain missing or were killed after the Navy destroyer USS John McCain collided with a merchant vessel off the off the coast of Singapore.

Incredibly, Trump’s public snub came one day after he gave a prime time address about his plans to try to win the 16-year war in Afghanistan. Trump spoke to an audience made up almost entirely of members of the U.S. military. Yet the next night, Trump made no mention of their fallen comrades while basking in the adoration of his hardcore supporters who showed up for the Arizona rally.

Instead, Trump talked about himself. A lot.

A review of the transcript from his rally speech shows he referenced himself nearly 250 times, with the incessant use of “I,” “I’m,” “I’d” and the third-person “Trump.”

Trump's speech revealed a deeply flawed and troubled individual who literally cannot stop talking about himself, even when he’s supposedly addressing the open wounds of white supremacist violence in America, the shocking rise of hate groups, and the death of an innocent protester in Charlottesville, Virginia, Heather Heyer.

In fact, during his rambling address, which ran nearly 80 minutes and stretched out over more than 8,000 words, Trump mentioned “Heather” exactly one time.

Between last week’s collision and a June wreck involving the Navy’s USS Fitzgerald, which collided with container ship in Japanese waters and left seven crew members dead, that’s 17 sailors who have died or are missing this summer. And Trump doesn’t care. At least based on his public actions he doesn’t care.

“It’s beyond infuriating to know there’s a commander in chief who just seems to not really care when our military lose their lives,” Will Fischer, director of government relations for Vote Vets, told Shareblue Media. “It certainly does not signal that he takes into account the lives of troops and their families when he makes any military decisions.”