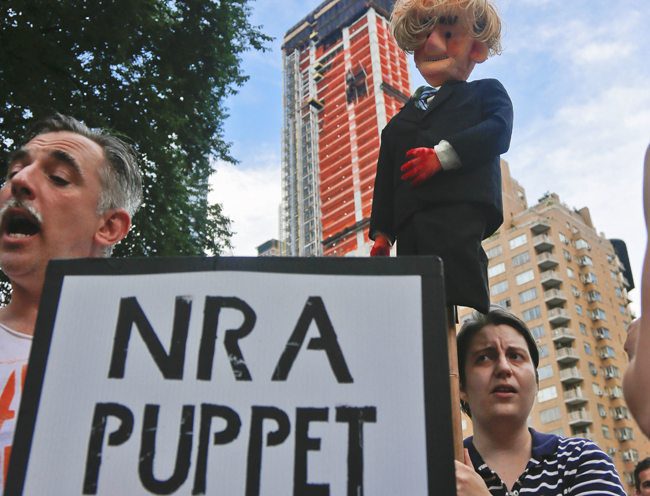 Donald Trump’s strategy to bring "law and order" to urban neighborhoods involves reinstating "stop and frisk," a strategy scrapped by New York City years ago when it was ruled unconstitutional and discriminatory. But his disregard for the Constitution goes beyond the 14th Amendment—he wants to take away citizens’ guns as well. At least if you're Black.

As part of his "outreach" to the Black community, Donald Trump, the self-proclaimed "law and order candidate," has weighed in on what he described as "violence in the Black community." Trump's solution is a return to controversial and ineffective "stop and frisk" policies that were once implemented in New York City.

New York City Mayor Bill de Blasio said Trump obviously "has had no experience with policing, no experience with public safety." Trump doesn’t seem to realize, or simply doesn't care, that the "stop and frisk" policies in his hometown were ruled unconstitutional by a federal court in 2013, because they were found to disproportionately harass Black citizens and violate their rights rather than prevent crime.

Trump's strategy of embracing a policy ruled to be racially discriminatory is hardly the way to woo the Black community. And Trump may not have considered that he’s proposing to trample on the Constitutional rights of another constituency that is very important to his candidacy: gun owners.

Trump: "They will stop, they will frisk, and they will take the gun away and they won't have anything to shoot with." pic.twitter.com/gGx0rJniU7

White gun owners, however, aren't the intended targets of Trump's proposal. And they know they aren't likely to have their guns taken away by law enforcement on the streets of a major city. This is another one of Trump's dog whistles: Pretending to protect Black citizens while effectively stripping away their rights and dignity.

As with "Stand Your Ground" measures, Trump's discredited approach reflects the broader double standard in which gun laws are unequally applied. For Black citizens, Donald Trump's America would be a police state, not the land of the free.