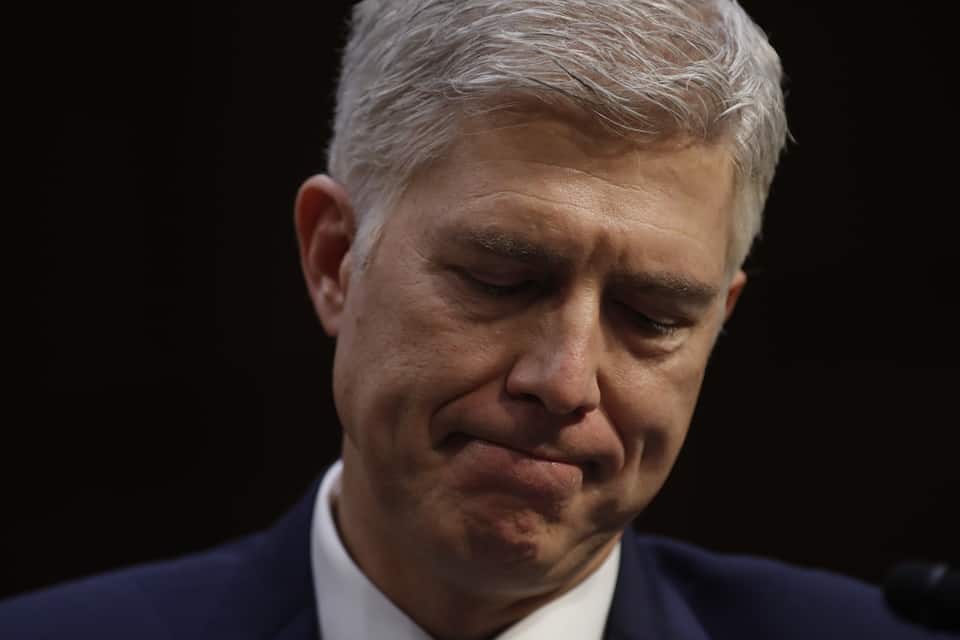 Donald Trump's Supreme Court pick Neil Gorsuch was involved in a college fraternity with a disturbing reputation for sexist behavior and allegations of date rape. Gorsuch resisted efforts to make the frat co-ed, and later in his career made hiring decisions and comments with sexist overtones.

While at Columbia University, Donald Trump's Supreme Court nominee Neil Gorsuch was a member of Phi Gamma Delta (FIJI) between 1986 and 1988.

The Daily Beast reports, "According to school newspaper reports and interviews with former Columbia students, FIJI's reputation was unrivaled among Columbia's 12 other fraternities at the time—defined by accusations of hard-partying, racism, sexism, and date rape."

Student senator David Amanullah wrote in the Columbia Spectator student newspaper in 1989 that "Every female first-year student has heard horror stories about Phi Gamma Delta (FIJI) and Beta Theta Pi members, and is warned of the dangers of getting drunk in either house." Recently, Amanullah told the Daily Beast, "FIJI were known as conservatives in thoughts and ideas, not necessarily in actions or how they ran their house. Sexism, alcohol, and drugs were what FIJI was known for."

In 1987, after a brawl between a Black student and four white fraternity brothers, a protest was held in front of the FIJI house. Tanaquil Jones, head of Concerned Black Students of Columbia, said at the event, "This is the FIJI frat, which has the reputation in the Columbia community of being the date-rape fraternity, among other things."

Brendan Mernin, a member of the fraternity who joined a year before Gorsuch came to school, left after a friend of his was allegedly raped by some of his fraternity brothers. Referring to FIJI's Island Party, Mernin said, "As far as degrading women, that's it. There is always grain alcohol in punch, and bamboo huts (called ‘Smut Huts') there with the expressed idea that you get women drunk and take them in there."

Mernin — who still stands by his comments on the group — said the fraternity's atmosphere of secrecy enabled its sexual assault culture: "Because they're so secretive, it's hard to single out incidents of rape. Women who go to their parties and are raped are made to think ‘It's my fault.' It becomes an individual against 40 guys."

As the university was rocked by these series of controversies, Gorsuch wrote about his opposition to an effort to make fraternities co-ed, describing the campaign as "heavy-handed moralism" and absurd. He also wrote, "We ought to ask if in fact we are anxious to let others decide for individuals what kind of lifestyle is acceptable and unacceptable on this campus."

This attitude still resonates in Gorsuch's words nearly thirty years later, as a former student of his from the University of Colorado Law School said Gorsuch argued that companies should ask prospective female applicants about their plans to have children, alleging that sometimes women use companies for maternal benefits.

And at the confirmation hearing for his SCOTUS nomination, Gorsuch asked his law clerks in attendance to stand up. When they did, it became clear that all of them were men.

A November 1987 editorial in the Columbia Federalist, for which Gorsuch was an editor at the time, stated, "[Students] are coming to the realization that one's actions in college and one's conduct as a young adult will be examined in relentless detail should one chose to enter the public sector."

Based on the conduct of the groups with which he chose to associate himself, his expressed attitudes at the time, and his later behavior and comments as a judge, it is time to hold Gorsuch to the standards he himself laid out.