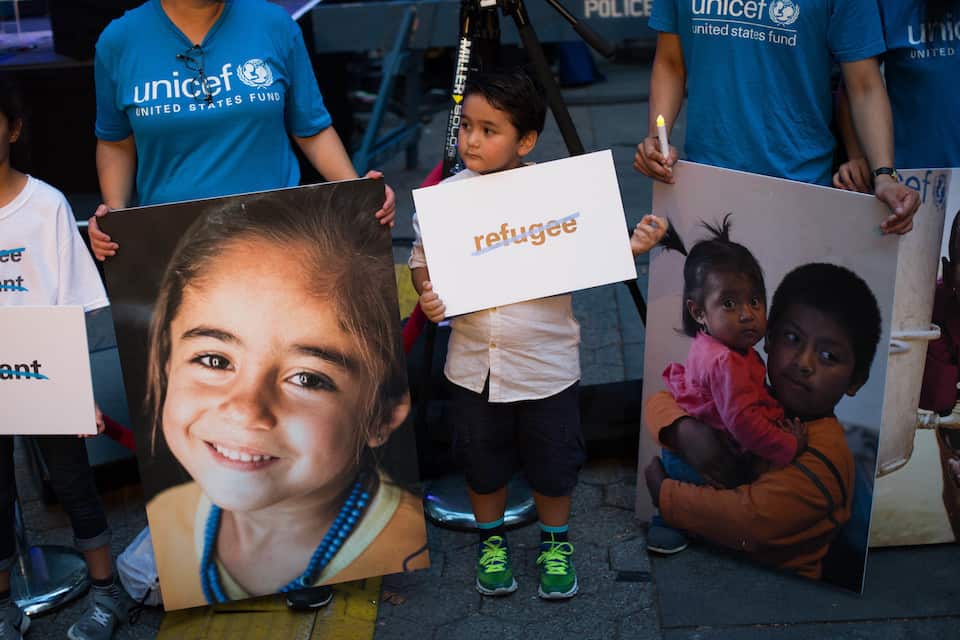 (AP Photo/Kevin Hagen)
Get The American Independent in your inbox

Even Trump administration officials are struggling to justify his budget proposal's harsh cuts to a program that helps child refugees from war-torn countries.

Donald Trump's budget proposal is, by basically any measure, a nightmare.

Meanwhile, it slashes taxes for billionaires, predicting — with no evidence — that this will create $2 trillion in economic growth, and then accidentally double-counts that $2 trillion in its calculations for balancing the budget.

One of the most heartless things about this budget proposal, however, is its treatment of refugee children.

Trump wants to cut $32 billion from the State Department, including $780 million in funding for international programs. This would particularly impact UNICEF, the United Nations organization which focuses on aid for children and mothers in war-torn or developing nations.

UNICEF provides food, clothing, shelter, vaccines, medicine, and educational supplies to millions of displaced children around the world, and when possible, reunites them with their families.

According to UNICEF's estimates, there are 24 million children endangered by conflicts in the Middle East alone, more than a third of them in Syria. As it is, they are unable to help all of these children, and Trump's proposed cuts would further hamstring their mission.

Trump has made his antipathy towards refugees known on previous occasions, having signed multiple executive orders to restrict refugees and ban travel from Muslim countries, some of which were struck down by federal courts. But this new budget proposal would not just keep refugees out of the United States — it would cut funding to help refugee children all over the world.

Even Trump's U.N. Ambassador, Nikki Haley, who recently paid a visit to a UNICEF camp in Jordan, struggled to justify why her boss is trying to cut the program:

It’s starting the conversation. It doesn’t mean that’s where it will end up. He’s going to have that conversation with Congress on where we should fall on this.

Haley has a point — even Republicans in Congress are saying this budget will not pass and they will write their own. But, "what my boss wants will not actually happen" is not a defense of what her boss wants to do.

This budget proposal is meant to be a reflection of Trump's values and priorities as president. It is what he would do if he could wave a magic wand — which makes the devastation it would bring to refugee children all the more horrifying, regardless of whether or not Congress actually lets him do it.

We as a nation are better than this. We cannot allow Trump to weaken America's commitment to the rights and safety of children around the world. It is our moral imperative to reject this budget.