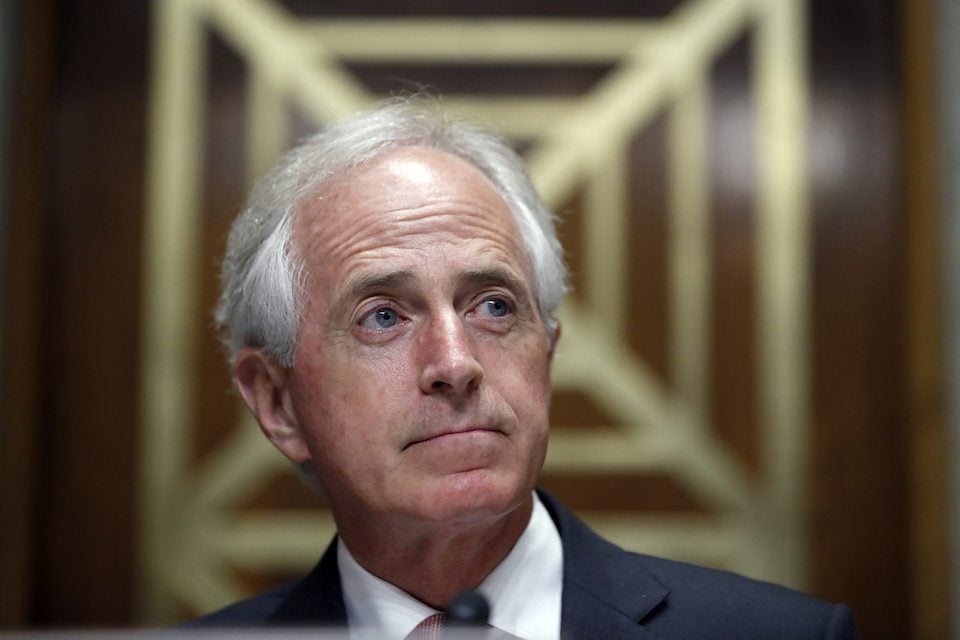 In interviews on Tuesday morning, Tennessee Sen. Bob Corker says Trump has “kneecapped” his chief diplomat and needs to leave national security matters “to the professionals.”

Ever since Republican Tennessee Sen. Bob Corker announced his retirement, he has spoken a bit more honestly about his concerns with the Trump administration’s use of diplomatic and military power.

On Tuesday, Corker appeared on the "Today" show to further discuss his concerns, and made some startling pronouncements about Donald Trump’s fitness to protect America:

Transcript of exchange w/ @SenBobCorker on @TODAYshow, who won't rule out Trump as threat to national security: pic.twitter.com/SCu6z6GugN

When asked directly whether Trump is “a threat to national security,” Corker did not disagree. He simply said that Defense Secretary James Mattis and White House chief of staff John Kelly “work in an effort to contain him.”

While the fact that former generals are unofficially in charge of restraining Trump from pressing the nuclear button is a widely known, unspoken, and unsettling truth, it is still astonishing to hear a member of Trump’s own party say it out loud.

In a separate interview on "Good Morning America," Corker left Trump with a simple, blunt piece of advice:

"I would just like for [Pres. Trump] to leave it to the professionals for a while." - Senator Bob Corker on President and North Korea pic.twitter.com/qQiC2NwjIX

CORKER: When you've got this situation in North Korea, and the president continues to kneecap his diplomatic representative, the secretary of state, and really move him away from successful diplomatic negotiations with China, which is key to this, you're taking us on a path to combat. So I want to support these efforts that are under way. The president undermines our secretary of state, raises tensions in the area by virtue of the tweets that he sends out, and I would just like for him to leave it to the professionals for a while and see if we can do something that's constructive for our country, the region, and the world.

Essentially, Corker is telling Trump to stop believing he has all the answers on his own. He has surrounded himself with a team of national security veterans who, for all their faults, at least have experience in these matters.

As if on cue, Trump immediately responded on Twitter to Corker's criticism.

"Bob Corker, who helped President O give us the bad Iran Deal & couldn't get elected dog catcher in Tennessee, is now fighting Tax Cuts," Trump wrote. "Corker dropped out of the race in Tennesse [sic] when I refused to endorse him, and now is only negative on anything Trump. Look at his record!"

To that, Corker had his own response:

Corker’s warnings come at a time when Trump is taking actions to escalate our country’s preparation for outright war, including an executive order that allows the Air Force to recall retired pilots for active duty.

It is time for our commander in chief to step back from the brink and let more knowledgeable people work on easing international tensions. We cannot allow our country to spiral into a bloody foreign entanglement because of one man’s ego.