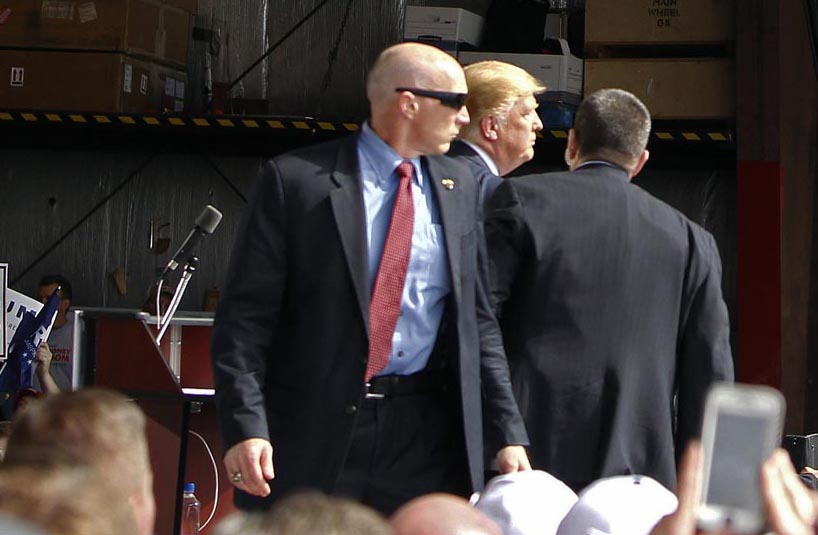 (AP Photo/Kiichiro Sato)
Get The American Independent in your inbox

In another example of President-elect Donald Trump upending longstanding government norms and best practices for his own purposes, he has "continued employing a private security and intelligence team at his victory rallies, and he is expected to keep at least some members of the team after he becomes president," according to a new Politico report. It is a security structure that a former Secret Service agent describes as "playing with fire."

In a new, detailed article at Politico, Kenneth P. Vogel reports that Donald Trump will be keeping some members of his "private security and intelligence team."

"The arrangement represents a major break from tradition," writes Vogel, which is a polite way of saying this is not normal.

But Trump — who puts a premium on loyalty and has demonstrated great interest in having forceful security at his events — has opted to maintain an aggressive and unprecedented private security force, led by Keith Schiller, a retired New York City cop and Navy veteran who started working for Trump in 1999 as a part-time bodyguard, eventually rising to become his head of security.

Security officials warn that employing private security personnel heightens risks for the president-elect and his team, as well as for protesters, dozens of whom have alleged racial profiling, undue force or aggression at the hands of Trump’s security, with at least 10 joining a trio of lawsuits now pending against Trump, his campaign or its security.

By virtue of the fact that "federal law prohibits anyone other than law enforcement officers from bringing firearms into federal buildings," it is unlikely that Schiller could be anything more than a glorified body man for Trump, which raises the question why his continued presence would be necessary.

A Trump transition team official told Politico, however, that "to describe him as a body guy would be very, very beneath the role that he actually plays," which is "kind of a consigliere... He has the confidence of Trump and of the family."

The associates say Schiller provides more than just security. Trump has been known to ask Schiller’s opinion on all manner of subjects. When people want to reach Trump, they often call Schiller’s cellphone and he decides who gets through to the boss.

...Schiller mostly remains — as one former campaign aide put it — “the most important man no one has ever heard of.”

Schiller has also directed "intelligence" activities at Trump rallies — which now continue under the auspices of a post-election "Thank You" tour — in which Secret Service agents simply would not engage:

CONCORD, N.C. — Donald Trump’s rally here began with the candidate asking all attendees to raise their hands and take an oath to vote for him, while extended barriers cordoned off the press and plainclothes private intelligence officers scoured the crowd for protestors.

...On Friday, two members of Trump’s private security team wore street clothes to a rally in New Orleans. One of them, Eddie Deck, explained to reporters that his duties were now weighted towards intelligence work researching potential protesters and assisting uniformed security personnel under the direction of Trump’s head of security.

The Secret Service detail will be there in a protective role, not an aggressive one. Trump's "consigliere" Schiller is not bound by such well-defined service. He can be body man, aggressor, spy, and enforcer. And the president-elect is seemingly prioritizing his need to identify dissenters and quash protests even over the safety of the Secret Service members assigned to protect him.

The reason we implement such intense protection of the president is not only because it is ethically responsible to provide security to someone who assumes enormous personal risk to serve their country, but also because the president getting harmed creates a major crisis.

The Secret Service detail is there to protect Trump, but also to protect the country. They must be allowed to do their job.