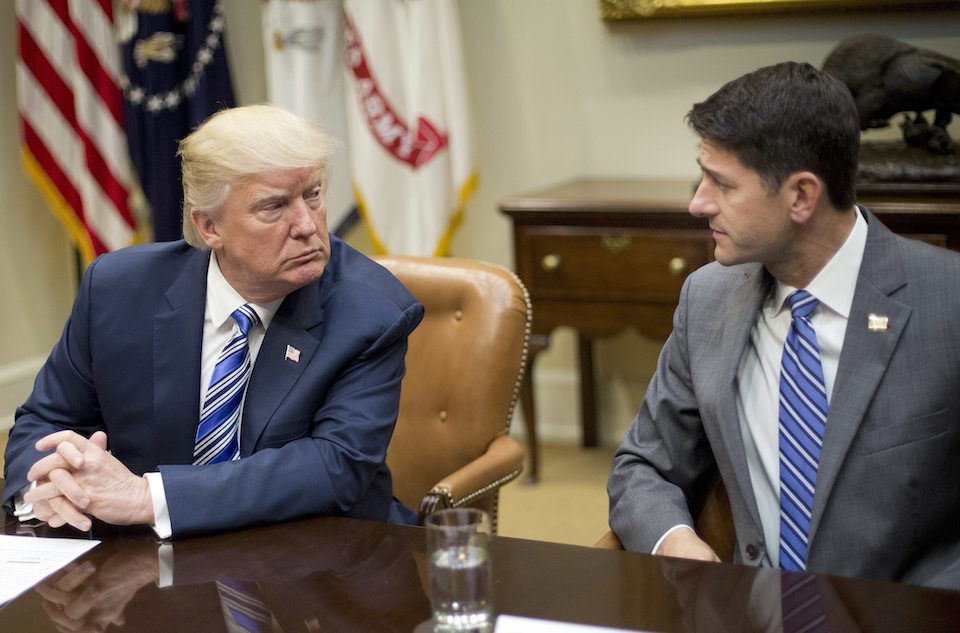 Trump has no allegiance to the Republican Party and doesn't seem to care about constantly embarrassing its leaders.

This time it only took three hours for Donald Trump to humiliate a Republican congressional leader by publicly undercutting him in dramatic fashion. And this time Speaker of the House Paul Ryan was the target of Trump’s erratic behavior.

Back from the summer session, Ryan wasted no time Wednesday morning attacking Democrats for their proposals to have the federal government lift the debt ceiling for three months in exchange for Democratic votes to pass disaster funding to help victims on Hurricane Harvey in Texas and Louisiana.

“Given Republican difficulty in finding the votes for their plan, we believe this proposal offers a bipartisan path forward to ensure prompt delivery of Harvey aid as well as avoiding a default, while both sides work together to address government funding, DREAMers, and health care,” Senate Minority Leader Chuck Schumer (D-N.Y.) and House Minority Leader Nancy Pelosi (D-CA) announced Wednesday morning.

Ryan immediately pounced with a harsh denunciation of the Democratic proposal, which he belittled as “unworkable,” “ridiculous and disgraceful.”

I think that’s a ridiculous idea. I hope that they don’t mean that. Let's think about this: We’ve got all this devastation in Texas. We’ve got another unprecedented hurricane about to hit Florida. And they want to play politics with the debt ceiling? That will strand the aid that we need to bring to the victims of these storms that have occurred, or are about to occur. And they also want to threaten to default on our debt? I think it’s ridiculous and disgraceful that they want to play with the debt ceiling at this moment when we have fellow citizens in need to responds to these hurricanes so that we do not strand them. What the leaders you just described proposed is unworkable, and it could put in jeopardy the kind of hurricane response we need to have.

Three hours after Ryan denounced the deal as “ridiculous and disgraceful,” Trump agreed to it.

“We had a very good meeting with Nancy Pelosi and Chuck Schumer,” Trump told reporters on Air Force One. “We agreed to a three-month extension on debt ceiling.”

For Ryan, this is his latest reward for bending himself into pretzels in order to try to stay aligned with Trump and his zig-zag agenda. Just recently on the issue of Trump wanting to deport undocumented children and young adults in America, Ryan was forced to do a somersault in public view. Like most Republican leaders, Ryan has found out that Trump's political loyalty seems to extend no farther than the Oval Office doors.

Meanwhile, Republicans are reportedly fuming over Trump’s surprise deal with Democrats. “Dems bluffed their way into a total victory,” fumed one Republican source on the Hill.

Just don’t tell Trump, he still likely sees himself as a world-class dealmaker.

Deals are my art form. Other people paint beautifully or write poetry. I like making deals, preferably big deals. That's how I get my kicks.