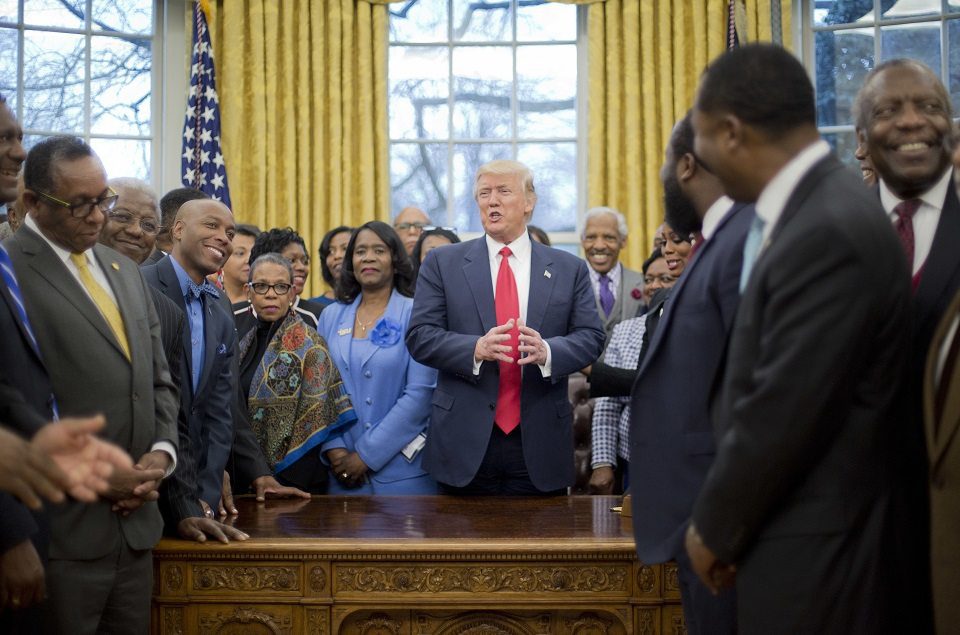 Donald Trump had officials from Historically Black Colleges and Universities in the Oval Office for a Black History Month photo op, while doing nothing to follow up on his promise to fund those schools.

Before a meeting between Donald Trump and officials from Historically Black Colleges and Universities, the Trump administration promoted a news story touting the claim that Trump "seeks to outdo Obama in backing black colleges."

The White House claimed that they were set to roll out a plan detailing how the federal government would continue to support these schools before the end of February, with Press Secretary Sean Spicer claiming that "over the last eight years they've been woefully neglected."

In fact, McClatchy News reported that under President Obama the schools "received $4.7 billion in federal financial assistance in 2013, according to the latest annual report available" which was "2.8 percent of federal funds awarded to all institutions of higher education."

And as of yet, no plan has been offered from the Trump team. Instead, the officials were wheeled in to the Oval Office for a photo op with Trump. And while he did sign an order that moved the Initiative on Historically Black Colleges and Universities from the Department of Education into the executive office of the White House, it says nothing about funding, either on a short or long term basis.

In response to getting stiffed by Trump, John Wilson Jr., president of Morehouse College, issued a press release:

Therefore, since President Trump pledged to "do more for HBCUs than any other president has done before," we could have reasonably expected him to get started by announcing at least an additional $500 million to HBCUs…this year!  And beside the expectation of new funding, there was advance talk of changes like an aspirational goal of 5 to 10 percent for federal agency funding to HBCUs, a special HBCU innovation fund, large boosts in Pell Grant and Title III funding, and extra tax breaks for those in the private sector who contribute to HBCUs.  But, instead of the long-awaited executive order containing or signaling any of those outcomes, the key change is a symbolic shift of the White House HBCU Initiative from the Department of Education to the White House.  It is not possible to measure the impact of this gesture anytime soon, if ever.

Trump offered a public show of making a big, gaudy promise, using the subject of that sales job to promote himself (knowing he has a huge problem with Black voters and white voters turned off by his racism), while never actually addressing the issue at hand.

It is part of a pattern of duplicitous behavior for him: Similarly, Trump used widespread sympathy for a military widow to deflect from criticism of his decision-making as Commander-in-Chief, while he blamed the death of the woman's Navy SEAL husband on the military leadership. And then there are his shady real estate deals and his fraudulent university.

Trump's claims and promises are rarely worth the paper they are written on or the breath used to speak them, and his mendacity toward Historically Black Colleges and Universities is just the latest blatant example.