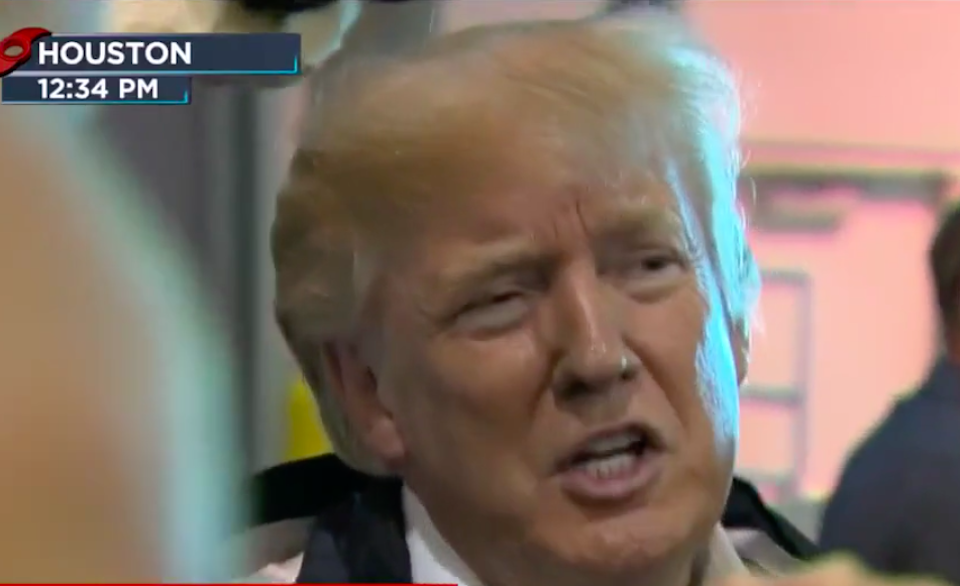 There is apparently no situation or conversation in which Donald Trump cannot manage to work in an insult to the press — even meeting with victims of a natural disaster.

Donald Trump's contempt for the media is about as blatant as it could be. And even meeting with Americans impacted by a massive natural disaster won't dissuade him from taking digs at the press.

Trump has whined and complained about the media too many times to count. "Fake news" is surely one of the most oft-repeated phrases in his lexicon.

But one would think even he could put aside his petty hostility to the free press, as well as his constant need to praise himself, while meeting with victims of Hurricane Harvey, and focus solely on the needs and concerns of people who have lost so much and are struggling to cope.

Alas, this is Donald Trump we're talking about.

During his first visit to Texas, Trump was too busy eagerly looking forward to getting "congratulations" for the government's work on relief and recovery efforts to even remember to mention the victims of the storm.

In fact, he basically treated the visit like a campaign rally, complete with boasts about the crowd size. And he flat-out lied about witnessing the hurricane's devastation "first hand."

On his second visit to Texas, in an attempt to clean up the public relations mess he made, Trump went to NRG Stadium in Houston to speak with victims and help hand out food and supplies.

The crowd seemed largely pleased to see him, taking photos with him and shaking his hand. But leave it to Trump to find a way to ruin what could have been a positive story for him, by indulging in his favorite pastimes: praising himself and dissing the press.

When he stopped for a minute to answer questions from reporters, he declared there was "a lot of love ... a lot of happiness" in the room.

"As tough as this was, it's been a wonderful thing" to meet with those present, Trump said.

He then tried to make a quick getaway, saying "I'm gonna be doing a little help over here." But a reporter asked him what people have been saying to him, and Trump went full Trump in response.

Because what statement from Trump is complete without a reminder that he thinks the media, other than Fox News, are just a bunch of haters.

Give that man the National Medal of Science.

It's good that Trump finally remembered that part of being president is remembering that people exist.

But it would have been better if, for just once, he put those people front and center, and left the self-congratulatory attitude and the snide antagonism toward the press behind.