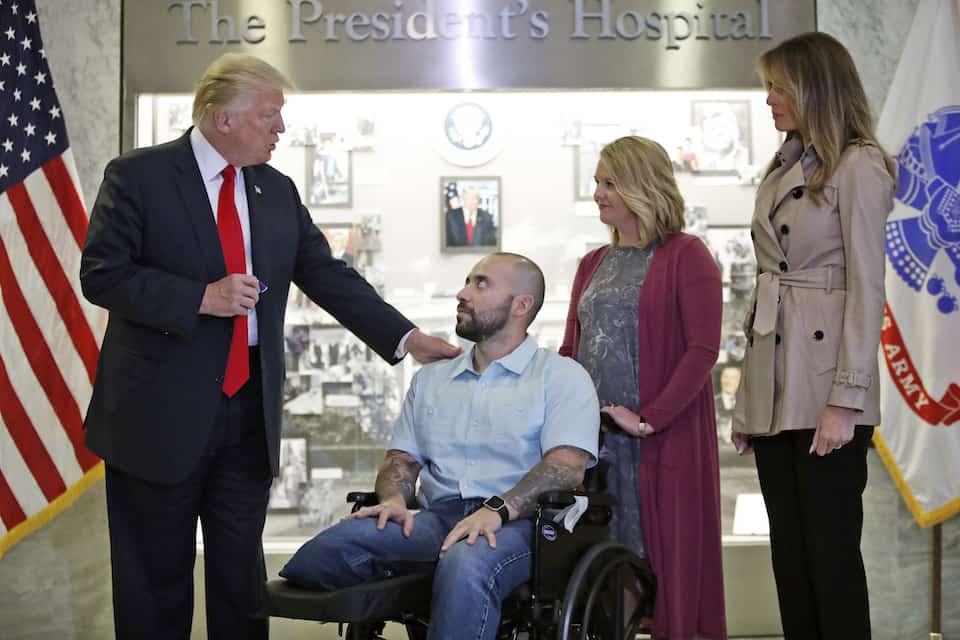 Donald Trump's failures as president are matched only by his failures as a human being, like his use of a wounded veteran for a photo-op, at which he presented a Purple Heart with a chipper "Congratulations!"

Over the weekend, Donald Trump used a trip to National Military Medical Center to award a Purple Heart as a photo-op, breaking with President Obama's tradition of making such presentations in private.

But of course, Trump could not possibly pass up a chance for publicity.

Sergeant First Class Alvaro Barrientos was recently wounded in Afghanistan, and instead of presenting the Purple Heart in private, Trump used the occasion as a photo opportunity, complete with cheesy pose:

Trump presents Sergeant First Class Alvaro Barrientos with a Purple Heart at Walter Reed. "When I heard about this I wanted to do it myself" pic.twitter.com/pbVbj4LAep

That presentation was made in exactly the way you would expect from a reality television host who has never made such a sacrifice of his own, or known anyone who has — with the chipper congratulatory tone one might use to reveal who won this week's elimination challenge (from a pool report, via email from The White House):

On background from a White House official:

Sergeant First Class Alvaro Barrientos was recently injured in Afghanistan while deployed and for the wounds he sustained, he is receiving the Purple Heart.

Then POTUS presented the Purple Heart to Mr. Barrientos. "When I heard about this I wanted to do it myself," POTUS said. "Congratulations. Tremendous."

It is worth noting that this account is not from some journalist trying to make Trump look bad; it is from a White House official.

So, not only does Trump not understand or care about the solemnity of such an occasion, neither does anyone else in his administration.