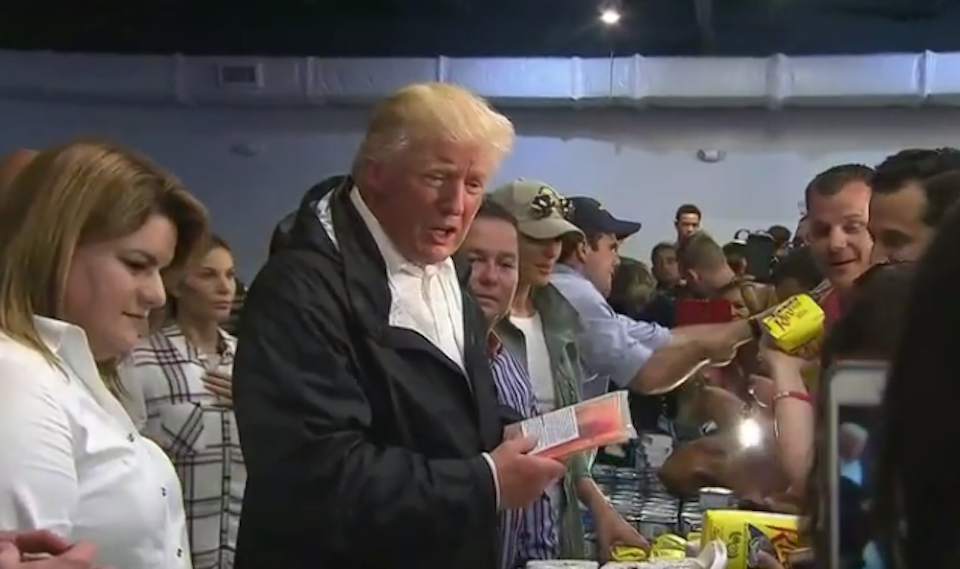 Trump may have reached a new low in his inability to show empathy.

Donald Trump's abridged trip to the devastated island of Puerto Rico Tuesday was a complete disaster — for him.

After largely ignoring the suffering of 3 million Americans, only to then blame them for their own catastrophe and launch a prolonged Trumpian Twitter war against San Juan Mayor Carmen Yulin Cruz, Trump demonstrated his infamous ignorance and stunning lack of empathy when he finally spent a few hours talking to the island's residents.

In one jaw-dropping exchange, Trump scoffed at the purified water Puerto Ricans are drinking to survive and managed to insult an aid worker from a church who is helping by distributing purification kits.

Pres. Trump: "Would you drink it?"

“Really?” Trump said, a disgusted look coming across his face.

“Is this your company or something?” Trump asked the woman, seeming suspicious of the aggressive pitch.

Trump might find the idea of drinking water purified with iodine tablets disgusting, but it's not as if he's offering any alternatives. He has not, for example, donated any Trump Ice — the branded bottle water company he owns — to hurricane victims so they do not have to drink "dirty water" instead.

That Trump apparently finds it inconceivable someone would volunteer to help disaster victims without some sort of profit motive simply reveals a stunning level of cynicism from Trump. Not that it should be surprising. Trump, after all, initially expressed hesitation in doing everything possible to help the people of Puerto Rico out of concern for the "shipping industry."

Despite Trump's embarrassing and fumbling trip, he insisted Wednesday morning that it had been "a great day in Puerto Rico." Perhaps he only needed one night to forget the devastation he saw and the desperate lengths Puerto Ricans are going — including drinking "dirty water" — in order to survive.