Home National Trump wants Sally Yates to shut up, but the first powerful man...
Progressive journalism is under attack. Please help us fight back!
DONATE 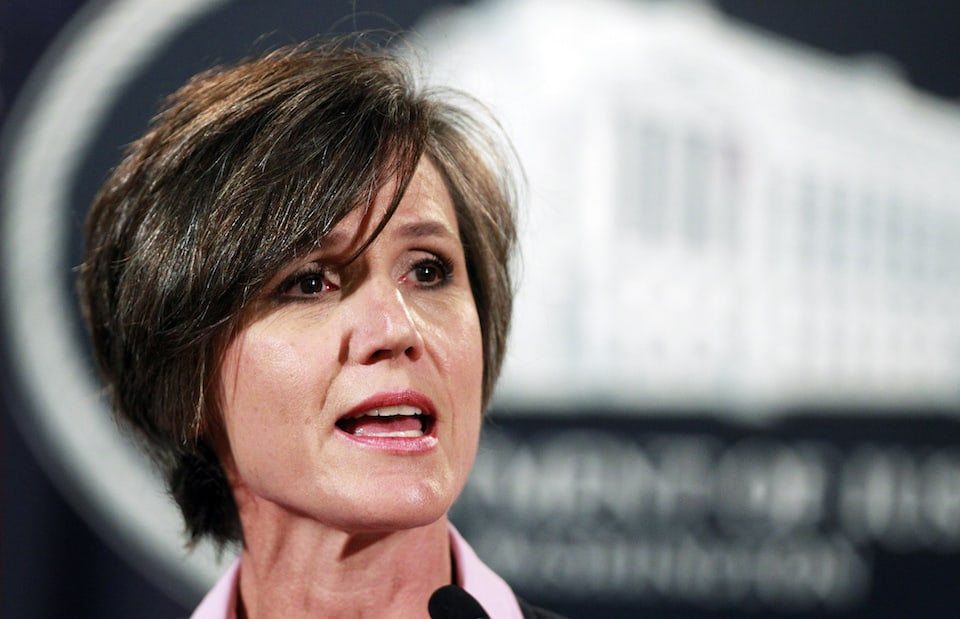 Donald Trump is apparently quite angry that former acting Attorney General Sally Yates is testifying about his team's ties to Russia before a Senate committee on Monday. But Yates' track record shows that when powerful men have tried to shut her up, she kept at it and got convictions.

Donald Trump launched an unprecedented attack on former acting Attorney General Sally Yates ahead of her testimony to the Senate panel investigating Russian interference in the 2016 election.

He was apparently unnerved by advance word that Yates will discuss the Trump administration's refusal to heed warnings about how former National Security Adviser Michael Flynn could be compromised by Russia.

Trump is not the first man in a position of power who has tried to beat Yates down.

When Yates investigated then-Atlanta Mayor Bill Campbell for corruption, bribes, and questionable campaign contributions, he and his allies pushed back on Yates. According to Pulitzer Prize-winning reporter Douglas Blackmon, "Mayor Campbell and his allies waged an increasingly harsh public relations campaign against Yates."

Despite the diversity of the first truckload of racketeers she sent to prison, rumors were spread that Yates was out to get black officials. Allies of the mayor said she was investigating him after he didn’t endorse Yates’ husband in an unsuccessful congressional bid. She became a near-pariah at City Hall.

But, he continued, "Through it all, Yates quietly kept digging, indicting, and usually convicting."

Campbell was later indicted and found guilty of tax evasion, and was sentenced to 30 months in prison.

Yates has a track record as an effective prosecutor, working as the lead prosecutor in the case against anti-abortion extremist Eric Rudolph, who bombed the Olympic Park in Atlanta, Georgia.

After prosecuting nine former police officers who took money in a protection racket, Yates said in a press conference, "This case revealed a troubling number of officers from a variety of law enforcement agencies who betrayed their oaths to protect and serve, taking cash from the very criminals they should have been arresting."

Former FBI Director Louis J. Freeh was effusive in his praise of Yates, telling the Washington Post that she is "remarkably talented and has a solution to every problem." Freeh added, "She has no ego. She would rather be writing a sentencing memo than get up and have a press conference."

This is not the track record of a woman who is intimidated by blustery men attempting to cover up crimes, no matter how much noise Trump tries to make.