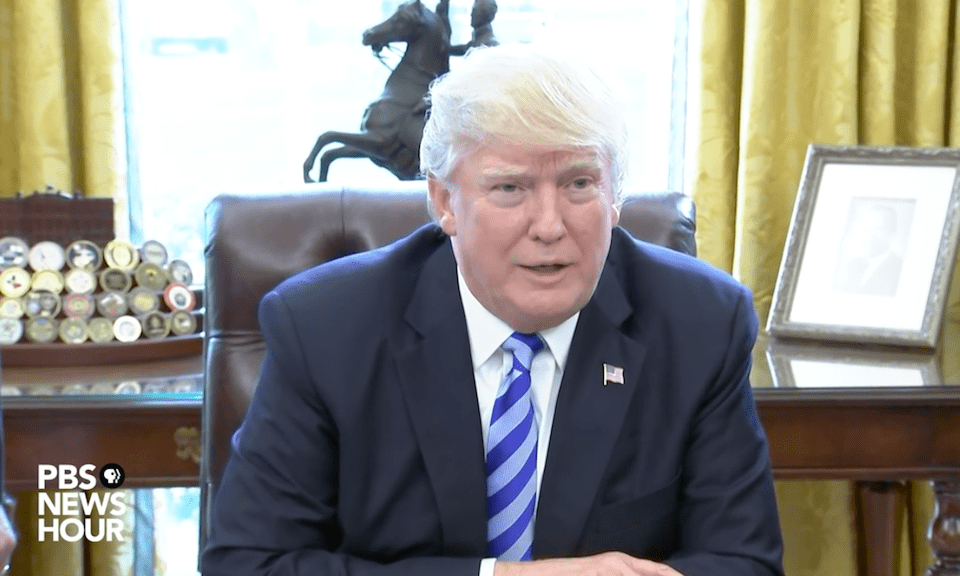 Donald Trump signaled a clear and significant shift this weekend, from blaming Democrats for the failure of the Republican plan to repeal Obamacare, to lashing out at Republicans. Several administration officials reinforced that shift in appearances on the Sunday political chat shows.

Moments after the failure of the Republican plan to repeal Obamacare on Friday, Donald Trump took to the television cameras for a repetitive and vindictive rant about the defeat.

In a predictable move, Trump laid the blame for the bill's failure squarely at the feet of the Democrats, specifically House Democratic Leader Nancy Pelosi (D-CA) and Senate Democratic Leader Chuck Schumer (D-NY), whom he called "the losers":

...health care bill, I'd be totally open to it, and I think that's going to happen. I think the losers are Nancy Pelosi and Chuck Schumer, because now they own Obamacare. They own it — 100 percent own it.

Over the weekend, though, Trump turned dramatically on Republicans, first by pointing his Twitter followers at a Fox News segment calling for House Speaker Paul Ryan (R-WI) to step down, and then by tweeting a harsh assessment of some prominent conservative groups:

Democrats are smiling in D.C. that the Freedom Caucus, with the help of Club For Growth and Heritage, have saved Planned Parenthood & Ocare!

In an appearance on Fox News Sunday, White House Chief of Staff Reince Priebus insisted that the Ryan tweet was a "coincidence," but claimed he had not spoken to Trump about it. When asked about Trump's tweet slamming conservatives, however, Priebus was in full agreement, while also later describing the true reason for Trump's shift:

WALLACE: (Trump) said this morning, 'Democrats are smiling in D.C., that the Freedom Caucus, with the help of Club for Growth and Heritage [two conservative think tanks] have saved Planned Parenthood and ObamaCare.' So, he seems to be putting it right on the right wing — the hard-line conservatives in your own party.

PRIEBUS: Well, I think the president is 100 percent correct and he hits the bull's eye in that tweet, like he often does.

The fact that some of these members took that and decided not to move forward with it, I think, is a real shame, and I think the president is disappointed in the number of people that he thought were loyal to him that weren’t.

Priebus criticized moderate Republicans, in addition to the Freedom Caucus, and repeatedly echoed Trump's assertion that the administration would be willing to work with Democrats once Obamacare "explodes" (which the Congressional Budget Office says will not happen). Priebus' comments were reinforced by the only other White House official to make the Sunday rounds, budget director Mick Mulvaney, who singled out the Freedom Caucus and moderates like Rep. Charlie Dent (R-PA) for blame.

Lest anyone be fooled by the Trump administration's head-fake toward bipartisanship, though, Priebus also made it clear that Trump would abandon Democrats at the first available opportunity:

WALLACE: I want to get to that, because this is like the third time now in our brief conversation that you’ve talked about reaching out to Democrats. Is the lesson president is taking away from this defeat that he's got to change his legislative strategy, that you don't have a governing majority in the House that the Freedom Caucus never seems to get to yes, and that he's got to be more of a bipartisan president and reach out to Democrats and try to pick up some votes because he can't count on Republicans to give you the majority?

PRIEBUS: Well, I don't know if he agrees with everything you just said, but what I do think is that everything is on the table. We’ll give these guys another chance. And it’s not — that's not really the point. If we can come up with a bill that accomplishes the goals of the president with Republicans alone, then we’ll take it and we’ll move forward with it.

Trump's tweets and this offensive by White House officials is being spun as an opening for Democrats, but by all appearances, it is merely an attempt to use the threat of bipartisanship to whip Republicans into toeing the line, as well as to shift blame away from Trump.

However, Republican obstinacy helped deliver a victory for Democrats on Friday, and it may yet provide them with another opportunity now.