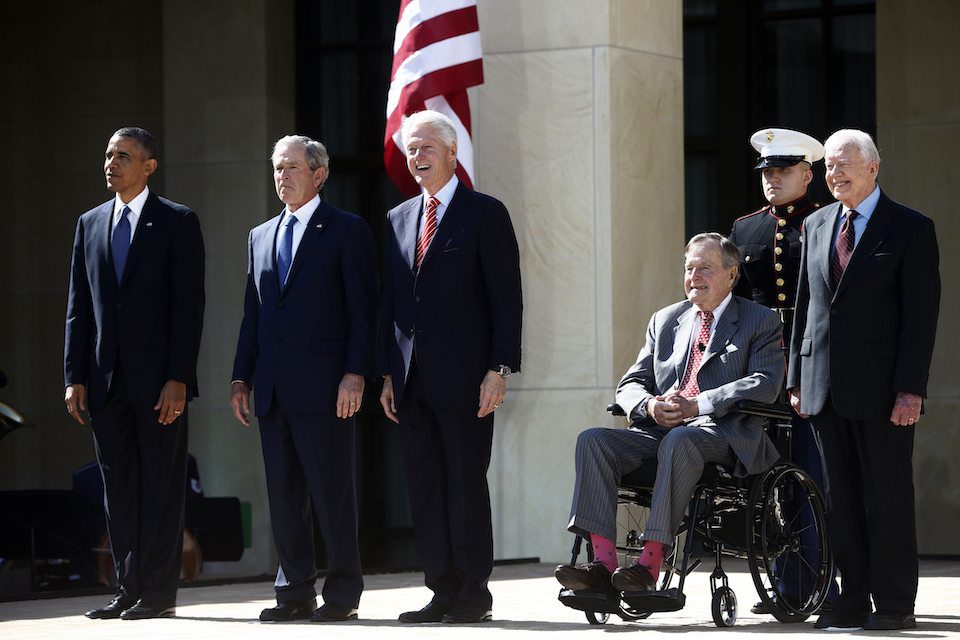 All five living former U.S. presidents are doing more to help Puerto Rico right now than the current one.

Donald Trump has had a lot of things on his mind for the past few days.

He exploded with rage at Sen. John McCain for refusing to vote to end health care for millions of Americans. He attacked black athletes for kneeling in protest of police brutality and unsuccessfully demanded a boycott of the NFL. And he continued to inflame tensions with North Korea.

The one thing he forgot to do was help Puerto Rico.

An island of American citizens with a larger population than 21 states, Puerto Rico was utterly devastated by Hurricane Maria. Millions of people lost power and cell phone service, and entire towns were destroyed. Officials describe the devastation as no less than "apocalyptic."

Trump needs funding from Congress to truly give Puerto Rico the aid it needs, but that is no excuse for completely and totally ignoring the island. He could have instructed the Secretary of Defense to send naval vessels, as Hillary Clinton pointed out. He could have at the very least tweeted his sympathies and told Puerto Ricans that help is coming.

But the other five living former U.S. presidents are taking a stand.

These former presidents have spent much of their careers after the White House doing philanthropic and humanitarian work. Carter, despite being in his nineties and having just survived metastatic brain cancer, famously still goes out and builds homes with Habitat for Humanity. George W. Bush has made helping to combat cancer in Africa a key focus of his post-presidential life. Obama launched a foundation to help train a new generation of community organizers and promote active civic participation.

And despite two years of partisan maligning by the Republican Party, the Bill, Hillary, and Chelsea Clinton Foundation has been incredibly successful worldwide, almost singlehandedly making AIDS medication affordable in the developing world.

The past five presidents have now shown more leadership on behalf of an American territory than the person who now occupies the office they once held.

It is time Trump looked beyond his narcissism and learned from their example.