Home National Trump's base can't save him: Nixon had GOP support when he went...
Support progressive journalism.
Donate today 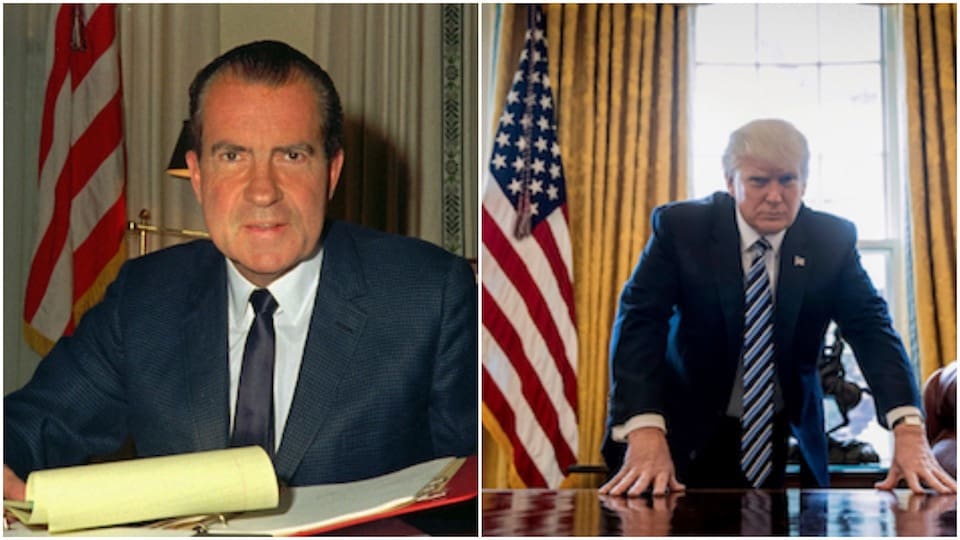 Donald Trump is wrong to believe he's safe from impeachment because Republicans still support him. Days before Richard Nixon was forced to resign in shame, he had similarly high levels of GOP support. It didn't help.

Donald Trump has an anemic approval rating of 39 percent, in a recent NBC/Wall Street Journal poll.

This puts him in what NBC describes as a "midterm danger zone" for Republicans, comparing it to George W. Bush after the Iraq War, Katrina, and the failed plan to privatize social security. Those conditions led to a Democratic takeover of both the House and Senate soon after.

It is also a low point in approval that President Barack Obama never reached.

But the bad news in the same poll shows that among Trump voters and Republican voters, his approval rating is at 87 and 82 percent, respectively.

This steadfast support for Trump from his party concerns many progressives in the resistance. Even with the combination of negatives from Trump in the presidency — rampant corruption; Russian collusion; hostility to minorities, women, and LGBTQ Americans; cold-hearted health care repeal; and on and on — will Republican support negate efforts to resist his presidency?

It is true that unlike in the Watergate era, when senior Republicans at long last realized Richard Nixon's presidency had to be ended for the good of the country, today's Republicans are largely toothless and willing to back Trump to keep hold of power.

But what has been forgotten is that right up until the bitter end of his presidency, when it was proven that Nixon had authorized the Watergate break-in and cover-up, and abused his power as president to subvert justice and democracy, he still had the strong support of a majority of Republican voters.

On Twitter, Will Jordan, former elections editor for YouGov, dug up some of the old numbers that show the Republican reaction to Trump is not out of the ordinary. Unfortunately.

A month before Senate hearings into Watergate began, Nixon had a 76 percent approval rating within his own party, while America at large placed him in Trump territory at 44 percent approval.

Nixon resigned on August 8, 1974, yet in a poll conducted just days before between the 2nd and 5th of August, 59 percent of Republicans said he should not resign.

Jordan also found that two months before Nixon resigned, 51 percent of people complained about the media covering the story "too much."

And the media. June 1974, two months before resignation.

51% say media has covered the issue ...too much pic.twitter.com/8ODB5vpj5G

As Trump continues to defile the office of the presidency, more revelations about his corruption and misbehavior emerge, and support for his impeachment surges, frustration will grow about more Republicans not abandoning him. But the historical record shows us that there is precedent for an unlawful Republican president retaining the support of his base of voters, even as history rises to a conclusion.

The modern Republican Party does not have the backbone that the party did in the 1970s to demand Trump's resignation, but the trend against Trump is meaningful and significant for what lies ahead. Just like it was for Nixon.