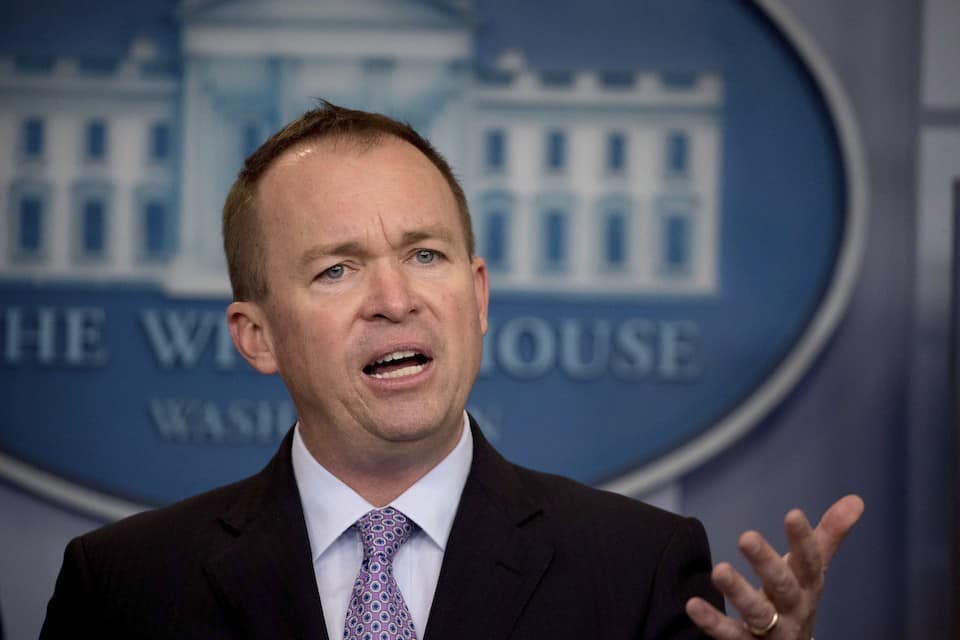 Donald Trump's budget director, Mick Mulvaney, is echoing Trump's "deep state" conspiracy theory, alleging that the terrible findings on the health care bill from the Congressional Budget Office are the work of a former Obama official.

Office of Management and Budget Director Mick Mulvaney is the latest Trump administration official to join in and add to his boss' conspiracy theory about "deep state" operatives affiliated with the Obama administration engaged in a sabotage campaign.

The nonpartisan Congressional Budget Office (CBO) scored the Republicans' "Affordable Health Care Act" to repeal Obamacare, backed by Trump and rammed through the House by Speaker Paul Ryan. The CBO found that the bill would be a disaster in many ways, including that 23 million Americans would have their health insurance stripped away if the bill becomes law.

According to Mulvaney, however, these findings are a false flag. He told the conservative Washington Examiner, "We’re hearing now that the person in charge of the Affordable Health Care Act methodology is an alum of the Hillarycare program in the 1990s who was brought in by Democrats to score the ACA."

Holly Harvey, the head of CBO's health analysis division, served at the Department of Health and Human Services during the Clinton presidency.

But the head of the CBO is Keith Hall, who ultimately signed off on the analysis so devastating to Republicans. Hall was the chief economist for the Council of Economic Advisers under President George W. Bush. And he was hand-picked for the job by Tom Price, who currently serves as HHS secretary under Trump.

Republicans have been trying to delegitimize the CBO's findings, rushing the bill through the House without a score, because they were aware of how bad it would be. In his attack on the CBO's findings, Mulvaney also suggested it is incapable of providing a nonpartisan assessment, questioned its methodology, and accused it of trying to make the Republicans' bill look bad, saying, "It's almost as if they went into it and said, ‘Okay, we need this score to look bad. How do we do it?'"

Rep. John Yarmuth (D-KY) called out Mulvaney for promoting his conspiracy-laden accusation. In a statement, Yarmuth said Mulvaney was guilty of "impugning the integrity of a public servant who has dedicated her career to producing sound analysis for decision makers." He also called on Mulvaney to apologize.

The conspiracy theory that operatives associated with former President Barack Obama are embedded in the government and working to undermine Trump has had an audience at the highest levels for months.

Trump is reportedly obsessed with this theory, and has internally declared war on it. His top strategist, Steve Bannon, appears to be a true believer as well, and has encouraged Trump to indulge in the associated paranoia.

Much of the thinking behind the idea — which has no basis in fact — comes from informal Trump adviser and conspiracy theorist Alex Jones, who also believes that the Sandy Hook school shooting was a hoax and that the 9/11 attacks were pulled off by the U.S. government.

Instead of confronting the fallout of the administration's poorly planned and devastating health care initiative, Mulvaney has donned a tinfoil hat, locked arms with Trump, and ventured into the world of aliens and swamp creatures.