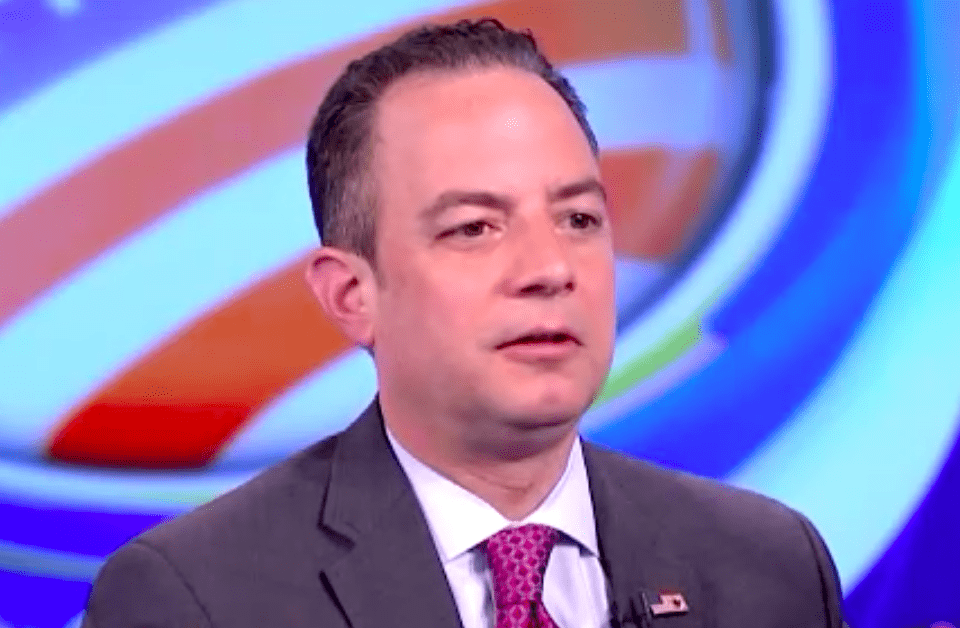 In the White House, Donald Trump is embracing a First Amendment crackdown as his Chief of Staff admits that the administration is looking at ways to limit free speech in America.

Donald Trump's Chief of Staff Reince Priebus declared that the Trump administration is currently in the process of "looking at" ways to limit speech in America.

Appearing on ABC's This Week, Priebus said that Trump is looking at ways to change libel laws, which would make it easier for Trump to sue news outlets that publish information he disagrees with.

Asked about an idea floated by Trump while he was a candidate that people burning the American flag should be arrested or have their citizenship stripped, Priebus said it is "is probably going to get looked at."

KARL: I want to move on, before you go — we have a segment coming up with Ann Coulter and Robert Reich. Of course, there's a big controversy at Berkeley over freedom of speech. I want to ask you about two things the president has said on related issues.

First of all, there was what he said about opening up the libel laws, tweeting, 'The failing New York Times has disgraced the media world. Gotten me wrong for two solid years. Change [the] libel laws?'

That would require, as I understand it, a constitutional amendment. Is he really going to pursue that? Is that something he wants to pursue?

PRIEBUS: I think it's something that we've looked at, and how that gets executed or whether that goes anywhere is a different story. But when you have articles out there that have no basis or fact and we're sitting here on 24-7 cable companies writing stories about constant contacts with Russia and all these other matters –

KARL: Do you think the president should be able to sue the New York Times for stories he doesn't like?

PRIEBUS: Here's what I think: I think that newspapers and news agencies need to be more responsible with how they report the news. I am so tired –

KARL: I don't think anybody would disagree with that, it's about whether the president should have the right to sue them.

PRIEBUS: And I already answered the question. I said this is something that's being looked at, but it's something that, as far as how it gets executed, where we go with it, that's another issue. But I think this is a frustration of unnamed sources, of things that the FBI has told me personally is complete BS, written in a newspaper article, in my office one-on-one: This here is not true. And guess what? But its sitting there on the front page. So how is it possible, and what do we have? 24-7 cable, about a story, about intelligence, that the actual intelligence agencies says is not true. And we deal with it every day.

KARL: And then just very quickly the other thing he talked about is, flag burners should either possibly go to jail or have their citizenship revoked –

PRIEBUS: Well our flag needs – people need to stand up for our flag.

KARL: Is he going to pursue that?

PRIEBUS: The one thing that we have in common as Americans is our American flag and I think it's something that, again, is probably going to get looked at. But our flag should be protected and it's Donald Trump that talks about that issue, and you know what? It's a 70 percent issue in this country and he wins every day and twice on Sunday on our flag.

Trump has long demonstrated an avowed hostility to free speech and expression. While he has used the media to make a name for himself and gain political power, Trump has bristled whenever it has held him accountable for lies and misinformation.

His senior policy adviser Stephen Miller declared early in the administration that Trump's power "will not be questioned," while Trump has hailed authoritarian leaders around the world who share his skepticism of the free flow of information and ideas.

The First Amendment is one of the bedrock principles of American life, and it has to be defended against tyranny of the sort espoused by Donald Trump.