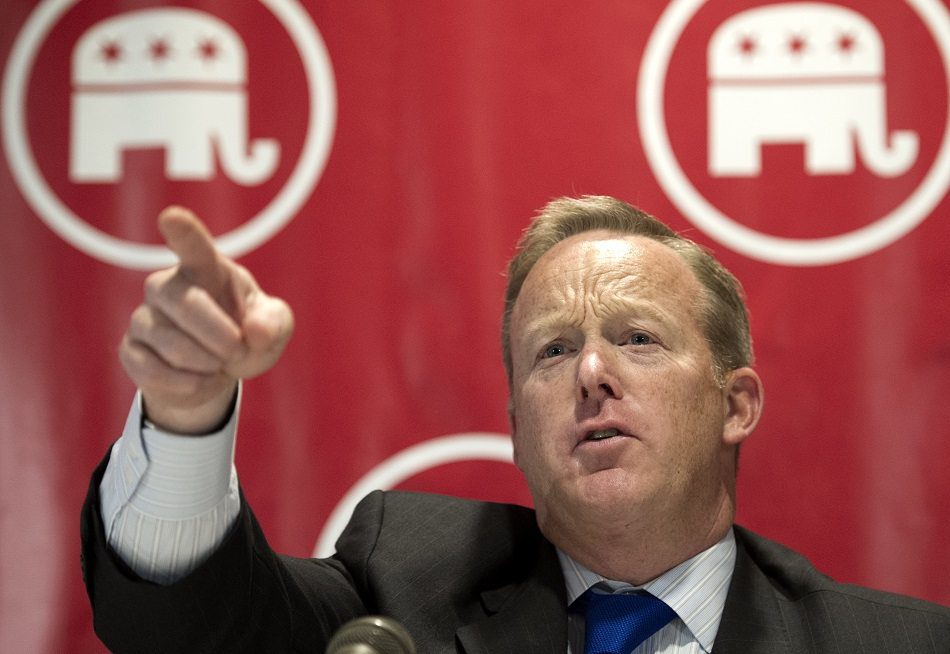 There is yet another strategy emerging from Team Trump to divert attention away from Russia's role in getting Donald Trump elected: That the DNC and Clinton campaign chairman John Podesta were asking for it.

President-elect Donald Trump and his incoming administration have gone to extraordinary lengths to deny and otherwise downplay the Russian interference in the 2016 election that the FBI and CIA agree was intended to help elect him, including dismissing the entire "age of computer" out of hand.

Now Team Trump has taken this effort to a despicable new low by attempting to shift the blame for Russia's crimes onto the Americans who were victims of it.

First, there was Trump White House Press Secretary-designate Sean Spicer, who asked Jake Tapper why the Democratic National Committee was not being held responsible for the hacks:

SPICER: At what point is it incumbent upon you guys in the media to ask the DNC, "What measure did they take to protect this?" Because it seems to me as though there's a lot of talk about the DNC not doing what they should've done to protect their own network servers. I'm not saying in any way, shape, or form, to be clear, any attempt to hack or to do anything nefarious, is wrong and illegal. But at some point, the question hasn't even been asked of the DNC, "Did you take basic measures to protect the data that was on there?" No one wrote those emails, no one put a private server on there, and no one seems to have done the due diligence at the DNC to protect their own system. So I think there's a degree to this conversation —

TAPPER: I don't think there's any question that they did a horrible job —

SPICER: But no, but have you ever asked that question of anyone at the DNC? Where's the responsibility of them to protect their systems? The outcome is not acceptable, I agree with that, nobody is by any way saying or suggesting that that's acceptable behavior. But I don't believe once I've ever seen an interview where anyone at the DNC was ever asked a question about whether they take any responsibility for what clearly appears to be a lax effort on them to protect their own networks.

Spicer claims not to be expressing approval of the outcome — though his boss certainly has, at least tacitly — but he is clearly saying that the DNC is responsible for the criminal intrusion that was committed against it.

Even more outrageously, Trump campaign surrogate and former advisor Steve Cortes so vehemently blamed John Podesta for the theft of his own email that MSNBC host Chris Hayes had to remind him what legally constitutes hacking. Cortes also throws in an ableist slur for good measure:

CORTES: Podesta was not hacked. He gave into a phishing scheme, which by the way, was as juvenile as the emails that we all receive about a Nigerian prince.

HAYES: You think it was his fault?

HAYES: So you believe John Podesta is a senile grandfather because he was the victim of a phishing attack?

CORTES: Yes, but here's the more important point too. What we keep talking about is, I don't know who did the hacking of the DNC. Podesta was not hacked, he fell for a scheme. The DNC was hacked, that is clear. Who did it? I don't know. What we do know though is what was revealed by the hack, and what was revealed was a Democratic Party that was corrupt to its core, particularly when it involved their primary and Bernie Sanders. And the more the American people learned about the Democratic Party and the more they learned about Hillary Clinton, the less they liked and trusted them, and it's one of the reasons we won.

HAYES: Right, Steve, that's not, I don't think that's borne out by the data, but let's just talk for a minute about this idea that this was John Podesta's fault. It does appear to have been a phishing link. Criminal statutes on hacking do include that kind of behavior, right? So if you, under false pretenses, get someone's account from a phishing link, that is a criminal violation, just to be clear what the law says hacking is.

CORTES: Sure, listen, I'm not saying it was the act of a gentleman.

As Hayes noted, the theft of Podesta's emails was the act of a criminal, not a prankster.

Trump has consistently resisted even admitting that the Russian hackers he summoned in July interfered in our elections, let alone trying to do anything about it, and most Republicans have gone right along with him.

President Obama's imposition of sanctions (and possible covert measures) against Russia may change that dynamic, and force Trump into a confrontation with members of his own party.

But unless and until that happens, we can look forward to ever more novel — and ever more disgraceful — ways for Trump and his associates to shield the president-elect, and Russia, from the consequences of these criminal acts.