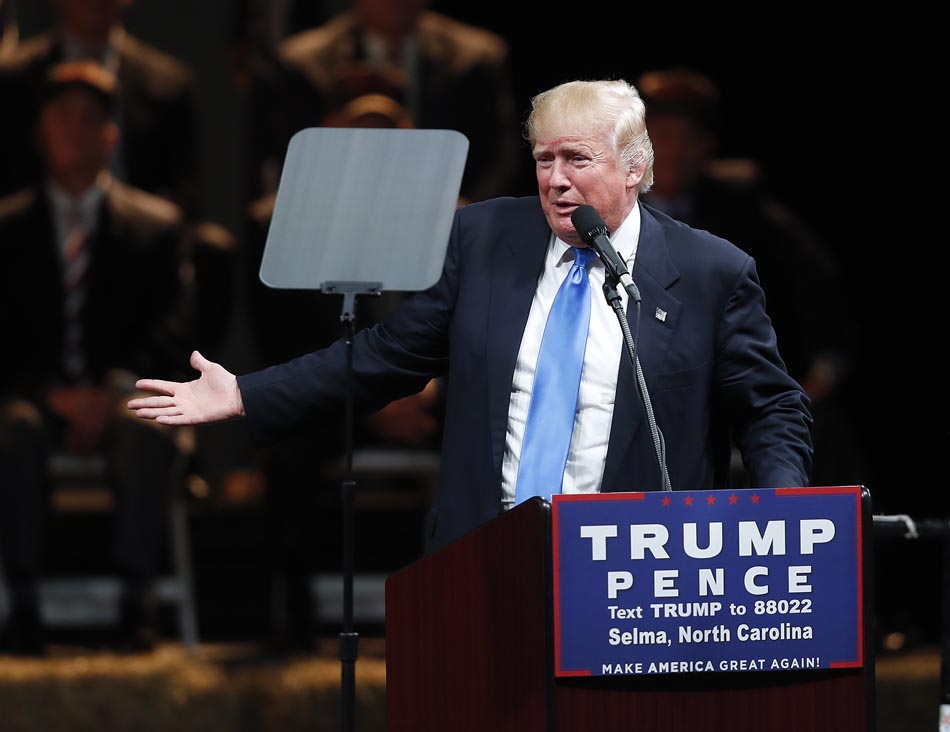 Donald Trump has not been able to best Hillary Clinton on policy, on preparedness, on competence, or on temperament. So he has turned to the only card he has left: Demeaning her for being a woman.

Speaking on a stage with members of the military seated behind him, Donald Trump's closing argument against Hillary Clinton includes the contention that a woman simply cannot be president.

Trump, standing in front of Medal of Honor recipients: “to think of HER — being their boss? I don’t think so…I know what they’re thinking.” pic.twitter.com/BPXLnwHxo5

"You know, when I look at these great admirals and these great generals and these great Medal of Honor recipients behind me, to think of her being their boss?" he said. "I don't think so. And you know, they're incredible patriots. They would never say a thing. But I know what they're thinking. It's not for them, believe me."

Major General (Ret.) Paul Eaton, a former commander in Iraq and a senior adviser to VoteVets.org, issued a statement firmly pushing back on Trump's claim:

Apparently, Donald Trump never was taught how the military works, and certainly not in that military-themed private school. Generals, on down to Privates and Airmen, and Admirals on down to the newest Sailor, respect the command structure of our military. We all took the oath to support and defend the Constitution of the United States, and to defend America against all enemies, foreign and domestic.

Eaton noted he speaks to "many generals and other flag officers...who do not want Donald Trump to be their boss," and that he would personally prefer Clinton, were he still in active duty.

As a retired Major General, I’d want Hillary Clinton as my boss, if I was still in active duty. She has proven herself to be immensely capable, deeply knowledgeable, and a steady, firm hand ready to guide our military in these dangerous times. As a father, with sons serving, there is no doubt that I would vastly prefer that their Commander in Chief be Hillary Clinton, not her unhinged opponent, Trump.

In addition to Trump's deep misunderstanding of the military, suggesting a woman cannot be an effective leader of men is the most basic expression of gender bias.

The assertion that men in traditionally male-dominated fields — military, police, construction, mining, science, etc. — cannot be led by women is part and parcel of maintaining those fields as bastions of male exclusivity. Women have always faced steep resistance when we try to force our way past resistant gatekeepers, and woman have always proved that we can be just as capable as men, given the same opportunities.

Now, a woman is petitioning to be the president and commander-in-chief. She is meeting the same resistance and the same narratives about female bosses that greet any other woman who tries to be first — and for the same reason.

Bias is about a lot of things: Fear, hatred, resentment, privilege. It is also about a failure of imagination.

Trump is trading on the fact that many people cannot imagine a woman leading the country — and its military — simply because a woman has never done so before. It is a deeply cynical ploy, to try to leverage women's historical exclusion in order to maintain our continued exclusion.

But it is all he has left. He cannot beat her on the merits. And so, in the closing days, he invokes once again the power of institutional sexism to make his argument for him: Clinton cannot be president because she's a woman.

It is a desperate and pathetic bid. And, ironically, it reveals that the woman against whom he is running, who needs not rely on ancient prejudices to win, is the stronger candidate. And has been, all along.