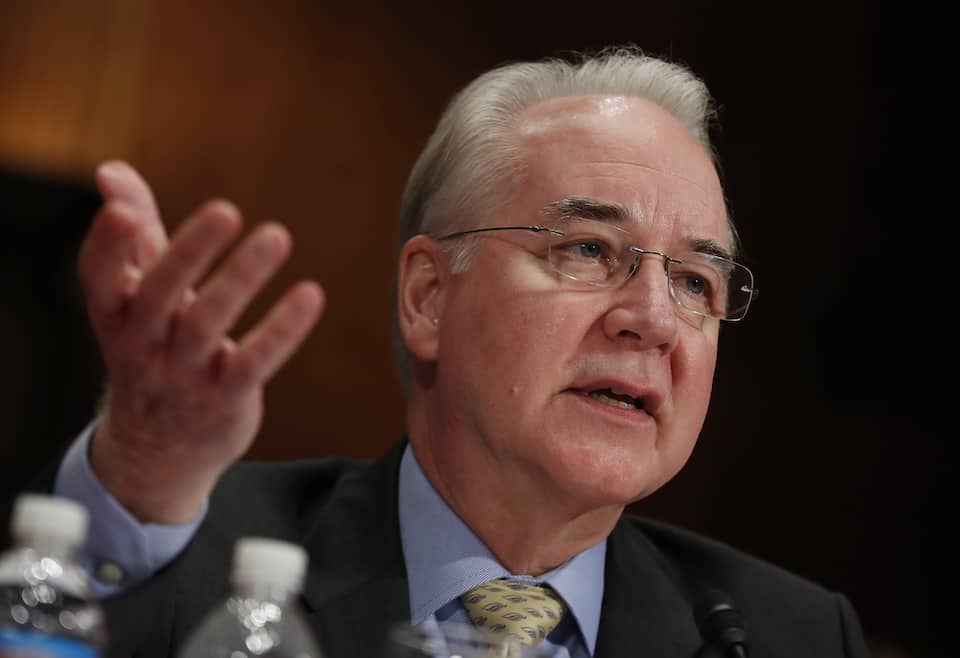 The Republican plan to destroy health care is so secret that most Republicans haven't even seen it. And that includes Donald Trump's White House.

Senate Republicans are keeping their secret plan to repeal health care so very secret that not even Donald Trump's Secretary of Health and Human Services Tom Price has seen it.

Price, before joining Trump's administration, represented Georgia in Congress, where he was one of the leaders in the fight to repeal Obamacare. That was certainly part of the reason Trump chose him to lead Health and Human Services. Given his record of opposition, one would think that Republicans in the Senate would trust him with their plan, if not include him in the crafting of it.

But in a stunning exchange with Illinois Democrat Dick Durbinduring a Senate appropriations hearing, Price admitted that even he has not seen the bill.

This is rather stunning. @SecPriceMD tells @SenatorDurbin he hasn't seen the Senate GOP health care bill either.

DURBIN: Last question I have for you is this. You assume that there is going to be Trumpcare or affordable care repeal in your budget. Have you or anyone in your department seen what the Senate Republicans are working on in terms of their version of Trumpcare?

PRICE: I've had multiple conversations with senators who are interested in making certain that we have a health care system that works for patients. My staff has provided technical assistance. I haven't seen any legislative language.

DURBIN: You have not seen it? You haven't seen it either?

PRICE: As I say, my staff has provided some technical assistance to individuals, but I haven't seen any legislative—

DURBIN: Well, we haven't seen it either. And we're told that we're going to vote on it in a matter of days, without a CBO score and without any revelation of what's included in that. Do you think that's a responsible thing to do in terms of the health care of all the people living in America?

Senate Republicans are hoping they can pass their bill in secret, without any hearings, without any input from Democrats, or any female senators, or even from their fellow Republicans.

And while little is known about the bill, because of the unprecedented secrecy surrounding it, other members of the Senate, including Democrat Ron Wyden, have warned that the differences between the Senate version and the disastrous bill passed by the House are merely "cosmetic."

Under the House bill, 23 million people would lose their coverage, insurers would again be allowed to discriminate against pre-existing conditions, and those who rely on Medicaid expansion could find themselves with no coverage at all.

If the plan to repeal Obamacare is such a secret that it cannot be shared with the very same Republicans who have been fighting so hard for years to do exactly that, it must be even more harmful and horrible that anyone can imagine. And that should have everyone worried.