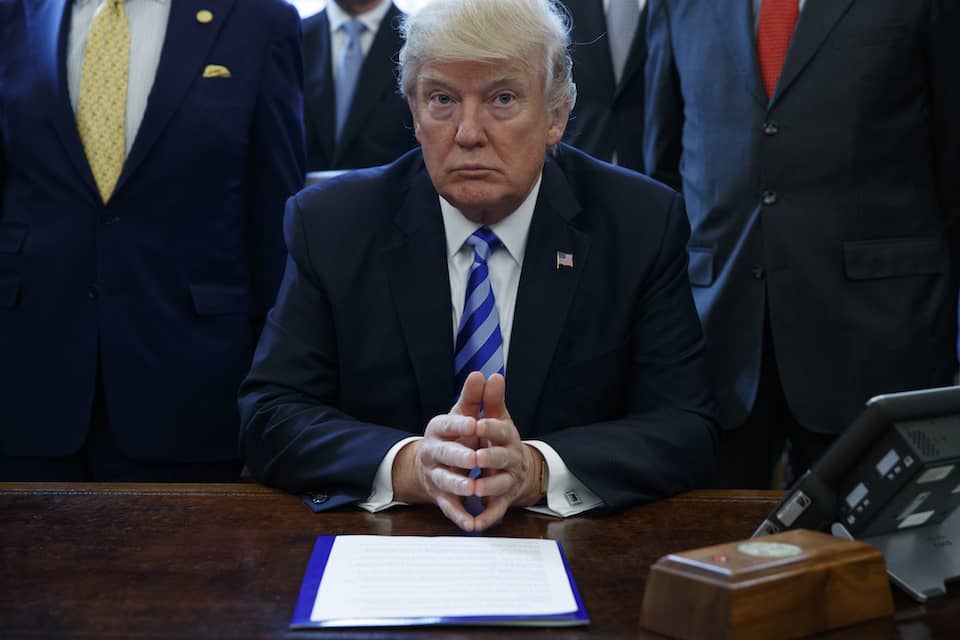 Donald Trump's arguments for the Keystone XL pipeline, whether based on employment or energy, all fail to withstand scrutiny. And in fact, the only people who stand to benefit from the project are his friends in Russia.

Long thought to be dead after its rejection by the Obama administration, TransCanada's Keystone XL Pipeline project has been resurrected under Donald Trump.

The project, which will link the oil-producing tar sands in Canada with oil refineries in Texas, officially received approval this week:

The history of this proposal is fraught with controversy and anger, but Republicans have desperately wanted to make it a reality for years. The problem is that none of the arguments in favor of the pipeline pan out.

Trump claims the pipeline will create 28,000 construction jobs. In fact, the Washington Post found the project would create 10,400 seasonal, temporary construction jobs. And estimates put the total number of permanent full-time jobs created by Keystone XL at just 35 — fewer than the number of rural landowners in Texas alone who lost some or all of their land when TransCanada invoked eminent domain for the pipeline.

Nor can Trump convincingly claim Keystone XL is necessary to meet our energy needs, as gas prices in the United States have been low for years, due largely to the expansion of natural gas production. Besides, most of the oil that would be piped via Keystone XL is already finding its way into America, mostly by rail.

There is an argument that shipping oil by pipeline is safer, cheaper, and produces fewer CO2 emissions than shipping in trains. But leaving aside the fact that the average pipeline accident spills three times as much oil as a train accident, it is a false dichotomy to say the United States must import tar sands oil one way vs another way; this is one of the dirtiest and most dangerous fuel sources in existence, and shipping it by any method carries a risk of spills which would devastate ecosystems and groundwater. The safest option is to reduce our reliance on oil altogether.

In fact, former Democratic Senate leader Harry Reid offered Republicans a compromise deal in 2014, saying he would be open to approving Keystone XL if Republicans worked with him on a comprehensive energy efficiency bill to reduce our overall consumption of tar sands oil. Republicans refused.

So if Trump's plan does not meaningfully create new jobs or improve the energy market, what does it do? It makes his cronies richer.

Previously, Trump promised all pipelines under his administration would be made using American steel. He even said he would revoke eminent domain for oil companies which refused to do so. But he recently backed off his promise.

Instead, 40 percent of the steel used by TransCanada to construct the pipeline will come from Evraz, a Russian-based company partially owned by oligarch, and longtime Trump friend, Roman Abramovich. As it happens, Abramovich lobbied against rules which would have enabled the government to mandate the Keystone XL pipeline be made in America.

Trump's latest actions show once again that his single biggest motivation is monetizing the presidency. Making himself and his rich friends even richer matters more to him than solving the real problems our country is facing. If Trump continues to act against the public interest to serve his personal interests, he may very well jeopardize the well-being of all Americans.