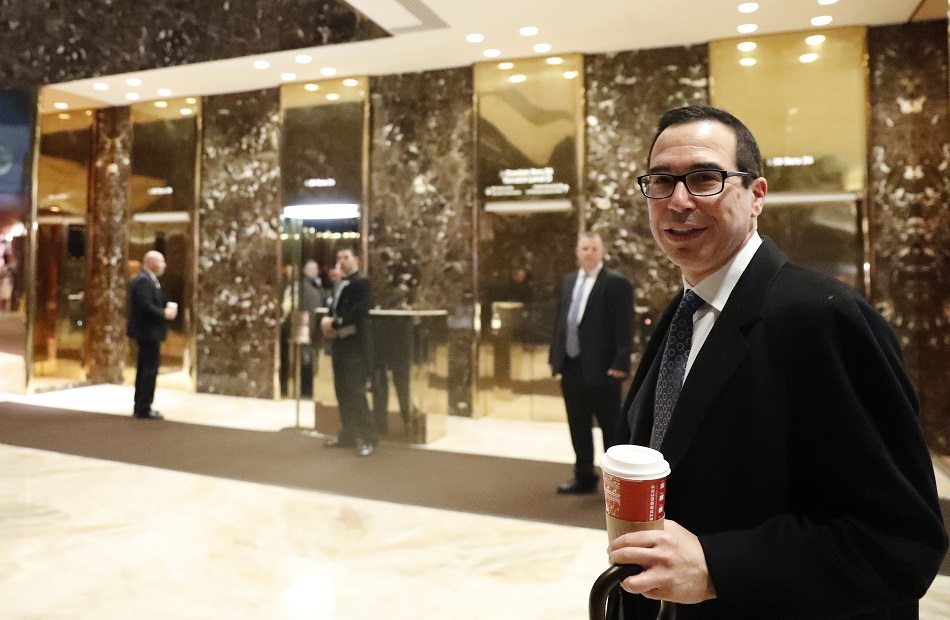 In another move that belies his previous promises to "drain the swamp," Donald Trump will reportedly tap Steven Mnuchin — a former Goldman Sachs partner and the founder of a hedge fund — to be his Secretary of the Treasury, and will nominate billionaire investor Wilbur Ross as Commerce Secretary.

Out of 15 cabinet and 4 advisory positions, President-elect Donald Trump has now filled 10 slots.

In yet another non-swamp-draining move, Trump is reportedly nominating Steven Mnuchin to be his Treasury Secretary, and nominating Wilbur Ross, the billionaire chairman of W.L. Ross & Co., for Commerce Secretary.

Mnuchin, who served as Trump's campaign finance chairman, is the son of a former Goldman Sachs partner who himself became a partner at the financial services company before founding his own hedge fund.

NPR reports that "Mnuchin's resume also includes a stint as chairman and CEO of a California bank that's been called a foreclosure machine." Over 36,000 homeowners were foreclosed on by Mnuchin's company, OneWest.

That is not exactly the resume of an outsider. Nor of a man occupied with improving the lives of working people.

It is an especially curious choice, given that, as Eric Levitz noted at New York Magazine, Trump's final campaign ad used an image of the Goldman Sachs chief executive, Lloyd Blankfein, "as an embodiment of the global elite that has 'robbed our working class.'"

Adam Hodge, Communications Director for the DNC, observed just how galling an affront this selection is:

So much for draining the swamp. Nominating Steve Mnuchin to be Treasury Secretary  – a billionaire hedge fund manager and Goldman Sachs alumnus who preyed on homeowners struggling during the recession – is a slap in the face to voters who hoped he would shake up Washington. Trump is already heading into office as the most corrupt, conflicted, and unpopular president-elect in history, and now he’s breaking his signature promise to the voters who elected him.

Meanwhile, Ross, Trump's nominee for Commerce Secretary, would become, as Jacob Pramuk at CNBC said, "another wealthy businessman making decisions for an administration propelled to the White House by economic populism." Ross has also been helpful to Trump's business interests in the past:

Mr. Ross and Carl C. Icahn, another billionaire investor and supporter of Mr. Trump, were both bondholders in the Trump Taj Mahal casino when it was teetering on financial collapse in 1990. Instead of pushing the casino into an immediate bankruptcy, Mr. Ross and Mr. Icahn worked with Mr. Trump and others to structure a more orderly bankruptcy filing in 1991.

The negotiated restructuring helped Mr. Trump salvage his name and brand at a time when he arguably did not have many friends on Wall Street.

Choices like Ross and Mnuchin should really come as no surprise. Trump simply is who some of us knew he was all along, and he is not about to change now.