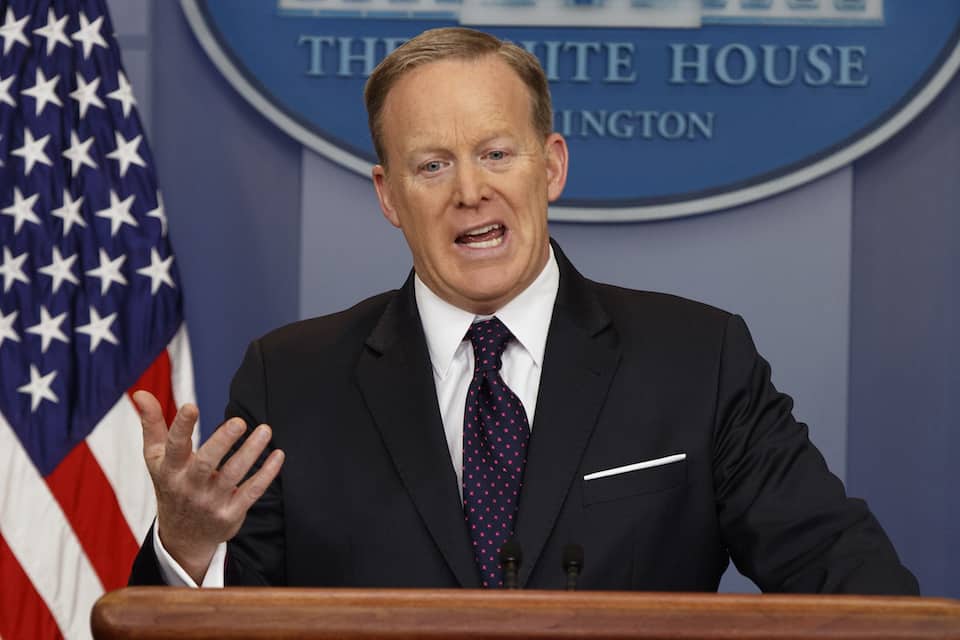 Hours after White House press secretary Sean Spicer was pressed about the Muslim ban language that still appeared on Donald Trump's campaign website, that telltale evidence of discriminatory intent was deleted into oblivion.

Donald Trump's constant bleating about banning Muslims during his campaign has haunted his presidency, making plain the discriminatory intent of his travel ban.

Those words, which have been cited in court filings, remained on Trump's campaign website even after he was sworn into office. Even after he signed the executive order effectively banning Muslims from traveling to the United States. Even after Trump's anti-Muslim rhetoric was cited in court documents to argue against the constitutionality of his ban.

The language remained in place up until Monday afternoon, when ABC News reporter Cecilia Vega asked White House press secretary Sean Spicer about the administration's insistence that it is not a "Muslim ban." Like so many prior occasions, Spicer delivered a sputtering and nonsensical response. Only then was the campaign website finally scrubbed.

VEGA: OK. In the same vein, if this White House is no longer calling this a "Muslim ban," as the president did initially, why does the president's website still explicitly call for, quote, "preventing Muslim immigration"? And it says, "Donald J. Trump is calling for a total and complete shutdown of Muslims entering the United States."

SPICER: I'm not aware of what's on the campaign website. You'd have to ask them. I know how we've talked about this from the first day of this administration — as a travel that's in this country's national security interest to make sure that the people who are coming in here are coming in here with the right motives. The reasons that we're having a public safety aspect to making sure that we're protecting our people — I think that's — we've been very consistent since the first day of this administration on this.

VEGA: Is it worth standing here, though, and completely disavowing the use of that phrase, "Muslim ban"? I mean, it's still on the website. If the president's words are being used against him in court today, is it worth you clarifying that once and for all?

SPICER: I'm trying to figure out why — I've been very clear. I don’t think I need to clarify what we have said or what the president said.

VEGA: Well, it's stuff that's coming up in court. And that's expected to be —

SPICER: I understand that. And that's, frankly, one of the reasons that we have concerns about how that's being interpreted — because I think the intent of the travel ban was very clear. I think it was something that the president made very clear in the filings that we have filed why he did it, the motives for doing it. And he was very clear when he spoke about it from the beginning. So there really shouldn’t be any question as to why the president is doing this, and the idea of making sure that we're putting the safety of our country and people first and foremost.

Minutes later, the language that Vega described was removed from the campaign website:

Minutes after we asked the WH why the President's campaign website still called for a Muslim ban, it appears the statement was deleted. pic.twitter.com/1VzefJuoQF

Even with that deletion, Trump's Muslim ban will continue to haunt this administration. That was evident during Monday's testimony by former Acting Attorney General Sally Yates, who delivered a master class on discriminatory intent to Sen. Ted Cruz (R-TX), and others, at a hearing of the Senate Judiciary Committee.

It was in part because of Trump's own words, which demonstrated his intent, that Yates decided not to defend the Muslim ban in court.

If anything, this Orwellian attempt to erase the evidence of Trump's discriminatory rhetoric and policies will do nothing more than demonstrate consciousness of guilt, and cement the Trump administration's commitment to an alternative reality, populated by "alternative facts."