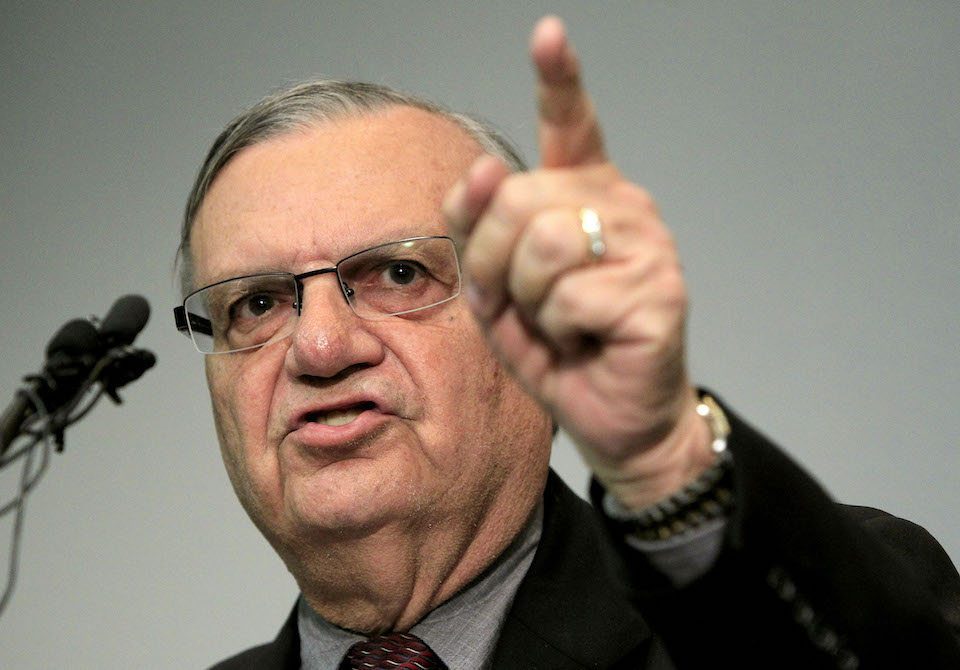 Even though Trump pardoned him, Sheriff Joe Arpaio still wants the court to vacate his conviction.

Sheriff Joe Arpaio and Donald Trump are kindred spirits. Deeply racist, deeply committed to stoking anti-immigrant fears, they are also both deeply lawless. That lawlessness stems from their absolute untouchability.

Trump exhibited his own brand of lawlessness by pardoning Arpaio last Friday. Now Arpaio is doing the same by demanding that the court vacate his conviction, even though he was pardoned.

Essentially, Arpaio's argument is that because he was pardoned before all of his appeals had run their course, it is unfair to him that his conviction remains on the books.

Better still, he threatens that if the district court — the court that convicted him — doesn't vacate the verdict, he will have to appeal to the United States Supreme Court for a jury trial so he can appeal that verdict.

His argument smugly concludes by noting that it will save the judicial system and the taxpayers money just to toss his conviction. Given that he cost taxpayers $70 million, all told, fighting the court's efforts to stop him from singling out Latinos during his immigration raids, his concern about taxpayer money rings very hollow.

A pardon isn't enough for someone like Arpaio. He can't stand the notion that he was ever on trial in the first place because being on trial implies that the justice system applies to him. Trump's pardon made Arpaio into even more of a monster, one that demands complete vindication and subservience from the court.

And even as he revels in his racism, his refusal to acknowledge his guilt or conviction, he demands that his attorneys put out a statement saying he's not a racist, and his conviction had nothing to do with race. The statement references Trump's pardon and defense of Arpaio, as if that is evidence of Arpaio's innocence.

"It is clear by his comments at the rally last Tuesday that the President of the United States believed that the Sheriff’s conviction was wrongful," the statement says, "and that the Sheriff was convicted—as we have contended—for merely 'doing his job.'"

Arpaio is convinced of his innocence and outraged that it was ever questioned in the first place.

And Trump — the man who pardoned Arpaio in the midst of a deadly hurricane because he thought it would make for good TV ratings — is exactly the same. Trump's pardon of Arpaio flouted all the norms: he didn't wait for Arpaio to be sentenced, he didn't consult with the DOJ, he didn't even really give a viable reason for the pardon.

In doing so, he signaled to his fellow travelers who might come under the prosecutorial gaze of special counsel Robert Mueller that they too have nothing to worry about. He will pardon them no matter what, long before a trial, long before a conviction.

And it signals, of course, that he will have no compunction about pardoning himself should Mueller get too close.

This pardon, in other words, was only the beginning of Trump at his most lawless.