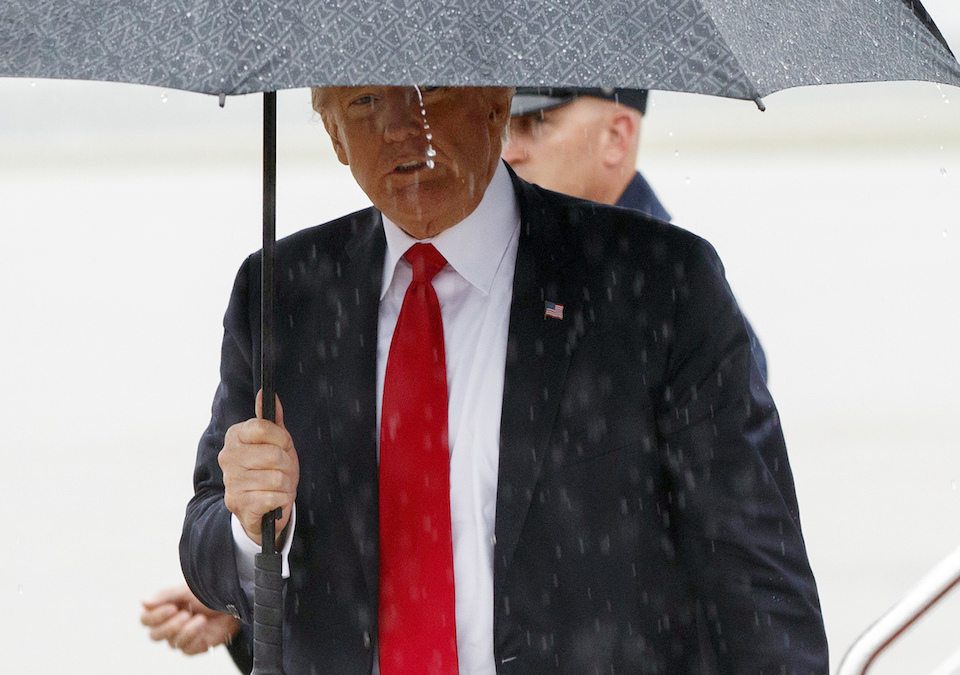 After his promised Obamacare repeal flamed out yet again, Donald Trump lashed out at Senate Republicans, Democrats, and the filibuster — basically, at everyone and everything except himself.

Likely no one expected Donald Trump to accept any responsibility for the failure of the GOP's plan to repeal Obamacare.

And thus, certainly no one was surprised when he took to Twitter Saturday morning to cast blame around as widely as he could.

He lashed out at Senate Republicans, particularly Majority Leader Mitch McConnell; at Democrats, for not wanting to destroy a major Democratic accomplishment; and at the filibuster, because "rule" is a four-letter word for Trump.

Just as he did in the immediate aftermath of the GOP's humiliating defeat, Trump put his pathetic inability to lead and his stubborn refusal to take on any accountability on full display.

Republican Senate must get rid of 60 vote NOW! It is killing the R Party, allows 8 Dems to control country. 200 Bills sit in Senate. A JOKE!

If the Senate Democrats ever got the chance, they would switch to a 51 majority vote in first minute. They are laughing at R's. MAKE CHANGE!

He later issued a bizarre threat to "BAILOUTS for Insurance Companies and BAILOUTS for Members of Congress" if a health care bill was not "approved quickly."

Obviously, wresting health care away from millions of people isn't quite the walk in the park Trump himself insisted it would be.

Yet he cannot bring himself to engage in a moment of self-examination, or to consider that the "CHANGE!" which must be made might be to his own job performance and attention to the matter of governing.

Trump's first six months in office are defined by a dearth of actual achievements, by a marked disinterest in the duties of his office, and by unprecedented levels of disapproval.

As CNBC's John Harwood told Joy Reid, with health care repeal and the rest of the disarray and scandal surrounding this administration, if Trump wants someone to blame, he ought to take a look in the mirror.

"The core problem in the White House" is not the staff, and thus a new firing every day won't fix it.

"It goes to the character of the president of the United States," Harwood declared — which becomes a problem when that president "doesn't have political beliefs — he has a set of impulses and instincts that mostly revolve around him and his well being."

HARWOOD: When you get right down to it, the core problem in the White House, it's not leaking, it's not who his chief of staff is — it goes to the character of the president of the United States. His honesty, his behavior, that's where all of the problem flows from. And so you could replace Reince Priebus, you can put in General Kelly, you can bring in Anthony Scaramucci — it all goes back to President Trump.

Look at what he's done in the last couple of days: He went up to New York yesterday and appealed to fear of immigrants, he was encouraging police officers to rough up criminal suspects. This is somebody who doesn't have political beliefs — he has a set of impulses and instincts that mostly revolve around him and his well being. That's why he is not really connected to republican philosophy, republican policies.

I talked yesterday to an ally of Reince Priebus and Paul Ryan who said the next phase of the Trump White House is going to be to disconnect itself from the Republican Party and go to war with the Republican Congress. And what did we wake up to this morning? A president who is tweeting that Republican senators look like fools, Democrats are laughing at them, and ordering Mitch McConnell to blow up the filibuster. Donald Trump is the issue, it's not his staff.

During the campaign, Trump pompously told the nation, "I alone can fix" any problems in Washington and across the country.

But if he wanted to paint himself as a one-man rescue squad in anticipation of legislative victories, then it is stunningly disingenuous to refuse any accountability whatsoever in the face of multiple, massive defeats.