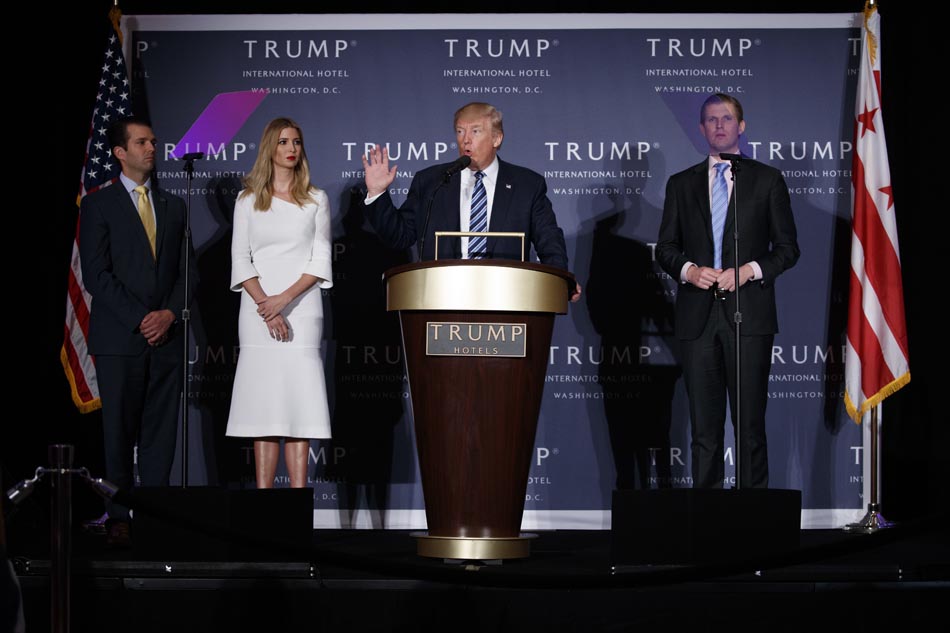 Donald Trump offered a promise on Twitter to take himself "completely out of business operations" from the Trump Organization in order to fully focus on the presidency and avoid conflicts of interest. But as his own words and actions illustrate, it is merely the appearance of propriety with which he is concerned.

In the early morning hours, President-elect Donald Trump took to Twitter to address the conflict of interest concerns which have cropped up in the weeks since the election:

I will be holding a major news conference in New York City with my children on December 15 to discuss the fact that I will be leaving my ...

great business in total in order to fully focus on running the country in order to MAKE AMERICA GREAT AGAIN! While I am not mandated to ....

do this under the law, I feel it is visually important, as President, to in no way have a conflict of interest with my various businesses..

Hence, legal documents are being crafted which take me completely out of business operations. The Presidency is a far more important task!

The word “visually” in the third tweet is doing a lot of work, but you would not know it from reading a number of prominent headlines.

The New York Times declared “Trump Vows Steps to Avoid Appearance of Business Conflicts.” The Washington Post said “Trump announces he will leave business ‘in total’ - leaving open how he will avoid conflicts of interest.” Fox News, unsurprisingly, took him at his word: “Trump says he’s leaving his businesses to focus on presidency.”

But the key point here is that Trump’s vow was not to leave his business dealings altogether, but to craft legal documents to take him “out of business operations” because it is “visually important” to avoid conflicts of interest. He has not, to this point, pledged to liquidate his real estate holdings and assets and place them in a blind trust, and there is no indication that he plans to do so.

He is not so much stepping aside as he is handing the reins of his business to someone else, leaving him the opportunity to make presidential decisions that affect his holdings.

Even if he does not have operational control of his Washington, D.C., hotel, for example, the licensing of his name still creates conflicts because foreign dignitaries and diplomats have already indicated that they will favor Trump hotels and resorts in an effort to curry favor. Thus, Trump can still benefit materially from the business while being able to plausibly deny any such arrangement.

This is a particular concern if he follows through on his campaign promise to hand the business over to his children, Ivanka, Eric, and Donald Jr., who have played a major role in his transition team and are likely to have unofficial roles within the administration. Keeping the business within his immediate family is hardly full divestment.

Trump’s tweets are simply smoke and mirrors to respond to and silence media coverage of his conflicts of interest, and an acknowledgement that retaining control of his business dealings as president-elect would make for poor optics.

All Trump has really pledged here is to avoid the appearance of conflict, rather than to avoid actual conflict. And appearances can be deceiving — something Trump likely understands better than almost anyone else.