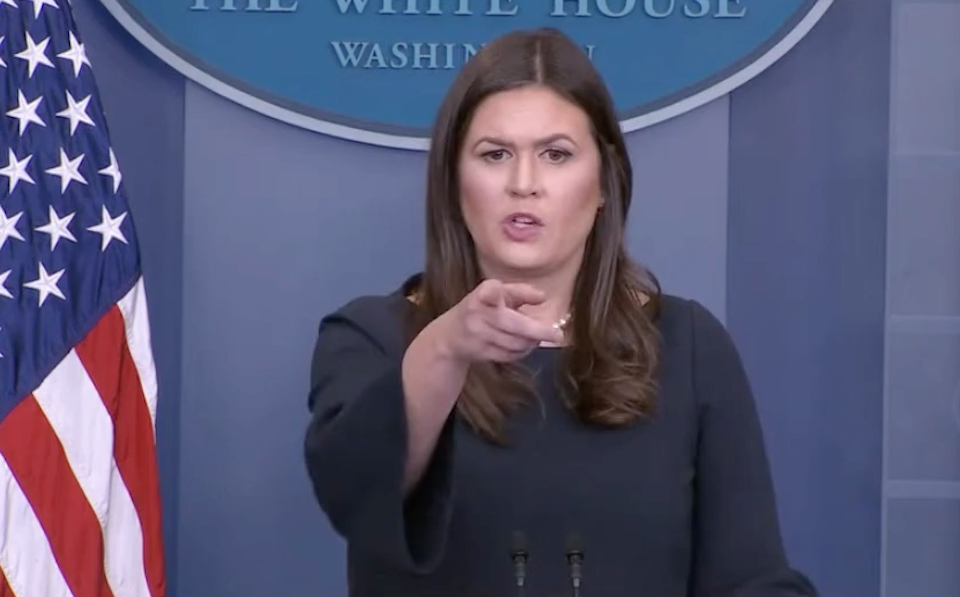 Trump attacked black athletes who protest racist police brutality and said they should be fired. Now his press secretary says that's a position "every American can get behind and support and celebrate."

The NFL and many of the Americans who support the sports league have come out in opposition to Donald Trump's attacks on players who are protesting racism.

White House press secretary Sarah Huckabee Sanders made clear that the administration believes "every American" should support Trump's horrendous position that an athlete who protests racism is a "son of a bitch" who should be silent — or be fired.

Sanders' rhetoric echoes Treasury Secretary Steve Mnuchin, who declared that once on the field, players forfeit the right to individual expression, and instead have to keep their lips sealed despite their obligation to speak out on moral issues.

Sanders distorted Trump's days of attacks on black athletes by saying he is simply defending the flag and the national anthem, telling reporters that backing Trump's anti-speech impulses "should be something that every American can get behind and support and celebrate as a national pride in our country."

REPORTER: Sarah, from this podium, you've often expressed some frustration about the media not focusing on the agenda that the president has, substantive issues, things he wants to get done: tax reform, health care, et cetera. When did the president decide at the rally that he was going to spend so much time talking about the flag itself? And doesn't that distract from the things that you are trying to accomplish this week, whether it's tax reform, or health care, or the efforts in Puerto Rico, or the showdown with North Korea?

SANDERS: Look, I certainly don't think that talking about the American flag is a distraction for the president of the United States. Again, this should be something that every American can get behind and support and celebrate. It's national pride in our country. And supporting those that have fought and died to defend it, from all different backgrounds. And so I think, again, that that certainly should be a priority of the president. But you act like that's all he did over the weekend.

Trump and his administration has demonstrated that they do not understand the issue at hand in this ongoing protest, nor is Trump capable of comprehending that opposition to racial injustice is what is motivating so many to side with the players and coaches.

Trump promoted a hashtag, "#StandForOurAnthem," which did not trend and is an order. He also said the NFL "must" respect the idea that kneeling "has nothing to do with race," but the protesting players have made it plain that it does. They are against systemic violence from police officers, targeted at people of color, especially black men, women, and even children.

He also said "sports fans should never" condone players who do not stand, expressly showing that he does not understand that freedom of expression gives the players the option to kneel.

Americans don't have to back Donald Trump on this issue, and millions don't, no matter how many times he impotently tweets that they have to.

Trump invents voter fraud story to oppose absentee voting — even though he does...