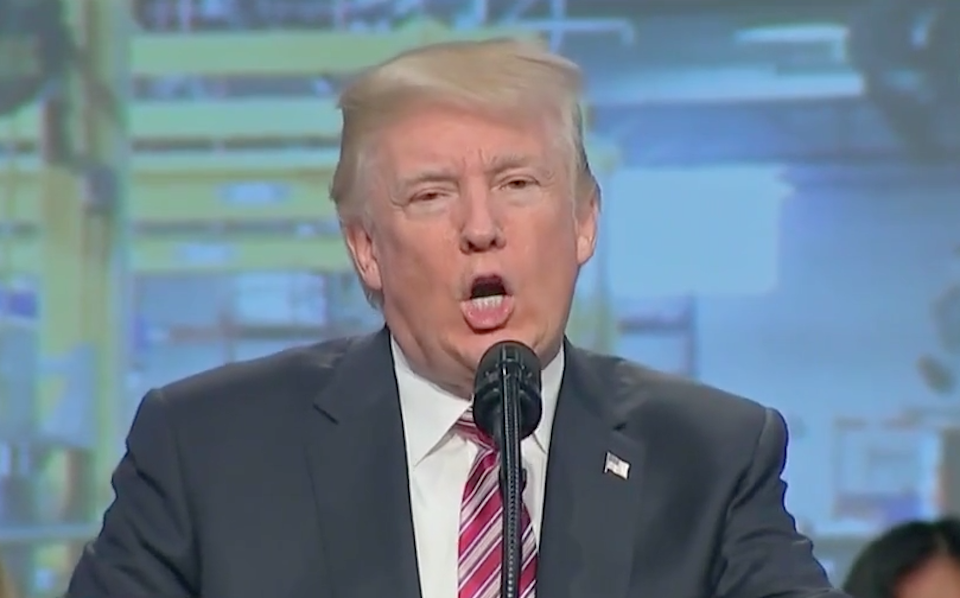 Donald Trump continues to make sad excuses for his administration's lackluster response to the hurricane in Puerto Rico, singling out "big water" and "ocean water" as obstacles to doing his job in the region.

Donald Trump continued to blame the geography of the earth for his administration's ongoing failure to rapidly respond to the post-hurricane crisis in Puerto Rico, citing the "big water" around the island.

Speaking before an event at the National Association of Manufacturers, Trump spoke about relief efforts, and insisted his administration was mounting a major response to the disaster. Critics have called the Trump response "abominable," "criminal," and "cruel," while the mayor of San Juan pleaded for help from Trump in an appearance on CNN.

In his remarks, Trump tried to hold back the criticism, describing Puerto Rico as "an island surrounded by water. Big water. Ocean water." Previously, Trump said the response was slow because the island is located in a "very big ocean."

TRUMP: All of appropriate departments of our government, from Homeland Security to Defense, are engaged fully in the disaster, and the response and recovery effort probably has never been seen for something like this.

This is an island. Surrounded by water. Big water. Ocean water.

Under President Barack Obama, the United States mobilized quickly to respond to the horrific earthquake that rocked Haiti in 2010. The Washington Post noted that the American response was massive and rapid:

Before dawn the next morning, an Army unit was airborne, on its way to seize control of the main airport in Port-au-Prince. Within two days, the Pentagon had 8,000 American troops en route. Within two weeks, 33 U.S. military ships and 22,000 troops had arrived. More than 300 military helicopters buzzed overhead, delivering millions of pounds of food and water.

Like Puerto Rico, Haiti is also "an island surrounded by big water, ocean water." And even more damning to Trump's excuse-making, the citizens of Puerto Rico are American citizens who aren't being helped in the speed and scale that they deserve.

Neither "big water" nor "ocean water" are to blame for Donald Trump's failure to lead.