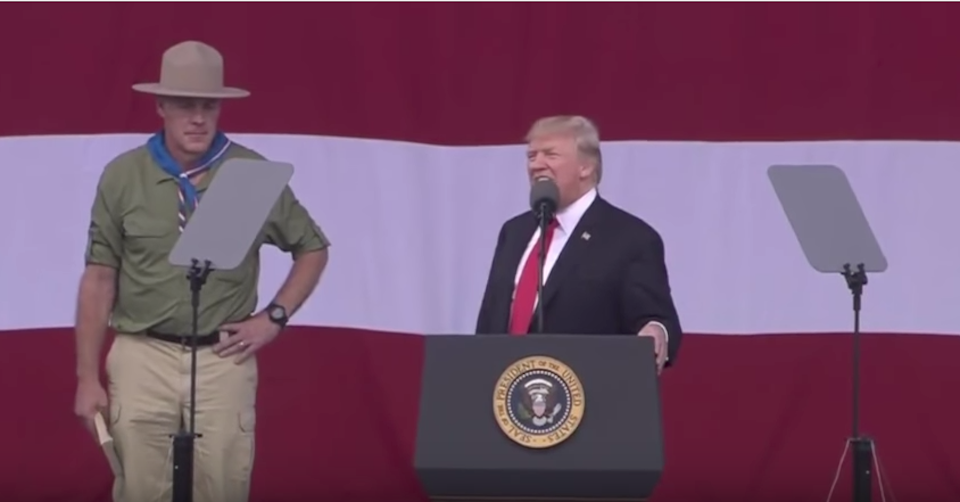 Donald Trump's behavior is so inappropriate and offensive, he forced the Boy Scouts to apologize for subjecting children to his toxic rhetoric.

Donald Trump's shockingly inappropriate speech to the Boy Scouts is an official disgrace.

The response to Trump's rant — in which he whined about "fake news," boasted about his electoral college win while complaining about the unfairness of the system, and inspired boos against President Barack Obama and Hillary Clinton — was swift and outraged.

Parents threatened to pull their children out of the program. Rep. Sheila Jackson Lee (D-TX) gave a speech from the House floor, condemning the president for disrespecting the organization of which her son and husband are members.

And now the head of the Boy Scouts has been forced to apologize.

"I want to extend my sincere apologies to those in our Scouting family who were offended by the political rhetoric that was inserted into the jamboree," he said. "That was never our intent."

The organization has invited the sitting president to address the group since 1937. Several presidents have attended. But Trump, as in so many situations, was the first to violate protocol and tradition, by inserting his ugly, partisan rhetoric into what is supposed to be a lighthearted opportunity for the commander in chief to offer words of encouragement about the Boy Scouts' values of "trustworthiness, loyalty, kindness and bravery."

During the 2016 campaign, Clinton warned of the dangerous effect a Trump presidency would have on America's children.

"Our children and grandchildren will look back at this time," she said, "at the choices we are about to make, the goals we will strive for, the principles we will live by — and we need to make sure that they can be proud of us."

She was right, of course, about that and so many other things. But now America's children are subjected to Trump and his hateful, heartless, horrifying words and deeds. He cannot even be trusted to give an appropriate speech to those children.

No wonder the Boy Scouts are sorry. So many, many Americans are.