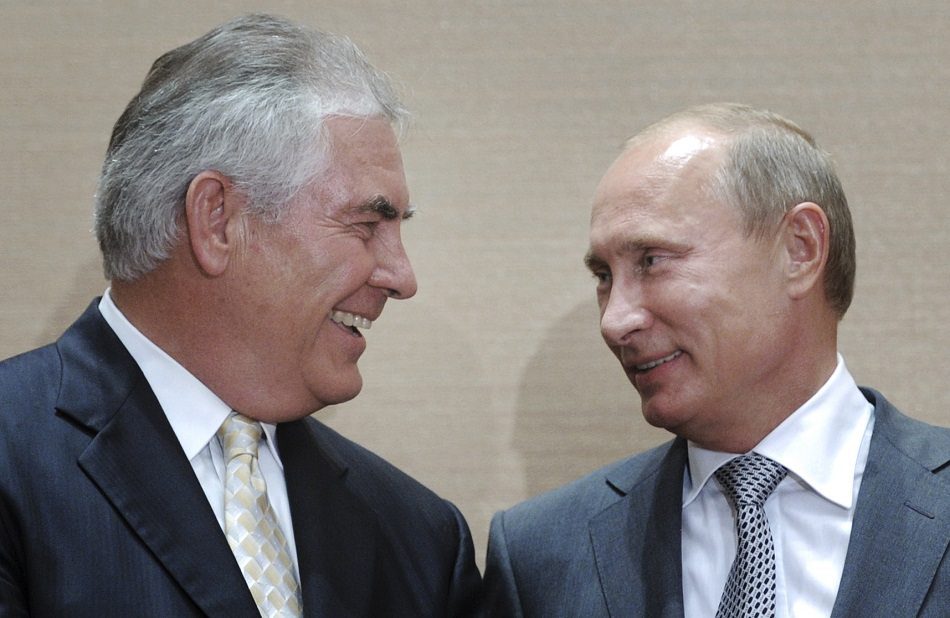 (AP photo/RIA Novosti, Alexei Druzhinin, pool)
Get The American Independent in your inbox

President-elect Donald Trump's pick to lead the State Department, ExxonMobil CEO Rex Tillerson, is already known to have deep and lasting ties to the Russian government. And new reporting shows Tillerson's Russia connections reach back a long way, and further exposes the need for stringent vetting of his business record.

Secretary of State-designate Rex Tillerson worked for years to finalize a half-trillion-dollar deal with the Russian government, one which earned him an Order of Friendship and a champagne toast from Russian President Vladimir Putin.

Now, new reporting shows Tillerson's Russia connections go even further back. According to public documents leaked to a German newspaper, Tillerson became a director of ExxonMobil's Russian subsidiary in 1998:

Rex Tillerson, the businessman nominated by Donald Trump to be the next US secretary of state, was the long-time director of a US-Russian oil firm based in the tax haven of the Bahamas, leaked documents show.

Tillerson – the chief executive of ExxonMobil – became a director of the oil company’s Russian subsidiary, Exxon Neftegas, in 1998. His name – RW Tillerson – appears next to other officers who are based at Houston, Texas; Moscow; and Sakhalin, in Russia’s far east.

ExxonMobil insists that the dozens of subsidiaries they have incorporated in the Bahamas are not an attempt to avoid taxes, but Bahamanian banks are also notorious for secrecy — which means that unless Tillerson is compelled to make disclosures, Americans will just have to take Exxon's word for it.

Either way, this demonstrates that Tillerson has spent almost twenty years trying to exploit Russian resources for profit.

The revelation comes as reporting on another Trump pick, Commerce Secretary-designate Wilbur Ross, shows partnerships with wealthy Russian businessmen and allies of Putin.

Coupled with Trump's continued refusal to condemn or acknowledge Russian government interference with our election, these developments are cause for serious concern, and underscore the duty of Congress to investigate Trump's picks carefully.